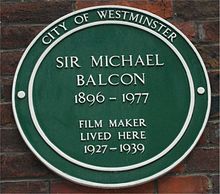 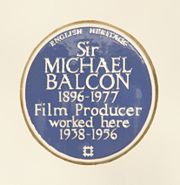 Born in Birmingham, Balcon was the youngest son and fourth of five children of Louis Balcon (c.1858–1946) and his wife, Laura Greenberg (c.1863–1934), Jewish immigrants from Eastern Europe who had met in England. Growing up in a respectable but impoverished setting, in 1907 Balcon won a scholarship to Birmingham's George Dixon Grammar School, where a plaque is erected,[3] but had to leave in 1913 owing to his family's financial needs. He worked as a jeweller's apprentice, was turned down for service in World War I because of defective eyesight, and joined the Dunlop Rubber Company's huge plant at Aston Cross in 1915, rising to become personal assistant to the managing director.

After the war, Balcon's friend Victor Saville suggested a partnership to establish a film distribution company. The company, Victory Motion Pictures, led to them settling in London, and an office in Soho was opened in 1921. In 1923, their first feature film was released, the successful melodrama Woman to Woman, starring Clive Brook and Betty Compson and directed by Graham Cutts. They leased Islington Studios and formed the more long lasting Gainsborough Pictures.

The studio, recently vacated by the Hollywood company Famous Players-Lasky (later Paramount Pictures) was small but well equipped and fully staffed. A young Alfred Hitchcock was one of its employees. Balcon gave Hitchcock his first directing opportunity, and Gainsborough gained a reputation for producing high-quality films.

By the late 1920s, Balcon's independence had eroded and Gainsborough became an extension of the Gaumont Film Company. Still, between 1931 and 1936, Balcon produced a number of classics, including a string of Hitchcock successes (like The 39 Steps) and Man of Aran, known as 'Balcon's folly' for going well overbudget. He also helped individuals escape Nazi Germany, including the actor Conrad Veidt, who had starred in his 1934 film Jew Suss. By 1936, Gaumont was looking for an entry into the American market, Balcon spent several months in the country forming links with the big Hollywood studios. On his return, he found Gaumont in financial ruin and joined MGM-British Studios that November. The year and a half he spent there was a trying period for Balcon, who clashed frequently with studio head Louis B. Mayer.

When Balcon was invited to head Ealing Studios in 1938, he readily agreed. Under his benevolent leadership and surrounded by a reliable team of directors, writers, technicians and actors, Ealing became the most famous British studio in the world, despite turning out no more than six feature films a year. Went the Day Well?, Dead of Night, Undercover (1943), and of course the Ealing comedies were released during his time there. Other films from the studio include Dance Hall (1950) with Petula Clark and Diana Dors; and The Blue Lamp (also 1950), whose lead character, George Dixon, took his name from Balcon's school, and later resurfaced in the long-running television drama Dixon of Dock Green. In his 1969 autobiography, Michael Balcon Presents... A Lifetime of Films, he wrote that his years at Ealing Studios were "the most rewarding years in my personal career, and perhaps one of the most fruitful periods in the history of British film production."

Besides Hitchcock, he worked with Basil Dearden, Michael Relph, and many other significant figures of British film. He was knighted in 1948. Ealing declined during the 1950s, and Balcon's creative control at other companies waned considerably after it was sold.

In 1959 Balcon became chairman of Bryanston Films, a subisdiary of British Lion Films.[4] The firm went bankrupt in 1963 with Balcon taking over British Lion Films. Still, he was proud to be associated with the British New Wave; the last film on which he worked as executive producer was Tom Jones (1963), after which he continued to encourage young directors, serving as chairman of the British Film Institute production board and funding low-budget experimental work.

Balcon was an avid theatre and opera goer, loved travel (especially to Italy), and had a wide circle of friends. In 1977, he died peacefully at Upper Parrock, the fifteenth-century house set on a Sussex hilltop near the Kent border where he and his wife had lived since the Second World War. He was cremated and his ashes buried there.

A pub in Ealing is named in his honour.[5]

On 10 April 1924, Balcon married Aileen Freda Leatherman (1904–1988), daughter of Max Jacobs and Beatrice Leatherman, born in Middlesex, but brought up in Johannesburg. In 1946 she was appointed MBE for her war work. Their marriage was happy and lasted until Balcon's death. They had two children: Jill (1925–2009), and Jonathan, born 1931. His daughter Jill Balcon became an actress, his son-in-law Cecil Day-Lewis was an Irish-born Poet Laureate, and his grandson is the successful Oscar-winning actor Daniel Day-Lewis.