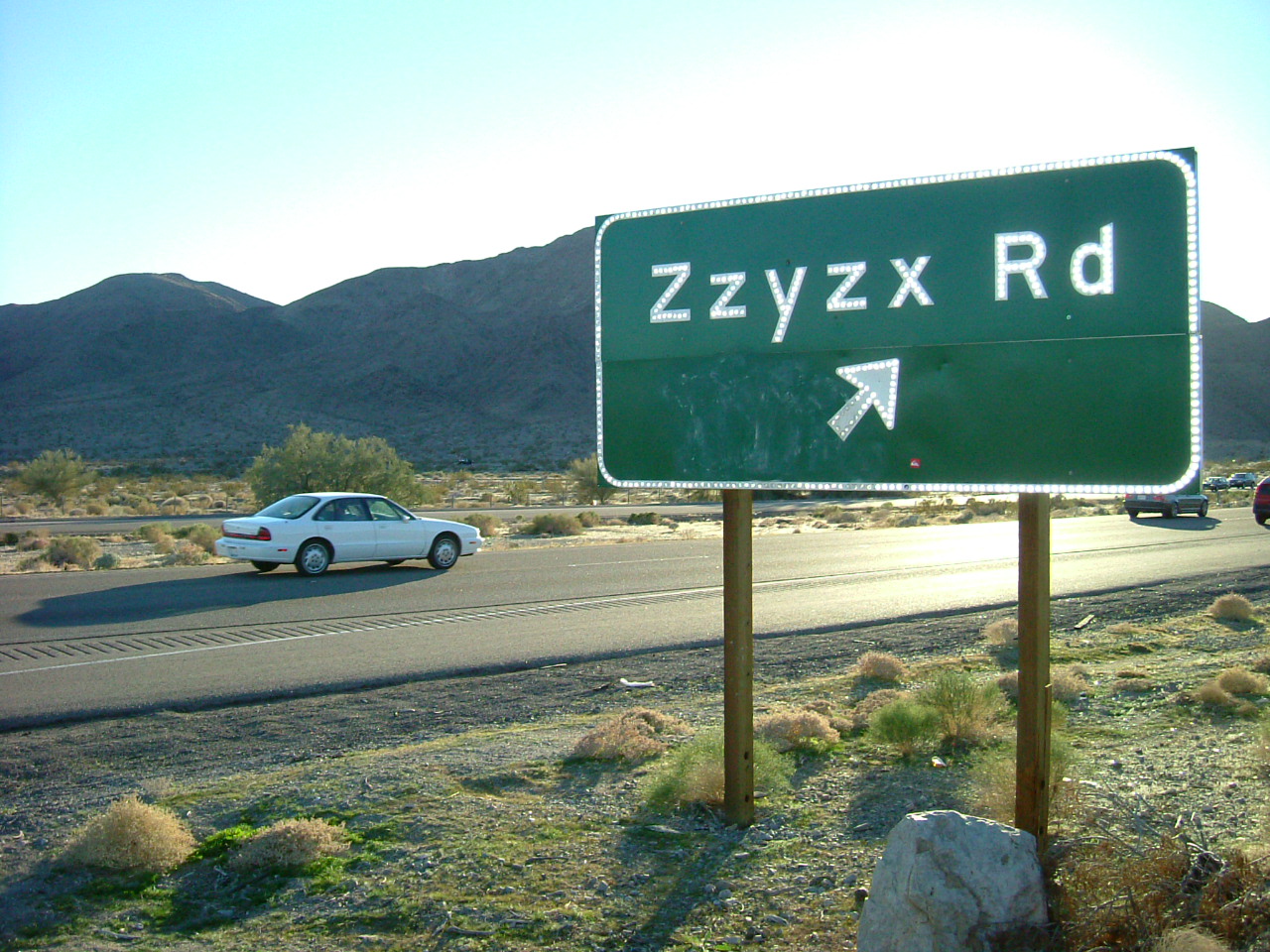 Zzyzx, California is a settlement in San Bernardino County, , formerly the site of the Zzyzx Mineral Springs and Health Spa and now the site of the . The area is also the location of , one of the refuge habitats of the endangered .

Zzyzx Road is a convert|4.5|mi|km|adj=on long, part paved and part dirt, rural in the . It runs from Interstate 15 generally south to the Zzyzx settlement.

, a natural spring, has long seen human activity. The area was a quarry site, and projectile points and rock art can be found in the area. The ran past the spring, as did the . Remnants of a wagon road stop and railroad artifacts are readily seen. Evaporative salt mining and mill sites can be found here as well.

The name Zzyzx, pronEng|ˈzaɪzɨks, was given to the area in 1944 by , claiming it to be the last word in the English language. Springer made up the word's pronunciation. He established the Zzyzx Mineral Springs and Health Spa in 1944 at the spot, which was federal land, after filing mining claims for 12,000 acres surrounding the springs. He used the springs to bottle his water and provide drinks for travelers through the hot desert. Curtis also imported animals from around the country to attract more families to visit his ranch. He used Zzyzx until 1974, when he was arrested by the for misuse of the land as well as alleged violations of food and drug laws, and the land was reclaimed by the government.

Since 1976, the has allowed to manage the land in and around Zzyzx. A consortium of CSU campuses use it as their .

"" magazine verified the source of the lexicography as an undated San Bernardino County map published by the . The magazine characterized Zzyzx Springs as "a hydrologic feature and a privately owned spa catering to the senior citizen, about 8.5 mi. (13.7 km) south of Baker on the western edge of Soda Dry Lake, off the abandoned right-of-way of the old ."

Zzyzx was approved as a place name by the on , . As is the case with the road, Zzyzx, California, is the USBGN's lexicographically greatest (alphabetically last, at least in English alphabetical order) place name.

* There are films titled "Zzyzx" [ [http://imdb.com/title/tt0420346/ Zzyzx on IMDB] ] and "" (also called "Zyzzyx Rd.") [ [http://imdb.com/title/tt0429277/ Zyzzyx Rd. on IMDB] ] (Note the different spelling for "Zyzzyx Road".)
* 's novel "Captain Zzyzx" takes its name from Zzyzx Road: the book's title is also the name of a band that the protagonist, Harmon Nails III, performs in. In the book, the musician Nails saw the road sign while driving on I-15, was compelled to pull off the highway to drive down Zzyzx Road, and swore that the next band he played in would be called "Captain Zzyzx".
* 's novel "The Narrows" featured Zzyzx prominently.
* 's second album "" contains a song named ""
* 's album "Absolutes" has a song named "Zzyzx Scarecrow", which appears on the compilation album "Collective" as "Zzyzx".
* The Norwegian-American band named an album after the town, supposedly after they passed it while on tour.
* In 2000 computer game Sacrifice, there is a character called Zzyzx.
* There is a card in the parody expansion called [http://ww2.wizards.com/Gatherer/CardDetails.aspx?name=Zzzyxas's+Abyss Zzzyxas's Abyss] .
* Two characters in the TV show were created in a secret laboratory called Zzyzx.
* is an arcade game made by in 1982.
* 's language uses the "ZZYZX" parameter name for the height of their objects.
* "Zzyzx Road" is the title of a composition by pianist [http://www.tinylightsmusic.com Justin Solonynka] . Different recordings can be found on his albums "Bull in a China Shop" and "A Better View".
* Zzyzx appears in Virgin America's promotional video called Virgin America's-Virgin Americans. The opening title says " Somewhere over Zzyzx, CA"
* Catalog clothing company offers a jacket named "ZZYZX FIELD COAT" [http://www.territoryahead.com/mercadoSearch.do?action=search&newSearch=true&freeText=110444&Search.x=38&Search.y=17]
* The Aug 8, 2008 comic strip Drabble references Zzyzx road as a word in a spelling bee

*
* for more information about the health spa
*
*
* (disambiguation and other uses)