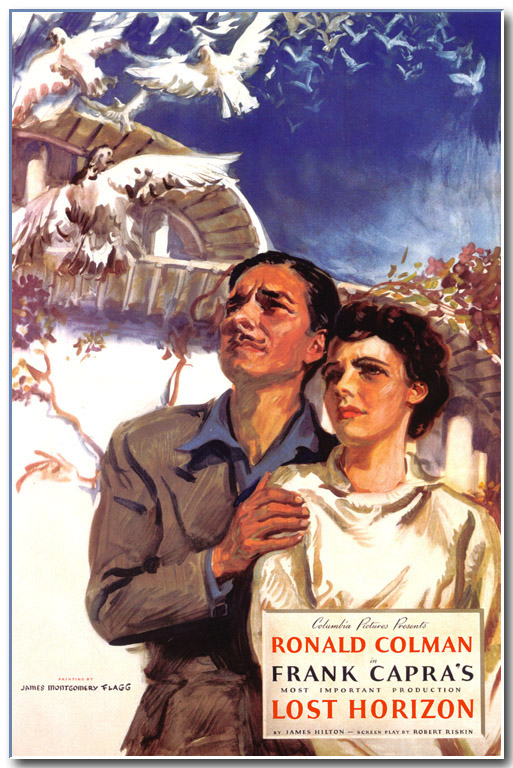 "Lost Horizon" is a directed by starring , and Sam Jaffe. It tells the story of a group of travelers who find a n society in the mountains. The film is based upon the novel of the same name and was adapted by (uncredited) and . The sets were designed by .

Artistically, "Lost Horizon" evokes many of the themes associated with Capra as an but is somewhat darker and at times, cynical, as with much of his early work.

It was remade as a musical in 1973; however, it was a notorious critical and commercial failure.

Fleeing unrest in China, a small group of airplane passengers is hijacked by the pilot. The plane eventually runs out of fuel and crashes deep in the s, killing the abductor. The group is rescued by Chang () and taken to , an idyllic valley sheltered from the cold. The contented inhabitants are led by the mysterious High Lama ().

Initially anxious to return to "civilization", most of the newcomers grow to love the place, including academic Alexander Lovett (), swindler Henry Barnard (Thomas Mitchell), and terminally ill Gloria Stone (), who miraculously seems to be recovering. High-ranking British diplomat Robert Conway () is also enchanted, particularly when he meets Sondra (), who has grown up in Shangri-la. However, Conway's younger brother George (John Howard) and Maria (Margo), another beautiful woman they find there, are determined to leave.

Conway eventually learns that his arrival was no accident. He was brought there by the High Lama to take his place. The founder of Shangri-la claims to be hundreds of years old, preserved, like the other residents, by the magical properties of the paradise he has created, but is finally dying and needs someone wise and knowledgeable in the ways of the modern world to keep it safe.

George refuses to believe the Lama's fantastic story and is backed up by Maria. Torn between love and loyalty, Conway reluctantly gives in to his brother and they leave, taking Maria with them. After several days of gruelling travel, she becomes exhausted and falls face down in the snow. When they turn her over, they discover that she has died...of extreme old age. Her departure from Shangri-la had restored Maria to her true age. Horrified, George loses his sanity and jumps to his death.

Conway continues on and eventually meets up with a search party sent to find him, though the ordeal has caused him to lose his memory of Shangri-la. On the voyage back to England, he remembers everything; he tells his story and then jumps ship. The searchers track him back to the Himalayas, but are unable to follow him any further. In the final scene, Conway returns to Shangri-la, to the waiting Sondra.

Famously, Frank Capra personally presided over the burning of the first reel of this film after a disastrous preview. This footage has never been restored.

No complete original print of this movie is known to have survived, as several reels of the original nitrate negative deteriorated in the late 1960s. Several years after its initial release, an "edited" version was presented, which aimed to downplay the supposedly themes associated with utopia, as well as to limit the sympathy shown towards the Chinese, whose relationship with the American government grew strained in the years following . A total of twenty-seven minutes was cut.

A combination of the collapse of the and an interest in restoring old films resulted in an attempt in the 1970s to find an original print of the film. As is often the case, this meant examining archives of early Hollywood films overseas, where reels were frequently neglected. The original soundtrack was recovered intact, but seven minutes, spread out over several scenes, remain either compromised or lost.

According to an introduction in the print shown on , the and have restored as much as possible, and have used still photos to fill out the missing scenes. Subsequent releases of "Lost Horizon" on both video and DVD present a restored version that is close as possible to the original theatrical release. All 132 minutes of the original soundtrack have been recovered, whereas only 125 minutes of film footage was located. Some of the restored footage is faded and fuzzy in appearance due to the deteriorated condition of certain sections of the recovered film. As to the seven minutes of film footage still missing, a combination of publicity photos of the actors in costume (taken during filming) and still frames copied from elsewhere in the film is shown while the soundtrack plays. The introduction to the restored version proclaims " [their] search for the missing footage goes on".

According to film historian Kendall Miller in the documentary bonus feature on the "Lost Horizon" DVD, the exterior of the lamasery was built on the Columbia Ranch in , and took a month and a half to construct. The outdoor scenes showing the daily lives of villagers and Conway and Sondra's horseback ride were filmed in Sherwood Forest (), north of , except for the waterfall scene, which was shot in . An aerial shot of Ojai Valley taken from an outlook on Highway 150 was used in the scene where Chang points out Shangri-la to Conway. The Tibetan high plateau where the hijacked plane lands for refueling was a dry lake bed on the southern edge of the in , CA, a location also used for 's "Stagecoach".

The movie is notable for the visible breath of the actors in the scenes inside the frigid, crashed aircraft and on the frozen trek to Shangri-La. These sequences were some of the first to be filmed inside the Los Angeles Ice and Cold Storage Warehouse, at a temperature between 20-24 degrees Fahrenheit.

Scenes of the avalanche and the vast frozen landscape of the came from a documentary. According to , the director's son, "Lost Horizon" would have been filmed in color, but because the only suitable stock footage was in black and white, his father decided to shoot his movie that way. [ [http://www.editorsguild.com/v2/magazine/archives/0507/columns_history.htm Editors Guild Magazine - Columns - Maggie's Corner ] ]

* as Robert Conway
* as Sondra Bizet
* as Chang
* as the High Lama
* as George Conway
* as Alexander P. Lovett
*Thomas Mitchell as Henry Barnard
*Margo as Maria
* as Gloria Stone