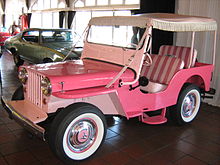 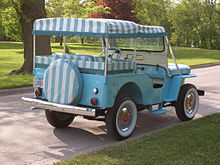 The Dispatcher Jeep, or DJ, was a two-wheel-drive variant of the CJ series. Production started in 1955 by Kaiser that became Kaiser-Jeep in 1963. In 1970 American Motors (AMC) purchased Kaiser’s money-losing Jeep operations establishing AM General, a wholly owned subsidiary, that built this model through 1983.

The DJ-3A was introduced in 1955. It used the body style of the older CJ-3A, along with the L-134 engine. Unlike the CJ-3A, it came with either a column shift or floor shift three-speed Borg-Warner T-96 manual transmission. It was offered with many different body options including a soft top, hard top, or even a full van body.

In early 1959 Willys introduced the Jeep Gala to the export markets and uses desiring the nimble size and open bodywork, but no need for four wheel-drive.[1] This model gained popularity as a "fun car" at resorts in Hawaii, Mexico, and islands in the Caribbean area. It was finished in pink, green, or blue and trimmed with matching white striped fabric, as well as with fringe on its top.[1]

In fall of 1959, a similar model called the Jeep Surrey was introduced in the U.S. market. The primary target market were resort hotels and vacation centers.[2] It also served as a low-cost rental vehicle for their guests. The Surrey came with a standard striped fabric top, as well as a matching fabric cover for what was advertised as a "Continental tire mount."[3]

The DJ-5A was introduced in 1967, beginning the lettering system indicating changes within the series.

The DJ-5A (Kaiser Co.) used a standard CJ front end, with a 4-cylinder Chevrolet Nova 153 cu in (2.5 L) engine and 2-speed Powerglide automatic transmission. In 1971, this was changed to a unique 5-slot grille without turn signals that was used only on postal Jeeps. The 1971 model actually has the grille extend past the front of the hood edge. This allowed more room for the AMC Straight-6 engine and radiator. While resembling the CJ series, these were built as a completely enclosed, rear-wheel drive vehicle, with sliding doors (which could be opened while driving), and a swinging rear door. Most models only had the driver's seat and a mail tray where the second seat would normally be located. One improvement over earlier Jeeps was mounting the rear springs outside of the frame rails, thus providing greater stability for the vehicle with its top-heavy enclosed cargo area, especially at highway speeds. Most models were also equipped with a limited slip differential and a heavy-duty steering gearbox.

AM General used a variety of powerplants during production. DJ production was ended in 1984 with the DJ-5M, which used the 150 cu in (2.5 L) AMC Straight-4 engine.

Similar in appearance and in most of its dimensions, the DJ-5E was powered by a set of two 27-volt lead-acid batteries with a 54-volt 30 bhp (22 kW; 30 PS) compound wound DC motor with electronic regulation made by Gould Electronics.[5] The U.S. Postal Service purchased 352 units for the use in cities with serious air pollution.[6] The Electruck was capable of cruising at 33 mph (53 km/h) with a range of 29 mi (47 km) with 20% of its battery power still remaining in reserve.[6]

USPS logo and other recent changes

Even though this vehicle was discontinued about ten years before the eagle logo for the United States Postal Service was changed to a blue and white envelope shaped like a bird head, some surviving DJs on the USPS fleet had the new logo painted on the doors.

Current day Jeep Wranglers are modified to have right-hand drive in more rural places for USPS delivery in more rural areas of North America. These have replaced Jeep DJs for the USPS role.