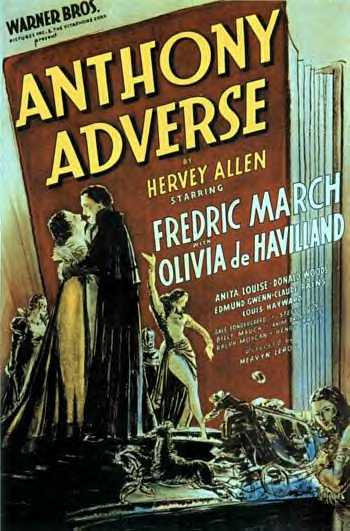 "Anthony Adverse" is a 1936 American directed by . The by Sheridan Gibney was based on the sprawling 1,224-page novel of the same title by . Neither , who assisted with the direction, nor Milton Krims, who contributed to the script, received on-screen credit for their work.

The plot of the epic follows the globe-trotting adventures of the title character, the illegitimate offspring of Maria Bonnyfeather, the wife of ailing middle-aged nobleman Marquis Don Luis, and Denis Moore. When he learns of his wife's affair, Don Luis challenges her lover to a duel. Denis is killed, and shortly thereafter Maria dies in childbirth. Don Luis leaves the infant at a , where the s christen him Anthony. Ten years later, the child is apprenticed to wealthy merchant John Bonnyfeather, his real grandfather, who discovers his relationship to the boy but keeps it a secret from him. He gives the boy the surname Adverse in acknowledgement of the difficult life he has led.

As an adult, Anthony falls in love with Angela Giuseppe, the cook's daughter, and the couple weds. Soon after the ceremony, Anthony departs for to save Bonnyfeather's fortune. The note Anthony leaves her is blown away and she doesn't follow after him. Instead, assuming he has abandoned her, she pursues a career as an singer. Anthony leaves for , where he becomes corrupted by his involvement with the . He is redeemed by his friendship with Brother François, and following the 's death he returns to to find Bonnyfeather has died and his housekeeper, Faith Paleologus (now married to Don Luis), will inherit the man's estate fortune unless Anthony goes to to claim his inheritance.

In Paris, Anthony is reunited with his friend, prominent banker Vincent Nolte, whom he saves from by giving him his fortune. Through the intercession of Debrulle, Anthony finds Angela and discovers she bore him a son. She fails to reveal she is Mlle. Georges, a famous opera star and the mistress of . When Anthony learns her secret, he departs for America with his son in search of a better life.

In his review in the "", Frank S. Nugent described the film as "a bulky, rambling and indecisive photoplay which has not merely taken liberties with the letter of the original but with its spirit . . . For all its sprawling length, [the novel] was cohesive and well rounded. Most of its picaresque quality has been lost in the screen version; its philosophy is vague, its characterization blurred and its story so loosely knit and episodic that its telling seems interminable." [ [http://movies.nytimes.com/movie/review?res=9906EFDF1F3FEE3BBC4F51DFBE66838D629EDE "New York Times" review] ]

The film was named one of the 's Top Ten pictures of the year and ranked eighth in the "" critics' poll [ [http://www.tcm.com/tcmdb/title/title.jsp?stid=1857&category=overview "Anthony Adverse" at Turner Classic Movies] ] .

Historian Bob Packett recommended this film in January 2008 for its scene in which a smaller vessel defeats a larger one through exploitation of the tactics of war at sea.