The cheroot or stogie is a cylindrical cigar with both ends clipped during manufacture. Since cheroots do not taper, they are inexpensive to roll mechanically, and their low cost makes them particularly popular. Typically, stogies have a length of 3.5 to 6.5 inches, and a ring gauge of 34 to 37. (Ring gauge is a measure of diameter, scaled in 64ths of an inch. A stogie is slightly over 1/2" in diameter.)

The term stogie is often misused to refer to any cigar with a foul stench, or as slang, to a cigarette. Many stogies are made of flavored tobaccos, and given that a stogie may last a half hour, as opposed to the 2–8 minutes that a cigarette typically lasts, there can be quite a pungent and pervasive aroma produced.

The word stogie is short for Conestoga. The cigar was the smoke of choice for teamsters driving Conestoga wagons in the cigar-making Conestoga valley area around Lancaster, Pennsylvania. The word cheroot comes from French cheroute, from Tamil curuttu/churuttu/shuruttu - roll of tobacco. This word could have been absorbed into the French language from Tamil during the 18th century, when the French were trying to stamp their presence in South India. The word could have then been absorbed into English from French.[1]

Mark Twain (Samuel Clemens) is shown smoking a stogie in many of his photographs. His beloved did not approve of this habit, and he made many jokes about this preference for inexpensive cigars. At one lecture, he indicated that he paid $5 a barrel for his cigars because he was incurably extravagant.

I know a good cigar better than you do, for I have had sixty years' experience. No, that is not what I mean; I mean I know a bad cigar better than anybody else. I judge by the price only; if it costs above 5 cents, I know it to be either foreign or half foreign and unsmokable. By me I have many boxes of Havana cigars, of all prices, from 20 cents apiece up to $1.66 apiece; I bought none of them; they were all presents; they are an accumulation of several years. I have never smoked one of them, and never shall. I work them off on the visitor. You shall have a chance when you come.

Modern day stogie fans include David Letterman, and filmmaker Francis Ford Coppola, who offers his own private-label stogies for sale at his winery.

Singer Roger Miller, who was known for enjoying smoking in general, included this line in his song, "King of the Road": "I smoke old stogies I have found / Short, but not too big around."

Thomas R. Marshall, Vice President under Woodrow Wilson (1913–21), was performing his duty of presiding over the U.S. Senate when Kansas Senator Joseph L. Bristow gave a long speech entitled "What This Country Needs." As Bristow expounded on a litany of the country's needs, the impatient vice president leaned over to his aide, and in a whisper that could be heard throughout the chamber, said, "What this country needs is a good five cent cigar."[citation needed] 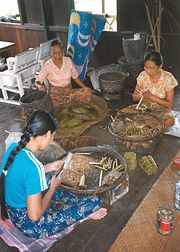 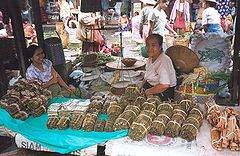 Cheroots sold in the market at Nyaungshwe, Burma.

Cheroots are traditional in Burma and India, consequently, popular among the British during the days of the British Empire. They are often associated with Burma in literature:

'Er petticoat was yaller an' 'er little cap was green,


An' 'er name was Supi-yaw-lat -- jes' the same as Theebaw's Queen,
An' I seed her first a-smokin' of a whackin' white cheroot,

An' a-wastin' Christian kisses on an 'eathen idol's foot:
—Rudyard Kipling,  (1892)[3] "On the Road to Mandalay," from Barrack-room Ballads

My brother was unlike us in some things, Sahib. He was fond of the sharab called 'Whisky' and of dogs; he drank smoke from the cheroot after the fashion of the Sahib-log and not from the hookah nor the bidi; he wore boots; he struck with the clenched fist when angered; and never did he squat down upon his heels nor sit cross-legged upon the ground. Yet he was true Pathan in many ways during his life, and he died as a Pathan should, concerning his honour (and a woman). Yea—and in his last fight, ere he was hanged, he killed more men with his long Khyber knife, single-handed against a mob, than ever did lone man before with cold steel in fair fight.
—Captain Percival Christopher Wren, I.A.R., 1912, Driftwood Spars

Apparently, Cheroot smoking was also associated with resistance against tropical disease in India. Verrier Elwin wrote in a foreword (1957) to Leaves from the Jungle: Life in a Gond Village,

A final thing strikes me as I re-read the pages of the Diary that follows is that I seem to have spent much of my time falling ill. I attribute this to the fact that in those days I was a non-smoker. Since I took to the cheroot, I have not had a single attack of malaria, and my health improved enormously in later years."
—Leaves from the Jungle: Life in a Gond Village, OUP 1992, p.xxix)

Most likely the cheroot's aroma, by sticking to the skin and hiding the scent of sweat, which draws mosquitoes, contributed to making the smoker less of a target for their bites.[citation needed]