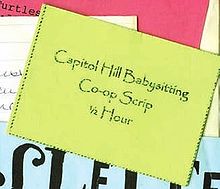 Scrip issued by the Capitol Hill Baby-Sitting Co-op, worth ½ hour of babysitting time.

Scrip is an American term for any substitute for currency which is not legal tender and is often a form of credit. Scrips were created as company payment of employees and also as a means of payment in times where regular money is unavailable, such as remote coal towns, military bases, ships on long voyages, or occupied countries in war time. Other forms of scrip include subway tokens, arcade tokens and tickets, and "points" on some websites.

Scrips have gained historical importance and become a subject of study in numismatics and exonumia due to their wide variety and recurring use. Scrip behaves similarly to a currency, and as such can be used to study monetary economics, as in the Capitol Hill Babysitting Co-op.

Company scrip was a credit against the accrued wages of employees. In the United States, where everything in a mining or logging camp was run, created and owned by a company, scrip provided the worker with credit when their wages had been depleted. These remote locations were cash poor. Workers had very little choice but to purchase meals and goods at a company store. In this way, the company could place enormous markups on goods in a company store, making workers completely dependent on the company, thus enforcing their "loyalty" to the company. While scrip was a de facto form of currency, employees were rarely paid in scrip.[citation needed] Additionally, while employees could exchange scrip for cash, it was rarely done at face value. Scrip in this context was valid only within that area or town where it was issued. While store owners in neighboring communities could accept the scrip as currency, they rarely provided a 1 for 1 exchange. This was to avoid the risk of having coins/currency that were worthless anywhere else.

When U.S. President Andrew Jackson issued his Specie Circular of 1836 due to credit shortages, Virginia Scrip was accepted as payments for federal lands.

During the Great Depression, many local governments were forced to pay employees in scrip at the height of the crisis.[2]

Scrip as a de facto form of currency within the setting of the mining or logging industry was discontinued around 1952.

Scrip is also related to the stock market where companies pay dividends in the form of scrip rather than paying actual currency.[citation needed] It is also a written document that acknowledges debt.

After World War I and the World War II, scrip was used in Germany and Austria; detailed accounts are in Notgeld.

During the Vietnam War, as well as earlier during the Korean War, U.S. soldiers were sent on leave with a scrip marked with expiration dates which could be spent at establishments cooperating in the program. This was done in part to encourage U.S. soldiers to seek their entertainment confined to these areas, but moreover was intended to deny Viet Cong "tax collectors" a prime source of revenue. The expiration dates on these scrips frequently led to a rush by soldiers on leave to spend currency, as well as for soldiers who had not spent their scrip on leave to exhange their scrip with other soldiers heading out to leave for fresher scrip or hard cash, often at an exchange rate that rather favored the outgoing soldiers.[citation needed]

Thought should also be given to chips. Commonly used as currency with which to gamble, the use of chips as company currency in the early 19th century in Devon, England in Wheal Friendship[3] copper mine gave its name to a local village: Chipshop.

The use of locally-issued scrip accepted by multiple businesses within a community has increased during the Late-2000s recession. Community-wide scrip usage has begun or is on the rise in Ithaca, New York; Detroit; The Berkshires; Pittsboro, North Carolina; Traverse City, Michigan; Lamar, Colorado; Calgary, Canada and Hagen, Germany.[4][5][6][7]

Thailand's township Amphoe Kut Chum once issued its own local scrip called Bia Kut Chum: Bia is Thai for cowry shell, which was once used as small change, and still so used in metaphorical expressions. To side-step implications that the community intended their scrip as an unlawful substitute for currency, it now issues exchange coupons called Boon Kut Chum.[8]

Some companies still issue scrip notes and token coin, good for use at company points of sale. Among these are the Canadian Tire money for the Canadian Tire stores and gasbars in Canada, and the Disney dollars, used at Disney resorts.

Scrip is now issued in the form of gift certificates (alternatively gift vouchers), or gift cards. The two are essentially the same except that the cards automate the checkout and accounting processes. Cards usually have a barcode or magnetic strip, which can be processed through a standard electronic credit card machine.

Gifts cards are increasingly being offered as consumer incentives at no cost or for a substantial discount. For example, reward points given for the use of credit cards can be exchanged for a variety of gift cards and some companies will offer high value gift cards at a discount. Gift cards are readily available at a discount using online trading services.[citation needed]

There are websites where users can trade, donate, buy and sell gift cards. Sellers use these websites because the gift card is not to a store of their liking, and buyers because this provides opportunities to buy these cards for less than they are nominally worth at the business. There are other websites that sell a collection of third party gift cards; businesses offer credits to these websites for employee incentives, usually in return for a discount; however discounts for consumers are rarely offered.[citation needed]

Many online games (MMORPGs) provide a type of virtual currency that can only be earned within the game and/or be purchased with real legal tender from outside the game. Typically this currency cannot be exchanged for real legal tender after it has been acquired, but there are exceptions. Some games are free, but sometimes players are required to pay for additional items or gaming options, which can be traded among the gaming community and used as currency or traded back for real money. The ability to exchange real money for virtual currency or scrip and then back into real money raises a great many new issues, some of which parallel traditional issues with scrip and some of which are new.

While other online games may not provide scrip in the form of virtual currency or may not redeem it for real legal tender, an active market in trading virtual assets acquired in-game may still exist outside the game. In some cases, this may involve payments in real legal tender (e.g., trading of in-game assets on eBay). This, too, can be considered a modern form of scrip.

Bitcoins are a virtual currency that exist independent of any central authority.

The amount of trade in these forms of online scrip can be very substantial, although the very nature of scrip strongly constrains its influence to the environment in which it was issued. Nevertheless, as the amount of trade grows and its value in real-world currency increases, many new and unexplored economic, legal, and policy questions arise.

Unless the gift card is obtained at a discount (paying less than the actual value of the card), some point out that trading real money for scrip is unproductive as it then ties up that money until it is used, and usually it may only be used at one store. Furthermore, not all gift cards issued are redeemed. In 2006, the value of unredeemed gift cards has been estimated at almost US$8 billion.[9]

VISA, MasterCard and American Express gift cards[10] are initially funded by a credit card or bank account, after which the funding account and gift card are not connected to one another. Therefore, once the predetermined funds are consumed, the card number expires. Gift card holders are thus able to make riskier Internet purchases, without the fear of having to persuade a merchant to stop pulling funds from them. VISA and MasterCard also have re-loadable debit cards.

One disadvantage of gift scrip is that some gift card providers charge "maintenance fees" on the cards, particularly if they are not used after a certain period of time, or the card will expire after a given period of time.[11] Some provinces and states in North America (e.g. California, Ontario, Massachusetts, Ohio, Washington) have enacted laws to eliminate non-use fees or expirations,[12] but because the laws often only apply to single-merchant cards[13] buyers have to review the gift card conditions prior to purchase to determine exact restrictions and fees.[14] Additionally, if a retailer goes bankrupt, gift cards can suddenly become worthless. Even if stores do not close immediately, the company may stop accepting the cards.[15] This became a significant issue during the Global financial crisis of 2008–2009, prompting the Consumers Union to call upon the Federal Trade Commission to regulate the issue.[16]

Military personnel deployed abroad (protective or occupation) are generally paid in military scrip, which prevents legal tender from going into the black market, plus it is an excellent way of keeping tabs on military payments and spending. For US Forces following WWII this was called MPC Military Payment Certificate. This type of scrip can be exchanged through the military for legal tender upon return to the home nation. Military occupying powers have also been known to issue occupation scrip for local civilian use as a means of controlling the local economies.

Similarly, amongst British troops occupying Germany immediately following the Second World War, plastic coins (longer lasting than paper notes) were issued as part of their wage. These were only tendable at the equivalent of the Post Exchange, to purchase replacement kit.

In Australia, the term "scrip bid" is used to describe a takeover offer where shares are offered partly or wholly in place of cash. By receiving shares instead of cash the realisation of the capital asset can be delayed to take better advantage of capital loss offsets. Additionally, tax payers are only taxed on half the capital gains tax if they hold the asset for more than 12 months.