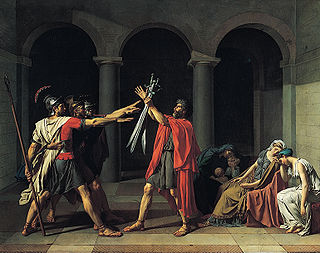 Oath of the Horatii (1784), by Jacques-Louis David

In the battle, the three Curiatii were wounded, but two of the Horatii were killed. The last of the Horatii, Publius, turned as if to flee. The Curiatii chased him but, as a result of their wounds, became separated. This enabled Horatius to slay them one by one.

When the victorious Horatius returned carrying the spoils of victory, his sister cried out in grief because she realized the Curiatius to whom she had been engaged was dead. Then Horatius killed his sister, proclaiming, "So perish any Roman woman who mourns the enemy." For the murder, he was condemned to death but, upon the advice of a certain jurist named Tullus, Horatius appealed to the assembly of the people. Horatius' father, also called Publius, spoke to the people of his son's recent victory, and entreated them not to render him childless since he had, until recently, had four children. Persuaded by his father's arguments, the people acquitted Horatius. The legend might have been the reason for the condemned in Rome to be able to appeal to the populace. His father was required to expiate the crime by offering sacrifices, which were thereafter continued by the gens Horatia, and the son was required to pass under a beam laid across the street, as if a yoke, which remained in the city and became known as Sororium Tigillum, the "sister's gibbet".

The spoils of the Curiatii were hung in a place that became known as Pila Horatia.

The tale of the Horatii was much-discussed and portrayed from the Renaissance onwards, particularly in Italy and France. Niccolò Machiavelli recounted it in his 1531 Discourses on Livy, and presents both a criticism of the Romans and Alba Longans (that they would allow the fate of a war come down to single combat) and also a commendation of the Romans' willingness to pass a sentence of death upon one who had so recently saved the city. In April 1578 the battle was re-enacted, in earnest, between supporters of Henry III of France and Henry I, Duke of Guise — four of the six combatants died. David's key 1784 "Oath of the Horatii" portrays an event from this story, continuing French interest in it that had also produced Pierre Corneille's 1640 stage play Horace. In 1801 Napoleon even dubbed the French naval captain Amable Troude "the French Horatius" for his conduct whilst being pursued by a British squadron after the Battle of Algeciras. Commanding the 80-gun Formidable, Troude chose to let his quickest opponent, the 74-gun HMS Venerable, catch him up; Venerable ended up so badly battered that the rest of the British had to abandon the chase to save her, allowing the Formidable to escape.

The story has frequently been musically and theatrically represented. Corneille's Horace has provided the basis for the libretti of two operas, Antonio Salieri's 1786 Les Horaces, and Domenico Cimarosa's 1797 Gli Orazi e i Curiazi. During the 1840s the story was mentioned in the Irish rebel song A Nation Once Again and again adapted as an opera, this time as Orazi e Curiazi by Saverio Mercadante. The story is used as the scenario of the orchestral work Horace Victorieux by Arthur Honegger, composed in 1920 and described as a 'mimed symphony' (symphonie mimée d'après Tite-Live) though it was originally conceived as a ballet. Also in the twentieth century, Bertholt Brecht wrote The Horatians and the Curiatians based on the story, followed by Heiner Müller's The Horatian, which was later transformed by Heiner Goebbels into a three-movement song that re-tells the myth; in the third movement, the Horatian is crowned with the laurel for his merits and simultaneously executed for his guilt.

In the 1945 French film, Les Enfants du Paradis, the stage manager refers to his demanding audiences as "Horatii and Curiatii". The brothers are also referenced in Luchino Visconti's 1954 Senso. Patrick Larkin's novel The Lazarus Vendetta involves 'the Horatii', employed by Lazarus and with identical appearance, strength and agility resulting from years of painstaking surgery, physical conditioning and training (though in this version of the Horatii they are not birth brothers). The 1961 film Duel of Champions is an adaptation of the story of the Horatii.