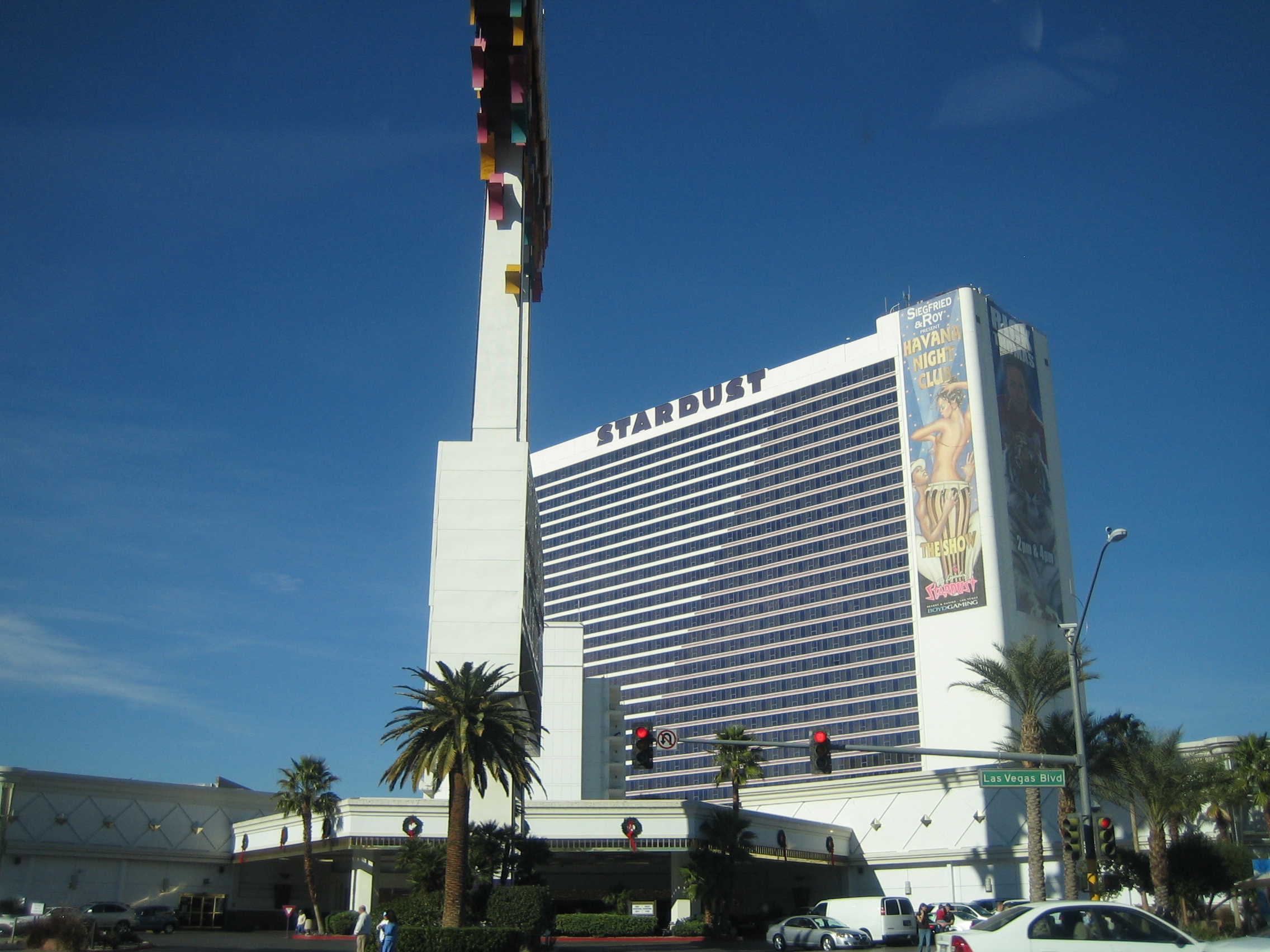 The Stardust Resort & Casino was a casino resort located on 63 acres along the famed in .

Most of the casino complex (including the main 32-story tower) was built in 1991, and its , demolition marked the youngest undamaged high-rise building to ever be demolished.

The resort was conceived and built by , who died in 1955 before construction was completed. When the hotel opened, it had the largest casino in Nevada, the largest swimming pool in Nevada and the largest hotel in the Las Vegas area.

The Stardust opened at 12:00 noon on , . The attendees of the opening included governors, senators, city and county officials and Hollywood celebrities.

The entertainment registry started with the spectacular French . Lido was conceived by Pierre-Louis Guerin and Rene Fraday, and staged by .

The opening night lounge lineup offered, from dusk to dawn, , The Happy Jesters, The Vera Cruz Boys and the Jack Martin Quartet. Daniels became the first entertainer to sign a long-term residency contract in Metropolitan Las Vegas when he agreed to appear for 40 weeks per year for three years.

The famed Stardust sign also became a symbol of Las Vegas. was hired to fabricate the sign. Kermit Wayne's design was selected for both the façade and the roadside signs. Although Dalitz said it was from his original plans, the sign was really part of Cornero's original concept.

The Stardust sign gave visitors a panoramic view of the solar system. At the sign's center sat a convert|16|ft|m|sing=on diameter plastic model of the Earth, taken from the . Cosmic rays of neon and electric light bulbs beamed from behind the model earth in all direction. Three-dimensional planets spun alongside 20 scintillating neon starbursts. Across the universe was a jagged galaxy of electric lettering spelling out "Stardust". The sign utilized convert|7100|ft|m of neon tubing with over 11,000 bulbs along its convert|216|ft|m|sing=on front. The "S" alone contained 975 lamps. At night the neon constellation was reportedly visible convert|60|mi|km away.

The roadside sign was freestanding with a circle constraining an amorphous cloud of cosmic dust circled by an orbit ring and covered in dancing stars. The hotel's name was nestled in a galactic cloud.

The Stardust also conveniently held Las Vegas Strip's only first run a in the rear of the resort.

The Stardust took over the closed Royal Nevada hotel-casino, remodeled the showroom, and converted it into a convention center and high-roller suite. From 1959 to 1964, this wing was occupied by the Stardust's "high roller" guests and The Stardust showgirls.

This Olympic size pool area was opened to the general public with the 1964 addition of the 9 story Stardust Tower that replaced half of the bungalow rooms.

In 1960, the resort added a new convert|4800|sqft|m2|sing=on screen surface to its drive-in theatre. The same year, the Aku Aku Polynesian Restaurant was opened, complete with a Tiki Bar, and a large stone Tiki head marking the entrance from the outside.

By 1961, Stardust's management included Credit Manager , a career criminal with seven known aliases, fourteen criminal convictions including an assault conviction, and a three year prison sentence for income tax evasion. Casino Manager and 5% owner , was a veteran associate of and was once fined for running a crooked dice game at an Elks convention, and general manager had served three years for tax evasion.

In 1964, with the addition of the nine-story tower (later called the East Tower), the room count increased to 1,470. For the next 5 years The Stardust was the leader in rooms until 1969 when The International opened. In 1964 the landmark façade was updated, expanding out into the parking lot by the highway. The new façade raised the Stardust's name, still in electra-jag letters, onto a pole above the exploding universe.

In 1965, the old circular sign was replaced by a new $500,000 roadside sign. The new sign's form was blurred by a scatter of star shapes, a shower of stardust. At night, incorporating neon and incandescent bulbs in the animation sequence, light fell from the stars, sprinkling from the top of the convert|188|ft|m|sing=on tall sign down over the Stardust name.

In 1966, attempted to buy the Stardust for $30.5 million but was thwarted by government officials on the grounds that his acquisition of any more gambling resorts might violate the .

In November 1969, purchased the Stardust for an undisclosed amount.

In 1977, the Stardust went through another remodeling. The bombastic galactic theme was abandoned, though the roadside sign remained, and the façade was covered with animated neon tubing and trimmed with mirrored finish facets. The new porte cochere sparkled with 1,000 small incandescent bulbs. The encrustation of bulbs turned solid mass into ethereal form.

In 1980, the Aku Aku Polynesian Restaurant closed. The giant stone Tiki head that marked the entrance was later moved to an island in an artificial lake at in Winchester, Nevada.

In 1984, the levied a $3 million fine against the resort for skimming, the highest fine ever issued by the commission. Suspicions, accusations and controversy about the Stardust's hidden ownership over the years was finally squelched when 's locally-based, squeaky-clean gaming company purchased the Stardust in March 1985.

In 1991, a 32-story West Tower was added to the resort, overshadowing the older East Tower and bringing the total room count to 1,500. Two landscaped swimming pools, a golf course, and athletic facilities were also built. The renovation project totaled $300 million. That same year, the Stardust sign's Jetsonian lettering was replaced with a subdued Futura typeface. Take into consideration the fact that the bungalow rooms had been demolished by now and is the reason that the room count stayed at 1,500. At its peak size, the Stardust contained convert|100000|sqft|m2 of gambling casino including 73 gaming tables, and 1,950 slot, keno and video poker machines. The conference center was convert|25000|sqft|m2 and could accommodate meetings and banquets for groups of 25 to 2,000.

got their Strip start at the Stardust with the help of mob associate after he gave them 's Rolls Royce.

signed a ten-year deal with the Stardust in 1999, for a reported $25 million per year, the largest entertainment contract in the Las Vegas region at the time. After five and half years, Newton ended his run in late April 2005, and moved into his theater. Magician premiered at the hotel on , .

In 2002, comedian had a regular show at the Stardust.

During the Stardust Theater's last month of operation, legendary stars including George Carlin, and gave performances. The last act to perform in The Stardust Theater was and ; the theatre formally closed on , .

The Royal Nevada was the previous hotel on part of the Stardust site.

The Royal Nevada opened north of the New Frontier on , , as the "Showplace of Showtown, U.S.A." The resort's crowning glory was the crown which sat on top of the resort.

The night before the opening, 'atomic soldiers' were treated to a pre-opening party.

The Royal Nevada was plagued with financial problems from the start.

While this resort seemed to "disappear completely", swallowed in 1959 by the Stardust becoming the Stardust's Convention Center, portions of the two story bungalow style Royal Nevada wing and pool remained in use up until 2006.

The Stardust closed its doors to the public forever on , . [ [http://www.reviewjournal.com/lvrj_home/2007/Mar-13-Tue-2007/news/13129831.html "Lights out for Strip icon", Las Vegas Review-Journal, , ] ] The last dice throw at a Stardust craps table was by tourist Jimmy Kumihiro of . [http://www.lasvegassun.com/sunbin/stories/sun/2006/nov/02/c00008981.html?Jimmy%20Kumihiro] Slot machine betting was officially halted at 7:30 a.m. Just before the casino was officially closed at 12 Noon, the Bobbie Howard Band led the customers out the doors for the last time (in a ) to the tune of "", and the hotel/casino complex closed forever after a 48 year run of continuous 24 hour operation. Outside, the loudspeakers were playing the song "", which contains the line "Nobody told me there'd be days like these / Strange days indeed". [ [http://www.lasvegassun.com/sunbin/stories/sun/2006/nov/02/566637116.html?Stardust%20Casino "John Katsilometes sidles up to Bill Boyd on the morning he closes the door on the legendary Stardust amid a festive atmosphere", Las Vegas Sun, , ] ]

At the time of its closing, The Stardust Showroom starred The Magic of Rick Thomas, the most successful daytime show in the Strip's history.

On Tuesday , at 2:33 a.m. (), the Stardust Resort was imploded in a grand ceremony which included fireworks prior to the East and West Towers' tumble.

See this [http://www.metacafe.com/watch/474724/stardust_demolition/ video] of the demolition. There is another video [http://www.youtube.com/watch?v=rWCVIlktX-k here] which includes the implosion in reverse and in slow motion.

It can be seen in the movie "" where it is damaged by the Martians.

The large neon sign can be seen in several scenes in the movie "Fear and Loathing in Las Vegas".

The book Casino: Love and Honor in Las Vegas written by and Larry Shandling and the movie "Casino" based on Pileggi's and Shandling's book chronicles the days when The Stardust Casino - and two other casinos from the area - were run by Frank 'Lefty' Rosenthal and Anthony 'The Ant' Spilotro on behalf of the Chicago and Kansas City during the 1960s and 1970s.

Rosenthal was eventually denied a and placed in the 's "black book" and Spilotro and his brother were found dead, buried half naked in a corn field in .

In the film portrayed the head of The Stardust, in the person of Sam 'Ace' Rothstein, a composite of Rosenthal's personality. portrayed Nicky Santoro, a composite of Spilotro's personality. The name of the casino was changed to "Tangiers" and was shown being across the street from the Dunes, several blocks away from the site of The Stardust. However, snippets of the song "Stardust" can be heard on the soundtrack, giving a subtle hint as to the casino's true identity.

The book "The Odds: One Season, Three Gamblers and the Death of Their Las Vegas", by Chad Millman, chronicled a year in the lives of Stardust race & sports book manager Joe Lupo and assistant manager Bob Scucci, as well as professional sports bettor Alan Boston and wannabe sports bettor Rodney Bosnich. The Stardust was chosen due to its status at the time as the "home of the opening line."

The camp classic movie "" was partly filmed on location and set in The Stardust Resort and Casino. The films revolves around the battles to be the top Stardust showgirl.

The Vince Vaughn film "Swingers" had scenes set and filmed at The Stardust Resort and Casino.

In 1994, the movie "" was filmed at the Stardust Resort and Casino.