Artist's rendition of the docking of Orion to the ISS 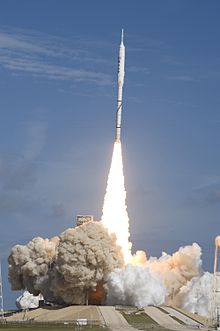 As of early 2009, crewed flights for NASA Project Constellation missions were planned to begin around 2014; an independent assessment by the Augustine Commission estimated that this would not occur until 2017-2019. The first launch of the suborbital Ares I-X launch system was in October, 2009, with a second test launch scheduled for 2012. However, on February 1, 2010, President Obama announced a proposal to cancel the Constellation program and effectively end the U.S. manned space program effective with the U.S. 2011 fiscal year budget.

Tests of the Launch Abort System were conducted in 2010.

The test flight of Ares V was planned for 2018, with lunar return flights beginning in 2019; the Augustine Commission estimated this would not actually occur until the late 2020s.

In October 2006 NASA released a draft schedule of all planned NASA Project Constellation missions through 2019.[1][2] This document included descriptions of a series of proposed vehicle test missions. In July 2007 the schedule was reviewed.[3] In January 2008 the schedule was again reviewed.[4][5] The most recent published set of milestones is from February 2009.[6] Also, an independent assessment by the Review of United States Human Space Flight Plans Committee in October 2009 found that under NASA's current plans and budget the Ares I would not be ready to launch until 2017-2019, with the Ares V not available until the late 2020s.

Proposed schedule as of October 2009[update]

These will be conducted using the Orion Abort Test Booster (ATB), similar to the Little Joe II used for Apollo testing. A boilerplate Orion capsule[9] and the escape tower will be tested on these missions.

These will test the launch escape system of the Orion spacecraft on the launchpad.[3]