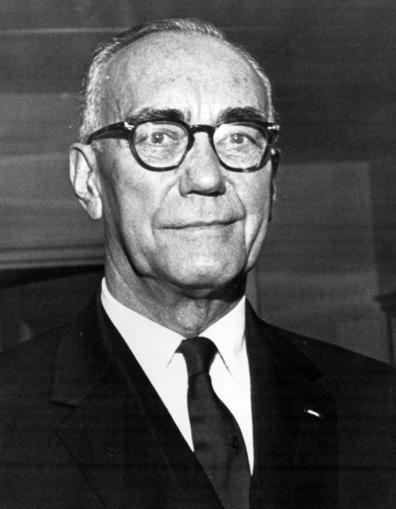 Draper was born in , and received a B.A. and M.A. in economics at .

He joined the soon after finishing college and served during as a major in the infantry. After the war he stayed in the Army Reserves working his way up to chief of staff of the 77th Division (1936–1940), while going to work in New York City for National City Bank (1919–1921), Bankers Trust Company (1923&ndash;1927), and then (1927–1953). In 1937, he was made a vice president of Dillon Read, an investment bank that had underwritten millions of dollars of German industrial bonds in the United States between the world wars.

A supporter of , Draper sponsored the third "" was held in New York's American Museum of Natural History under the supervision of the International Federation of Eugenics Societies. [ [http://www.spiritone.com/~gdy52150/betraylp9.htm A Pledge Betrayed: John McCloy ] ]

At the invitation of , he moved to to serve on the President's Advisory Committee for , and was promoted to colonel (, ).

At the start of he took command of the 136th Infantry, 33rd Division, National Guard (1942–1944). At the end of the war, he was promoted to brigadier-general ( ) and was posted to Berlin to serve as chief of the Economics Division, for Germany (1945–1947). He opposed the , which was designed to prevent a resurgence of German economic and military power, and strongly supported measures to expedite Germany's economic recovery, even if that meant leaving former Nazi supporters in high positions in industry. [ [http://www.amazon.com/gp/product/B0000EEKBR/ All Honorable Men: James Stewart Martin; Little, Brown, and Co. (1950).] ]

After a promotion to major-general, Draper was asked by the new Secretary of War Kenneth C. Royall to become his (, ). With the transition of the Department of War to the Department of the Army, Draper became the first (, — , )

After retiring from public service a second time, he traveled to to serve as chairman of the (1954&ndash;1959).

In 1967 he retired from Draper Gaither, moved to Washington, D.C. and joined in New York as chairman, retiring a few years later to become the U.S. delegate to the United Nations Population Commission (1969&ndash;1971). He also co-founded the Population Crisis Committee in 1965 and chaired the .