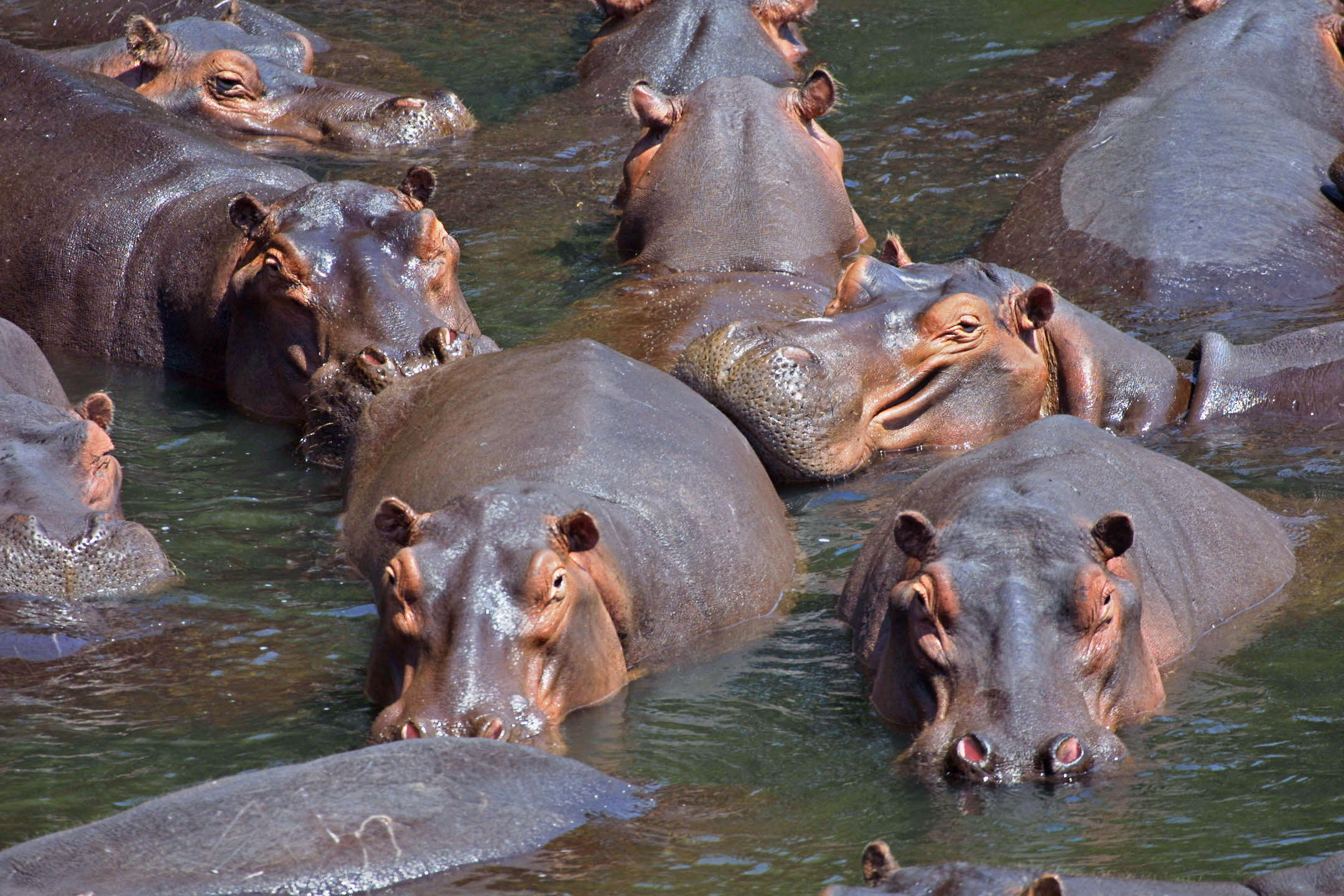 Hippopotamuses (colloquially also "Hippopotami") are the members of the family Hippopotamidae. They are the only extant artiodactyls which walk on four toes on each foot.

Hippopotamids are large mammals, with short, stumpy legs, and barrel-shaped bodies. They have large heads, with broad mouths, and nostrils placed at the top of the snout. Like pigs, they have four toes, but unlike pigs, all of the toes are used in walking. Hippopotamids are , although, unlike most other such animals, they have no hooves, instead using a pad of tough connective tissue. Their stomach has three chambers, but they are not true s.

The living species are both smooth-skinned, and lack both s and s. The outer epidermis is relatively thin, so that hippos dehydrate rapidly in dry environments.

Both the s and canines are large and tusk-like, although the canine tusks are by far the largest. The tusks grow throughout life. The postcanine teeth are large and complex, suited for chewing the plant matter that composes their diet. The number of incisors varies even within the same species, but the general dental formula is:dentition2|2-3.1.4.3|1-3.1.4.3

The hippopotamids are descended from the s, a family of semi-aquatic artiodactyls that appeared sometime during the late , and are popularly thought to have resembled small- or narrow-headed hippos. More specifically, the hippos split off from the anthracotheres some time during the . After the appearance of the true hippopotamids, the anthracotheres went into a decline brought about by a combination of climatic change and competition with their descendants, until the last genus, "", died out in the early of Africa.

There were once many species of hippopotamid, but only two survive today: "Hippopotamus amphibius", and "Choeropsis liberiensis". They are the last survivors of two major ary lineages, the hippos proper and the pygmy hippos, respectively; these lineages could arguably be considered but their relationships to each other - apart from being fairly distant relatives - are not well resolved.

The enigmatic "" is insufficiently known to be assigned a place in the hippo with any degree of certainty. In addition, the "", in a sense now restricted to an extinct group of animals once living around the northern and northeastern , which formerly included most ancient hippos, turned out to be .

The systematics and used here mostly follows the review of Boisserie (2005) [Boisserie identifies the species "Hippopotamus minor" as "Phanourios minutus", but this genus is not widely recognized.] .