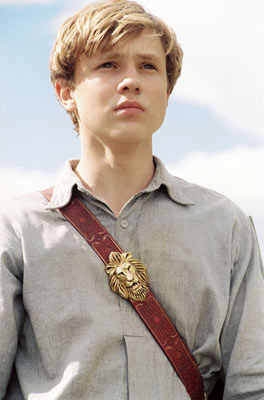 In 's live-action films, ' and ', Peter is portrayed by English actor William Moseley. Actor portrays an older Peter at the end of the first film.

Peter is the eldest of the four Pevensie children and shares his adventures in Narnia with his sisters Susan and Lucy and with his brother Edmund. As the High King of Narnia, Peter has authority over all other Kings and Queens the country will ever have.

Peter shares some similarities with (see Christian elements below) and that may contribute to Lewis' choice for his name. An early draft of "The Lion" begins, "This book is about four children whose names were Ann, Martin, Rose, and Peter. But it is most about Peter who was the youngest." Peter is the only name that makes it into the final work, but as the oldest child instead of the youngest. Harvard citation|Hooper|1977|pp=105-6

, on the southeast coast of England, is the site of a medieval castle that figures importantly in British history at several points. In Rudyard Kipling's "Puck of Pook's Hill" (1907) at least one of the characters refers to Pevensey as "England's Gate", which the celebrated wardrobe in Lewis's books quite literally becomes. The surname "Pevensie" does not actually appear in the Chronicles until the third published book, "The Voyage of the "Dawn Treader

Peter was born in 1927 and is 13 years old when he appears in "The Lion, the Witch and the Wardrobe". As a monarch of Narnia's Golden Age, he rules with his brother and sisters for fifteen years, reaching the approximate age of 28 before returning to his youth in England at the end of "Wardrobe". By "The Last Battle" he is a 22 year old university student with his heart still in Narnia.

In "The Lion, the Witch, and the Wardrobe"

As the eldest brother, he tries his best to protect his other siblings and to act like a responsible young adult. He is evacuated to the countryside with his siblings by train because of the air-raids of World War II. In the countryside, they stay at the old mansion of Professor until the end of the war.

Peter received his sword, Rhindon, and shield from Father Christmas during the journey to find Aslan and is later knighted "Sir Peter Wolf's-Bane" Harvard citation|Lewis|1950|pp=121 by Aslan after he kills the wolf, chief of the 's secret police, who was trying to kill Susan. This is Peter's first battle. In the American editions of the books on which the 1979 was based, Lewis changed the chief wolf's name to Fenris-Ulf, after a figure from . In those versions, Peter is given the epithet "Fenris-bane".He is the head General of Aslan's army. After the defeat of the White Witch Jadis, self-styled Queen of Narnia, and her evil allies, in the , he is crowned by Aslan as His Majesty King Peter, High King of Narnia, Emperor of the Lone Islands, Lord of , Knight of the Most Noble Order of the Lion. He is also called "High King Peter the Magnificent". The ancient prophecy of two Sons of Adam and two Daughters of Eve coming to sit on the four thrones of Narnia at Cair Paravel has come to fruition. This marks the end of the hundred years of winter and the reign of the White Witch, and is the beginning of Narnia's Golden Age.

After the Pevensies arrive in the ruins of Cair Paravel, they find the castle's treasure chamber, where Peter, Susan and Lucy find the gifts they were given by Father Christmas. Peter takes his sword, Rhindon, and his silver shield, and again serves as the leader of the group. When the children are forced to make a decision, Peter, as High King, has the final word. Buying time for Aslan to awaken the other Narnians and stall the war, Caspian suggested that Peter would fight Miraz in a one on one duel. After the Pevensie children help defeat the Telmarines, Peter formally gives authority to Caspian to rule Narnia as king. Aslan gives Caspian the authority to rule "under Us and under the High King". Peter later confided to Lucy and Edmund that he was told by Aslan that he and Susan will never return to Narnia, as they are now too old. The four children returned to their world, in which they were waiting for their train that will take them to their boarding schools.

In "Voyage of the Dawn Treader"

While not physically present in the book, it was mentioned that Peter was under the tutelage of Professor Kirke in preparation for exams.

In "The Last Battle"

Peter has a minor role in the story, however he was the only one to directly address Tirian when the young king begged them to come to his aid.

Peter and Edmund went to London to retrieve the magic rings that Professor Kirke buried in "The Magician's Nephew" in the Ketterley's yard dressed as workmen, hoping to use its power and allow Eustace and Jill to reach Narnia. Both were waiting for Lucy, Eustace, Jill, Digory, and Polly at the station platform when the train crashed and killed them and everyone else, transporting them to Narnia.

Peter is described by Tirian as having the face of a king and a warrior. After Tirian passed through the stable door and saw Tash for the first time, Peter calmly ordered the demon to leave with his prey. As Aslan brought about the final destruction of Narnia, Peter was asked by Aslan to close the door, which he then locked with a golden key, and was one of the many people admitted in Aslan's country.

Lewis, himself an expert on allegory, did not consider "The Chronicles of Narnia" allegory. He saw them as "suppositional" answering the question, "What might Christ become like, if there really were a world like Narnia and He chose to be incarnate and die and rise again in that world as He actually has done in ours?' This is not allegory at all." Harvard citation|Martindale|Root|1990|pp= While not allegorical, Narnia does present significant parallels with elements from .

*In 's "The Chronicles of Narnia" films, Peter is portrayed by British actor William Moseley as a child; and as an adult in the end of the first film.
*In the 1988 produced by the , "The Lion, the Witch and the Wardrobe", Peter was played by actor .
*In the late-1990s/early-2000s radio adaptations produced by , he is voiced as a child by Freddie Findlay and by Peter Moreton as an adult.
* In the spoof "", Peter is played by Adam Campbell.