Not to be confused with the same-name Scottish company that published science fiction magazines from at least 1946 to 1960.

Magazine Enterprises was an American comic book company lasting from 1943 to 1958, which published primarily Western, humor, crime, adventure, and children's comics, with virtually no superheroes. It was founded by Vin Sullivan, an editor at Columbia Comics and before that the editor at National Allied Publications (the future DC Comics) who had bought Superman from creators Jerry Siegel and Joe Shuster, and edited the character's earliest stories. 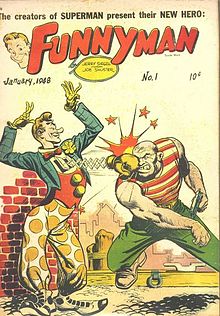 In late 1947, Superman creators Jerry Siegel and Joe Shuster collaborated once again with editor Vin Sullivan, who had discovered their superhero character in the National Allied Publications' submissions file. The duo had decamped to Magazine Enterprises after leaving National Allied (by then called National Comics) and suing to regain the rights to Superman and their later creation, Superboy. Siegel and Shuster brought most of their studio's artists with them, except for 1950s Superman penciler Wayne Boring, and created the new character Funnyman, a slapstick-comedian hero. Both as a comic book and as a comic strip, however, the character failed to find an audience.[1]

Among the company's publications were licensed film and TV comics featuring comedian Jimmy Durante; suave actor Dick Powell; and the CBS television series The Adventures of Robin Hood, starring Richard Greene. Additionally, Little Miss Sunbeam Comics starred the blond, pig-tailed mascot of Sunbeam Bread. The company's two superhero characters were the Avenger, created by writer Gardner Fox and artist Dick Ayers in The Avenger #1 (March 1955), with Bob Powell drawing the character's three subsequent issues and all four covers; and the aptly named Strong Man, an unmasked, super-strong hero in a jungle-print circus strongman outfit. The Avenger was one of the very few traditional, costumed superheroes created during the period before superheroes' revival in what historians and fans call the Silver Age of Comics, beginning 1956.

Since the copyright to Magazine Enterprises' comics do not appear to have been renewed,[2] they fell into the public domain in accordance with copyright laws at the time. Beginning in the 1980s, AC Comics has issued reprint titles of Magazine Enterprises material, along with those of other defunct publishers of that era.[3] As well, AC revived the Avenger as a guest star in FemForce #19 (1989; no cover date), then creating a new series. Ghost Rider reprints appeared in 1999 with the character renamed the Haunted Horseman.