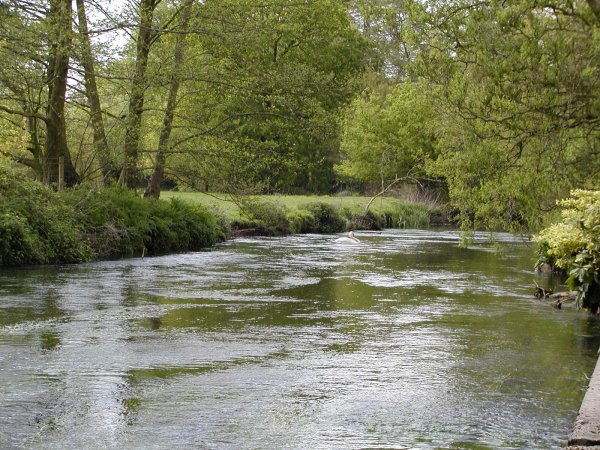 
map_size =
map_caption =The River Blackwater is a tributary of the in England and, indirectly, of the . It rises at on the outskirts of between Aldershot in and in and runs northwards to join the Loddon near the village of in . Along part of its length, the river forms the boundary between and , and then between and . It rises in Rowhill Nature Reserve, Aldershot Rowhill, an isolated remnant of the extensive that once surrounded Farnborough and Aldershot. The remaining heathland is used by the for training exercises. After 20 miles the Blackwater is joined by the River Whitewater near Eversley. The river gives its name to the small town of , upon the river near .

The River Blackwater runs down the centre of the Blackwater Valley, which is maintained as an open space along the borders of the counties of Berkshire, Hampshire and Surrey. It runs for approximately 30 km, from the source of the River Blackwater at Rowhill Nature Reserve near Aldershot in the south, northwards to Swallowfield where the river joins the River Whitewater and then the Loddon. The Loddon eventually flows into the River Thames near Reading.

Although surrounded by urban development the Valley provides an important green corridor for local residents. As well as the Blackwater Valley Site of Special Scientific Interest (SSSI) and a small part of the Basingstoke Canal SSSI, three nature reserves within the Valley catchment and many other areas have been recognised for their ecological importance. The local planning authorities covering the Valley have designated 31 other areas as ‘Wildlife Sites’. As a result of an improvement programme, wildlife is returning, including the Otter which has been absent for over 40 years, fishing stocks are improving and the construction of the long distance riverside path has opened up much of the riverbank.

A cycle route runs alongside the River Blackwater for most of its length. There is a running club named [http://www.bvrunners.org Blackwater Valley Runners] who run there regularly.

The runs east west from the Greywell Tunnel at to the . It crosses the Blackwater Valley on an embankment. The River Blackwater used to flow under the embankment in a culvert. Following the construction of the relief road, the Basingstoke Canal now crosses the River Blackwater via the spectacular Ash . s that used to roost in the culvert now live in a purpose-built bat house on a nearby island. The new aqueduct affords views of the surrounding countryside. In the distance to the south is the . This is where the narrows. It runs between Farnham and . Guildford lies in a gap in the North Downs, cut by the River Wey. The , a small local brewery, lies just off the Hog's Back.