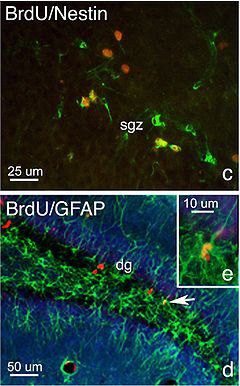 BrdU (red), a marker of DNA replication, highlights neurogenesis in the subgranular zone of hippocampal dentate gyrus. Fragment of an illustration from Faiz et al., 2005.[1]

Neurogenesis (birth of neurons) is the process by which neurons are generated from neural stem and progenitor cells. Most active during pre-natal development, neurogenesis is responsible for populating the growing brain with neurons. Recently neurogenesis was shown to continue in several small parts of the brain of mammals: the hippocampus and the subventricular zone. Studies have indicated that hormones, such as testosterone in vertebrates and ecdysone in invertebrates, have an influence on the rate of neurogenesis. 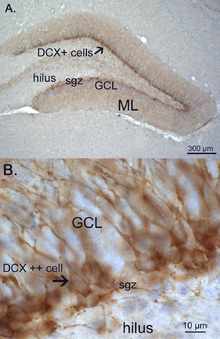 New neurons are continually born throughout adulthood in predominantly two regions of the brain:

Many of the newborn cells die shortly after they are born, but a number of them become functionally integrated into the surrounding brain tissue.

Adult neurogenesis is an example of a long-held scientific theory being overturned. Early neuroanatomists, including Santiago Ramon y Cajal, considered the nervous system fixed and incapable of regeneration. The first evidence of adult mammalian neurogenesis in the cerebral cortex was presented by Joseph Altman in 1962,[3] followed by a demonstration of adult neurogenesis in the dentate gyrus of the hippocampus in 1963.[4] In 1969, Joseph Altman discovered and named the rostral migratory stream as the source of adult generated granule cell neurons in the olfactory bulb.[5] Up until the 1980s, the scientific community ignored these findings despite use of the most direct method of demonstrating cell proliferation in the early studies, i. e. 3H-thymidine autoradiography. By that time, Shirley Bayer [6][7] (and Michael Kaplan) again showed that adult neurogenesis exists in mammals (rats), and Nottebohm showed the same phenomenon in birds[8] sparking renewed interest in the topic. Studies in the 1990s[9][10] finally put research on adult neurogenesis into a mainstream pursuit. Also in the early 1990s hippocampal neurogenesis was demonstrated in non-human primates and humans.[11][12] More recently, neurogenesis in the cerebellum of adult rabbits has also been characterized.[13] Further, some authors (particularly Elizabeth Gould) have suggested that adult neurogenesis may also occur in regions within the brain not generally associated with neurogenesis including the neocortex.[14][15][16] However, others[17] have questioned the scientific evidence of these findings, arguing that the new cells may be of glial origin.

The functional relevance of adult neurogenesis is uncertain,[18] but there is some evidence that hippocampal adult neurogenesis is important for learning and memory.[19] Multiple mechanisms for the relationship between increased neurogenesis and improved cognition have been suggested, including computational theories to demonstrate that new neurons increase memory capacity,[20] reduce interference between memories,[21] or add information about time to memories.[22] Experiments aimed at ablating neurogenesis have proven inconclusive, but several studies have proposed neurogenic-dependence in some types of learning,[23] and others seeing no effect.[24] Studies have demonstrated that the act of learning itself is associated with increased neuronal survival.[25] However, the overall findings that adult neurogenesis is important for any kind of learning are equivocal.

Adult-born neurons appear to have a role in the regulation of stress. Studies have linked neurogenesis to the beneficial actions of specific antidepressants, suggesting a connection between decreased hippocampal neurogenesis and depression.[26][27] In a subsequent paper, scientists demonstrated that the behavioral benefits of antidepressant administration in mice is reversed when neurogenesis is prevented with x-irradiation techniques.[28] In fact, new-born neurons are more excitable than older neurons due to a differential expression of GABA receptors.[citation needed] A plausible model, therefore, is that these neurons augment the role of the hippocampus in the negative feedback mechanism of the HPA-axis (physiological stress) and perhaps in inhibiting the amygdala (the region of brain responsible for fearful responses to stimuli).[vague] Indeed, suppression of adult neurogenesis can lead to an increased HPA-axis stress response in mildly stressful situations.[29] This is consistent with numerous findings linking stress-relieving activities (learning, exposure to a new yet benign environment, and exercise) to increased levels of neurogenesis, as well as the observation that animals exposed to physiological stress (cortisol) or psychological stress (e.g. isolation) show markedly decreased levels of new-born neurons. Strikingly, the elevation of newborn neurons by antidepressants improves, under chronic stress conditions, the hippocampal control on the stress response (including the activity of the HPA axis and of stress-integrative brain nuclei), then leading to recovery; without newborn neurons, antidepressants are unable to restore the regulation of the stress response and recovery becomes impossible.[30]

Some studies have hypothesized that learning and memory are linked to depression, and that neurogenesis may promote neuroplasticity. One study proposes that mood may be regulated, at a base level, by plasticity, and thus not chemistry. Accordingly, the effects of antidepressant treatment would only be secondary to change in plasticity.[31]

Possible use in treating Parkinson's disease

Parkinson's disease is a neurodegenerative disorder characterized by a progressive loss of dopaminergic neurons in the nigrostriatal projection. Transplantation of fetal dopaminergic precursor cells has paved the way for the possibility of a cell replacement therapy that could ameliorate clinical symptoms in affected patients.[33] Recent years have provided evidence for the existence of neural stem cells with the potential to produce new neurons, particularly of a dopaminergic phenotype, in the adult mammalian brain.[34][35][36] Experimental depletion of dopamine in rodents decreases precursor cell proliferation in both the subependymal zone and the subgranular zone.[37] Proliferation is restored completely by a selective agonist of D2-like (D2L) receptors.[37] Neural stem cells have been identified in the neurogenic brain regions, where neurogenesis is constitutively ongoing, but also in the non-neurogenic zones, such as the midbrain and the striatum, where neurogenesis is not thought to occur under normal physiological conditions.[33] A detailed understanding of the factors governing adult neural stem cells in vivo may ultimately lead to elegant cell therapies for neurodegenerative disorders such as Parkinson's disease by mobilizing autologous endogenous neural stem cells to replace degenerated neurons.[33]

Reinforcing drugs such as amphetamines and opiates induce behavioral sensitization upon repeated administration by inducing dopaminergic neurogenesis in the ventral tegmental area (VTA) and substantia nigra pars compacta (SNc).[38][39][40][41][42] This occurs through activation of dopamine receptors in these areas which produces glutamate release and subsequent elevation of local basic fibroblast growth factor (bFGF) concentrations.[38][39][40][41][42] The consequences of these actions are potentiated reward responses and therefore increased drug cravings and consumption which underlie abuse and addiction. Whether these mechanisms could be exploited for the purpose of enhancing basal hedonic tone is unknown.

Scientists have shown that physical activity in the form of voluntary exercise results in an increase in the number of newborn neurons in the hippocampus of aging mice. The same study demonstrates an enhancement in learning of the "runner" (physically active) mice.[43][44] Another research, nonetheless, demonstrated that mice exercising that did not produce beta-endorphin, a mood-elevating hormone, had no change in neurogenesis. Yet, mice that did produce this hormone, along with exercising, exhibited an increase in newborn cells and their rate of survival ( http://www.sfn.org/index.aspx?pagename=brainbriefings_adult_neurogenesis). While the association between exercise-mediated neurogenesis and enhancement of learning remains unclear, this study could have strong implications in the fields of aging and/or [Alzheimer's disease]].

Neurogenesis is substantially reduced in the hippocampus of aged animals, raising the possibility that it may be linked to age-related declines in hippocampal function. Given that neurogenesis occurs throughout life, it might be expected that the hippocampus would steadily increase in size during adulthood, and that therefore the number of granule cells would be increased in aged animals. However, this is not the case, indicating that proliferation is balanced by cell death. Thus, it is not the addition of new neurons into the hippocampus that seems to be linked to hippocampal functions, but rather the rate of turnover of granule cells.[45].

Many factors may affect the rate of hippocampal neurogenesis. Exercise and an enriched environment have been shown to promote the survival of neurons and the successful integration of newborn cells into the existing hippocampus.,[43][48][49][50] Another factor is central nervous system injury since neurogenesis occurs after cerebral ischemia,[51] epileptic seizures,[52] and bacterial meningitis.[53] On the other hand, conditions such as chronic stress and aging can result in a decreased neuronal proliferation.[54][55][56]

Circulating factors within the blood may reduce neurogenesis. In healthy aging humans, the plasma and cerebrospinal fluid levels of certain chemokines are elevated. In a mouse model, plasma levels of these chemokines correlate with reduced neurogenesis, suggesting that neurogenesis may be modulated by certain global age-dependent systemic changes. These chemokines include CCL11, CCL2 and CCL12, which are highly localized on mouse and human chromosomes, implicating a genetic locus in aging.[57]

Neural stem cells (NSCs) are the self-renewing, multipotent cells that generate the main phenotypes of the nervous system.

Some studies have shown that use of cannabis results in the growth of new nerve cells in the hippocampus from both embryonic and adult stem cells. In 2005 a clinical study of rats at the University of Saskatchewan showed regeneration of nerve cells in the hippocampus.[58] Studies have shown that a synthetic drug resembling THC, the main psychoactive ingredient in marijuana, provides some protection against brain inflammation, which might result in better memory at an older age. This is due to receptors in the system that can also influence the production of new neurons (http://www.osu.edu/news/newsitem2227) Nonetheless, a study directed at Rutgers University demonstrated how synchronization of action potentials in the hippocampus of rats was altered after THC administration. Lack of synchronization resulted in impaired performance in a standard test of memory. (http://www.physorg.com/news84048508.html) Moreover, contrary to popular belief, animal studies have revealed that marijuana could provoke fits.(http://www.livescience.com/1134-marijuana-impairs-memory.html)