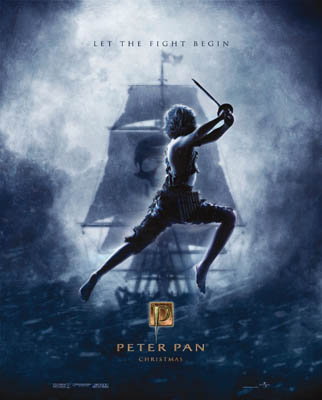 
"Peter Pan" is a released on , , by , and . directed a co-written with which is based on the classic play and novel by . plays the roles of and George Darling, while plays , portrays , and plays . Noted actress plays a supporting role as Aunt Millicent, a new character created for the film. It was the first major live-action production of the story (on stage or screen) to feature an actual "boy" in the title role.

This story is a fairly faithful adaptation of the play and novel by . In it, the perpetually young () from time to time visits his birthplace of , where he becomes enthralled by the stories he hears being told by () to her brothers. Peter invites her to come to and be a "mother" to his gang of Lost Boys. Wendy asks to bring her brothers John (Harry Newell) and Michael (Freddie Popplewell), and Peter teaches them all to fly with him.

Out of jealousy, () tricks the Lost Boys into shooting Wendy as she approaches the island, but Wendy survives and the boys ask her to be their mother and tell them stories. Meanwhile () captures John and Michael and holds them as bait for Peter. Wendy and Peter free them, with help from the princess Tiger Lily ( speaker, ) and the timely arrival of the crocodile that ate Hook's hand.

That night, Peter and Wendy share a "fairy dance", while Hook spies on them, distressed that Peter has "found himself a Wendy". Peter reminds Wendy that "they" are make believe, and Wendy confronts Peter about his feelings about love. Peter becomes angry at her, and tells her to go home if she's not happy. Wendy, in tears, escapes to her little house. Peter returns to the Darling house, and seeing that Wendy's mother is still waiting for the children to come home, he attempts to shut the window (to make Wendy's parents forget about them). But, after a struggle, Wendy's parents manage to reopen the window, refusing to let it be closed.

Hook later finds Wendy and takes her to his ship "Jolly Roger", where he entices her with a job telling stories to the crew, then sends a spy to follow her to the Lost Boys' underground lair. The pirates capture her and the boys by gagging every one of them and carrying them over their shoulders to Hook's ship, but since Hook is unable to reach Peter, he leaves poison for Peter to drink when he wakes up. Tink stops him, poisoning herself in the process; Peter reaches out to the other children sleeping around the world, the Darlings, and even the pirates to sustain her with their belief in fairies.

Peter and Tink save the children from walking the plank, and they all fight the pirates. Hook gets sprinkled with Tink's fairy dust, and duels Peter in the air, weakening him with taunts about Wendy abandoning him and growing up. Peter finally falls, unable to fight anymore and gives in to inevitable death. But with a "thimble"(kiss) from Wendy, Peter recovers and sends Hook above the crocodile. The crocodile takes a jump out of the water and snaps his jaws around Hook. Hook begins to think unhappy thoughts, which drags him down and allows the crocodile to swallow him alive. Wendy decides that she belongs back home, and returns to London with her brothers and the Lost Boys. Peter chooses not to grow up.

In an alternate ending based on Barrie's epilogue, included on the DVD release with unfinished special effects, Peter returns to the London house many years later, finding Wendy as a grown mother. He is briefly dismayed at what has happend to her, then turns to her daughter Jane and takes the girl with him to Neverland.

The visual effects in the film are a mixture of practical and digital. The fairies that appear in the film are actors composited into the movie with some digital enhancements. According to actor Jason Isaacs, the filmmakers were impressed with actress Ludivine Sagnier's performence and decided to abandon their plans to make Tinkerbell entirely computer animated.

A complex harness was built to send the live-action actors rotating and gliding through the air for the flight sequences. They were then composited into the shots of London and Neverland, although they are sometimes replaced with computer-generated figures. Other aspects of bringing the fantastic story to life include the complex sword-fighting sequences, for which the actors were trained. Sumpter said that, "I had to train for five months before the shoot. I had to do harness training to learn how to fly and learn how to swordfight," and that, "I got stabbed a couple of times with a sword."

Sumpter grew several inches over the course of the film's production, requiring staging tricks to retain Hook's height advantage over Peter in face-to-face scenes late in the process. Hollywood-based producer Lucy Fisher also said that, ""The window he flies out of had to be enlarged twice."

The film is dedicated to , who was executive producer of the 1991 film "Hook". Al-Fayed planned to produced a live action version of Peter Pan, and shared his ideas with Princess Diana, who said she "could not wait to see the production once it was underway." Al-Fayed's father, Mohammad Al-Fayed, co-produced the 2003 adaptation of the classic fairy tale after his son died in the car crash which also killed . [ [http://64.233.167.104/search?q=cache:4RtvR54q4XMJ:www.alfayed.com/In%2520Memory/Dodi%2520Al%2520Fayed.aspx+peter+pan+mohammad+al+fayed&hl=en&ct=clnk&cd=1&gl=us 403 Forbidden ] ]

"", a film about and the creation of Peter Pan, was originally scheduled to be released in 2003, but the producers of this film &ndash; who held the screen rights to the story &ndash; refused permission for that film to use scenes from the play unless its release was delayed until the following year.

Filming, which lasted about twelve months and ended in June of 2003, took place entirely inside sound stages on 's Gold Coast and .

However, it earned only $48.4 million at the box office in the United States and another $73.5 million outside of the U.S. [ [http://www.boxofficemojo.com/movies/?id=peterpan03.htm Peter Pan at Box Office Mojo] ] It faced competition from the highly-anticipated "" released the week before, and "" which opened on the same day.

Audiences familiar with only the 1953 Disney animated film may have been disarmed to find the romantic angle of the story so pronounced in this latest film incarnation; although its amorous content consists of little more than a chaste kiss, reviewers at the time made wide mention of the film's romantic tone. The film also contains a scene not in the play in which Peter, still not having formally met Wendy, flies into her house and hovers in flight over her bed, curiously gazing at her; Wendy awakens, and the startled Peter flies away quickly through the open window. Wendy is left believing that she dreamed the incident. The next day, she makes a drawing in school of Peter hovering over her, and the horrified schoolteacher mistakenly assumes it to have a darker meaning. The incident is played in the film as innocent comedy whose supposed goes right over the heads of younger viewers, but apparently some audiences were offended by its inclusion.

Another scene not present in the book — and the biggest change from the novel to the screen — was the slightly modified ending involving the legendary duel between Hook and Pan on the pirate ship, whose alteration may have found disappointment among purists. The scene has Hook grab Tinker Bell to thereafter be made able to fly, eventually fighting Peter with his newfound ability. Another minor surprise was that despite the film's mature and bittersweet tone, they did not keep the book's ending where Peter forgets about Wendy only to return years later, when she is a grown-up woman. This ending was filmed and is alluded to during the final battle between Hook and Peter, but was not included in the final cut. The deleted ending is featured as an extra in most releases on the DVD.