This article is about the type of confection generally. For specific types of candy, see Candies. For other uses, see Candy (disambiguation). 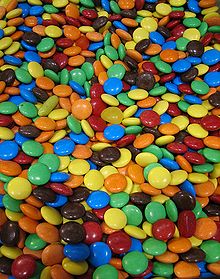 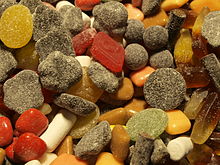 A selection of mixed candy. 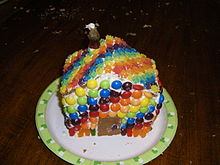 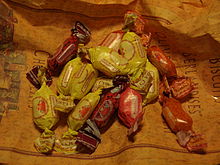 Candy, specifically sugar candy, is a confection made from a concentrated solution of sugar in water, to which flavorings and colorants are added. Candies come in numerous colors and varieties and have a long history in popular culture.

The Middle English word "candy" began to be used in the late 13th century, coming into English from the Old French çucre candi, derived in turn from Persian Qand (=قند) and Qandi (=قندی), "cane sugar".[1] In North America, candy is a broad category that includes candy bars, chocolates, licorice, sour candies, salty candies, tart candies, hard candies, taffies, gumdrops, marshmallows, and more.[citation needed] Vegetables, fruit, or nuts which have been glazed and coated with sugar are said to be candied.

Outside North America, the generic English-language name for candy is "sweets" or "confectionery" (United Kingdom, Ireland, South Africa and other commonwealth countries). In Australia and New Zealand, chocolate, sweets or candy is collectively known as "lollies".

A popular candy in Latin America is the so-called pirulín (also known as pirulí), which is a multicolor, conic-shaped hard candy of about 10 to 15 cm long, with a sharp conical or pyramidal point, with a stick in the base, and wrapped in cellophane.

Commercially, candies are often divided into three groups, according to the amount of sugar they contain:[2]

Each of these three groups contains both crystalline and amorphous candies. 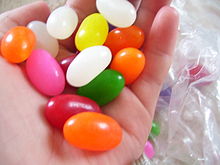 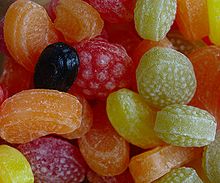 Candy is made by dissolving sugar in water or milk to form a syrup, which is boiled until it reaches the desired concentration or starts to caramelize. The type of candy depends on the ingredients and how long the mixture is boiled. Candy comes in a wide variety of textures, from soft and chewy to hard and brittle. Some examples are: caramel candy, toffee, fudge, praline, tablet, gumdrops, jelly beans, rock candy, lollipops, taffy, cotton candy, candy canes, peppermint sticks, peanut brittle, chocolate-coated raisins or peanuts, hard candy (called boiled sweets in British English) and candy bars.

The names come from the methods used to test the syrup before thermometers became affordable. The "thread" stage is tested by cooling a little syrup, and pulling it between the thumb and forefinger. When the correct stage is reached, a thread will form. This stage is used for making syrups. For subsequent stages, a small spoonful of syrup is dropped into cold water, and the characteristics of the resulting lump are evaluated to determine the concentration of the syrup. A smooth lump indicates "ball" stages, with the corresponding hardness described. At the "soft crack" stage, the syrup forms threads that are just pliable. At the "hard crack" stage, the threads are brittle.[4]

This method is still used today in some kitchens. A candy thermometer is more convenient, but has the drawback of not automatically adjusting for local conditions such as altitude, as the cold water test does.

Once the syrup reaches 340 °F (171 °C) or higher, the sucrose molecules break down into many simpler sugars, creating an amber-colored substance known as caramel. This should not be confused with caramel candy, although it is the candy's main flavoring. 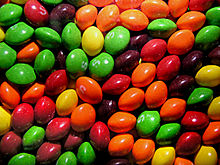 Candy at a souq in Damascus, Syria.

Some candy, including marshmallows and gummi bears, contain gelatin derived from animal collagen, a protein found in skin and bones, and is thus avoided by vegetarians and vegans. "Kosher gelatin" is also unsuitable for vegetarians and vegans, as it is derived from fish bones.[5] Other substances, such as agar, pectin, starch and gum arabic may also be used as setting and gelling agents, and can be used in place of gelatin.

Other ingredients commonly found in candy that are not suitable for vegetarian or vegan diets include carmine, a red dye made from cochineal beetles, and confectioner's glaze, which may contain wings or other insect parts.

Because of its high sugar concentration, bacteria is not usually able to grow in candy. As a result, the shelf life of candy is longer than for many foods. Most candies can be safely stored in their original packaging at room temperature in a dry, dark cupboard for months or years. As a rule, the softer the candy or the damper the storage area, the sooner it goes stale.[6]

Shelf life considerations with most candies are focused on appearance, taste, and texture, rather than about the potential for food poisoning. That is, old candy may not look pretty or taste very good, even though it is very unlikely to make the eater sick. Candy can be made unsafe by storing it badly, such as in a wet, moldy area. Typical recommendations are these:[6]

Candy generally contains sugar, which can be involved in tooth decay causing cavities. Sugar is a food for several types of bacteria commonly found in the mouth, particularly Streptococcus mutans; when the bacteria metabolize the sugar they create acids in the mouth which demineralize the tooth enamel and can lead to dental caries.[7] To help prevent this dentists recommend that individuals should brush their teeth regularly, particularly after every meal and snack.

Candy has a high glycemic index (GI), which means that it causes a rapid rise in blood sugar levels after ingestion. This is chiefly a concern for people with diabetes, but could also be dangerous to the health of non-diabetics.[8]

Candy can be packaged in various ways, from individual wrapping (in twisting paper, wax paper or cellophane) pieces (commonly used for candy canes and lollipops) to candy bars to bulk packs. "Candy wrapper" or "sweets-wrapper" is a common term for such packaging.[9]