The Cardross road accident refers to a hit and run accident at Cardross, Victoria, Australia at 9.50pm on 18 February 2006,[1] where a driver driving a Ford BA Falcon station wagon, collided with a group of thirteen teenage pedestrians, killing five immediately and injuring eight more. The teenagers were walking along Myall Street, Cardross to a party in nearby Red Cliffs after being dropped by a taxi at an incorrect address.[1]

On 20 February 2006, Thomas Graham Towle, an unemployed 35-year-old father of six from Red Cliffs appeared in the Mildura Magistrates Court,[3] facing 17 charges, including six of culpable driving, five of negligently causing serious injury and one of failing to stop after an accident.[4] Towle made no application for bail and was remanded[5] in custody and ordered to reappear before the Mildura Magistrates Court for a committal hearing to begin during March 2007. His trial before the Supreme Court began in Melbourne on 4 February 2008. 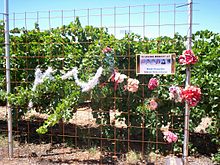 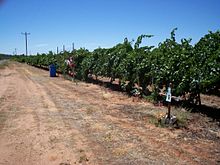 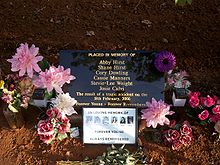 Peter Gallagher, a family member of victim Cory Dowling, read a statement on behalf of the victims families to a crowd of over 600[6] mourners gathered on the lawns at the Mildura Base Hospital on the night of the accident,

"We are now aware that we have lost our beautiful children overnight. In a moment of time, our lives have been changed forever. No words can describe what we are and will be going through.[2]

The Government of Victoria announced it would provide A$40,000 for counselling of victims and relatives.[3]

"It is just such a tragic loss of young lives. It is heartbreaking. Young kids out on a Saturday night to enjoy themselves and something like this happens. I, like all other Australians, (am) dreadfully sorry. I can't do more than express my profound sympathy and condolences to those who have lost their children and their friends in this terrible accident." [7]

Michael Jeffery, the Governor-General of Australia, also sent a message of condolence to the Mildura community, which he had visited during 2005.[8]

Two minutes silence was observed at the Lock Rock Music Festival held in Mildura a week after the accident, on 25 February 2006.[7] The festival was hosted by radio announcer and former Red Cliffs resident, Myf Warhurst.

Towle's family, including his children, reported receiving threats from members of the community,[9] forcing police to make an announcement appealing for calm. Acting Inspector Michael Talbot of the Major Collision Investigation Unit was quoted as saying,

"Creating more tensions is not going to help them. It's not going to help their families come to grips with what has happened. We, as the community, the police, the people of Mildura, all need to work together to keep calm on this and ensure that everything's done smoothly, properly and there's no trouble caused."[5]

The father of the accused, Graham Towle, offered his condolences, saying

"... with pain and tears, I want everyone to know I feel so sorry for the families and friends of the grieving and dreadful loss that has happened. The community has rallied around all concerned and I, as the father and grandfather, publicly thank them for their kindness and words of compassion."[10]

Following Towle's trial, his father, Graham Towle made public statements blaming the victims and their parents for the accident, and claiming his son was blameless.

On 18 February 2007, a memorial service was held at Mildura's Henderson Park to mark the first anniversary of the accident. A permanent roadside memorial was erected at the scene of the accident in early 2007. [1]

A committal hearing began in Mildura before Magistrate Donna Bakos on 19 March 2007. A total of 42 witnesses including 28 children were called during the two week hearing.[11] Towle was not required to attend the committal hearing due to concerns for his safety [4] and appeared briefly via video link at the beginning of committal proceedings.[11]

It was alleged Towle drank bourbon whiskey mixed with Coca-Cola earlier in the day and allowed his four year old child to sit on his lap while driving[12][13] at speeds of up to 150 kilometres per hour shortly before the accident occurred. Witness, Matthew Orsini, denied the group of teenagers had been walking on the road.[14]

Towle told police he was travelling at approximately 90 kilometres per hour, and that the corner "just jumped out at him".[15]

"By the time I was at the corner, it was pretty sharp, I put me foot on the brake and lost control of the car and then it went sideways into a group of people ... so close to the road."

Towle described the scene to police as "absolute horror".

"People laying down were saying, 'please help me'. I went over to one lady who was unconscious and said are you all right and someone said 'you just get away from them', then I thought with the other fellas on the road, you know, I better get out of here. There was two cars that had pulled up so I knew that there was help on its way, I just didn’t leave them stranded."[16]

Towle fled the scene, leaving his four year old son and ten year old daughter behind. He telephoned police to notify them of his whereabouts five hours after the accident. Andrew Arden, a teenager present at the crash scene, denied threatening to kill Towle immediately after the accident occurred, however admitted during committal hearing proceedings he yelled at Towle, saying "You f****n' bastard, what have you done?" and then threw a beer bottle at him.[4]

Towle was reported to be hysterical and suicidal in the hours following the accident. On advice from his lawyer, Towle also refused to provide a blood sample to police.[17]

"I don't believe I did – I did anything wrong. It was a complete accident ... no driver in the world would have been able to control that corner, not even Michael Schumacher ... unless there were was a speed sign saying to slow down as the corner was approaching." [18]

Defence lawyer for Towle, Brendan Murphy, QC said the legal rights of his client had been damaged, saying,

"It will be demonstrated throughout this committal that there has been carried out by Victorian police investigators a sanitisation of statements of witnesses and as a result there has been an exclusion of important factors and this could have the result of depriving the defendant in this case a fair go."[19]

The vehicle allegedly involved in the accident was sent to Japan for scrap metal without the consent of the defendants defence team.[13]

ABC TV's Media Watch highlighted a front page article in The Age newspaper where previous court attendances of the defendant were listed, an action Media Watch suggests could influence a jury.[20]

The trial of Thomas Graham Towle began on 4 February 2008 before the Victorian Supreme Court and was expected to run for four to five weeks. On 31 March 2008 he was found guilty and sentenced to 10 years with a minimum of 7 years, of which Towle had already served 2 years. Later Thomas Graham Towle appealed the sentence but the original judgement was upheld.[22][23]