The Crazy 8's
This article is about the band. For the card game, see Crazy Eights.

The Crazy 8s, one of the more popular college bands to have emerged during the 1980s from the Pacific Northwest (of the United States)[citation needed], made their way to the top of the charts (hitting the space for #1 on College Radio). Their most celebrated pieces are "Johnny Q." and "Law and Order."

By the time the Crazy 8s were ready to disband, they accumulated a large fan following throughout colleges, towns, and cities along the West Coast, however, they were unable to make the transition to mainstream musical success.

Crazy 8s were formed at Oregon State University in Corvallis, Oregon in 1982, as "The Cheeks." [1] Because a UK band had already used this name, they changed their name to "The Sweet Cheeks". Notorious for their raucous frat/house party gigs, covering tunes from their favorite bands of the day, they were just beginning to build a following, when Todd Duncan, the sax player for the Eugene, OR rock band, "The Sneakers", who had just recently broken up, came to The Sweet Cheeks with a proposal: The Sneakers had a gig coming up, opening for Billy Rancher and the Unreal Gods at La Bamba's in Portland, OR. Todd wanted to change the name of the band to "The Crazy 8's" and had a number of other songs for the band to work up before the gig, which was a month away. The newly monikered Crazy 8s members rose to the occasion, and played to rousing applause, and the notice of Billy Rancher's fans, and Tony DiMicola, owner of La Bamba's. This led to many gigs, over the next few months, of opening for Billy and gang, and becoming a band of note on the ever evolving music scene in Portland.

The rock/new wave/ska band performed with a national act for the first time when they opened for Romeo Void at Oregon State Oct. 5th, 1982, in addition to an appearance with The English Beat at the University of Oregon in 1982.[2] In an appearance in the Rolling Stone magazine, the Crazy 8s were defined as one one of "nine bands to watch, [chosen by] radio programmers." [3] In addition, Crazy 8s have played alongside several well-known bands such as The Clash, the Violent Femmes, The Red Hot Chili Peppers, Sonic Youth, The Three O'Clock, and the Beach Boys, among several others, all between 1984 and 1985.[2] 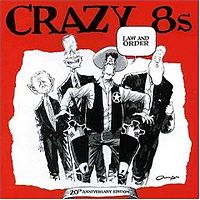 The cover of the band's Law and Order album has featured a series of cartoons by award winning cartoonist Jack Ohman. Ohman's image for the original issue of the album, a caricature of President Ronald Reagan as a gunslinger, toting nuclear missiles in his holsters, has been updated for successive reissues of the album. The most recent version of the Law and Order cover, for the album's 20th Anniversary, includes caricatures of Presidents Reagan, George H. W. Bush, Bill Clinton, and George W. Bush.

In order to release their hit debut album, "Law and Order," in 1983, the band formed their own label titled "RedRum Records." Not having the monetary means to fund such an endeavor, the 8's turned to Joe Johnson's brother, Steve Johnson, Oregon State University and NBA player, to invest $8000 in the recording, production and distribution of the album. Having created said label, they rejected offers from several major labels such as Warner Brothers Label and others of the like. With the release of the hit single, "Johnny Q", the band's album status elevated to the "Top 20" on the Gavin Report.[4]

Crazy 8s appeared in several newspapers, magazines, and other reliable news sources, their most prominent being the Rolling Stones article mentioned above.[3] Other news sources include the Oregonian, The Rocket, the Seattle Times, the Chicago Sun-Times, the Scene Magazine, ISU Daily, The Varsity, Two Louies, This Week, the Gazette-Times, The Mast, Billboard, and Willamette Weekly.[5]

Greg Barbrick, a British writer for The Rocket, wrote:

For Barbrick, Crazy 8s was a group that deserved to be "international sensations." In another appearance in The Rocket, an issue that was released not long after the Rolling Stone article, the main article stated that:

However, as the article points out, Crazy 8s did not have the chance to get on mainstream pop culture.[7]

Crazy 8s were the only independent release to get their song to hit number 69 (or higher) in Tower Record's Pulse Chainwide Sales Chart. In 1985, their song, "Touchy Situation", earned them a #6 hit at CFNY (Toronto) and a #13 hit at Z100 (Portland, Oregon).[5]

All albums were released under the Crazy 8s' official label, RedRum Records.[5]

2008 saw the opening of the Crazy 8's official website [1], which features information on interviews, discography, upcoming performances, and important musical links relating to the band, in addition to other forms of information.

Player of the Year Award:

Horn Player of the Year Award, The Crystal Award: