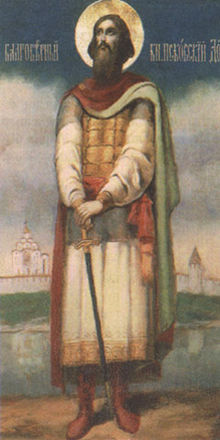 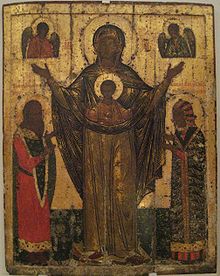 Our Lady of Mirozh with S.Dovmont and his wife Maria

Daumantas, later Dovmont[1] (Russian: Довмонт, Belarusian: Даўмонт), Christian name Timothy[2] (Russian: Тимофей), ; c. 1240? – May 17, 1299), was a Lithuanian princeling best remembered as a military leader of the Pskov Republic between 1266 and 1299. During his term in office, Pskov became de facto independent from Novgorod.

He is venerated as a saint in the Orthodox Church with his feast day observed on May 20.[3]

Until 1265, Daumantas[4] was Duke of Nalšia, a northern province of the Grand Duchy of Lithuania, and was an ally of King Mindaugas. Mindaugas' and Daumantas' wives were sisters. In spite of the family relationship, Daumantas chose to ally himself with Mindaugas' nephew Treniota, who was Duke of Samogitia. Treniota had been steadily increasing his personal power within the kingdom as he tried to spark an all-Balts rebellion against the Teutonic Knights and the Livonian Order.

In 1263, Treniota assassinated Mindaugas and two of his sons. It has been suggested that he acted in collusion with Daumantas. As a result the Grand Duchy of Lithuania relapsed into paganism for another one hundred and twenty years. Some Ruthenian chronicles say that Treniota's motive for the murder was to further his power, and Daumantas' was revenge: after Queen Morta's death c. 1262, Mindaugas took Daumantas' wife for himself. When Mindaugas dispatched a large army towards Bryansk, Daumantas participated in the expedition, but suddenly returned and killed Mindaugas and two of his sons.

According to the Bychowiec Chronicle (a late and not very reliable source), Daumantas received the title, Duke of Utena, as his reward.

When Vaišelga, the eldest son of Mindaugas, entered into an alliance with Shvarn of Halych-Volhynia in 1264, he was able to take revenge for his father's death by killing Treniota. Daumantas and his followers fled to Pskov. 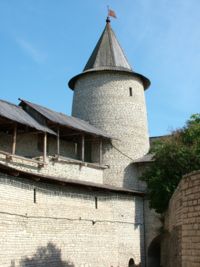 A medieval tower of the Pskov kremlin.

After arriving in Pskov, Dovmont was baptized into Eastern Orthodoxy, assumed the Christian name Timotheus (Ruthenian: Timofei) and married a daughter of Dmitry of Pereslavl, son of Alexander Nevsky. He led Pskovian armies against Lithuanians and defeated them on the bank of the Western Dvina, proceeded to devastate the land of Duke Gerdenis, and captured his two sons and wife. Dovmont's daring spirit, his friendly ways, and the success of his military enterprise persuaded the Pskovians to elect him as their knyaz, or military leader.

Dovmont's election was never sanctioned by the Novgorod Republic, which had traditionally controlled the Pskovian affairs. Prince Yaroslav of Novgorod planned to punish the Pskovians for their willfulness and oust Dovmont from the city, but the Novgorodians refused to support Yaroslav's campaign and, joining their forces with the Pskovians, invaded Lithuania the following year. Dovmont was again in command and returned to Pskov in triumph.

In the next year the Pskovian-Novgorodian alliance was cemented by the invasion of the Livonian Order. The Pskovians, led by Dovmont, joined their forced with the Novgorodians, led by Yaroslav and Alexander Nevsky's son Dmitry, and inflicted a crushing defeat on the knights in the Battle of Rakvere (1268, near modern-day Rakvere). The following year Grand Master of the Order, Otto von Lutterberg, laid siege to Pskov, but Dovmont, supported by the Novgorodians, repelled the attack, personally wounding Lutterberg in battle. The knights sought peace at any cost and their attacks on Pskov and Novgorod ceased for thirty years. 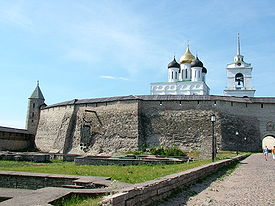 Daumantas on the Millennium of Russia monument in Veliky Novgorod

In 1270, Yaroslav again attempted to interfere into Pskovian affairs and to replace Dovmont by his puppet ruler. The Pskovians stood up for Dovmont, forcing Yaroslav to abandon his plans. In order to strengthen his position, Dovmont married Dmitry's daughter, Maria. In 1282, when his father-in-law was ousted from Vladimir to Koporye, Dovmont made a sally into Ladoga, where he captured Dmitry's treasury from the Novgorodians and transported it to Koporye. Thereupon his name disappears from chronicles for some seventeen years.

In 1299, the Livonian Order unexpectely invaded North-Western Ruthenia and laid siege to Pskov. Having expelled them from the republic, Dovmont abruptly lapsed into illness and died, survived by his alleged son, David of Hrodna. His body was buried in the Trinity Cathedral, where his sword and personal effects would be on exhibit until the 20th century.

According to Pskovian chronicles, no ruler was loved by the citizens of Pskov more than Dovmont; they particularly praise his military skills and wisdom. After the Russian Orthodox Church canonized him, he came to be regarded as a patron saint of Pskov (on the par with Vsevolod Mstislavich). The fortifications erected by Dovmont in Pskov's downtown became known as the "Dovmont Town". A church to the memory of the blessed prince Dovmont-Timofei was consecrated there in 1574.

In the 1990s, Russian author Sergey Kalitin wrote a novel, Hour of the Wolf, about the life of Dovmont and his transition from a "minor Lithuanian noble" to Prince of Pskov.