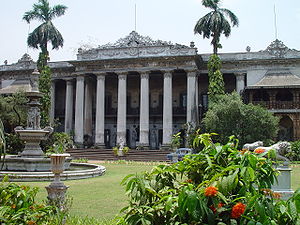 Marble Palace is a palatial nineteenth-century mansion in North Kolkata. It is located at 46, Muktaram Babu Street, Kolkata 700007. It is one of the best-preserved and most elegant houses of nineteenth-century Calcutta.[1] The mansion is famous for its marble walls and floors, from which its name derives.

The house is basically Neoclassical in style, while the plan with its open courtyards is largely traditional Bengali. Adjacent to the court-yard, there is a thakur-dalan, or place of worship for members of the family. The three-storey building has tall fluted Corinthian pillars and ornamented verandas with fretwork and sloping roofs, built in the style of a Chinese pavilion. The premises also include a garden with lawns, a rock garden, a lake and a small zoo.

The house contains large quantities of Western sculpture and Victorian furniture, paintings by European and Indian artists, and other objets d'art. Decorative objects include large chandeliers, clocks, floor to ceiling mirrors, urns, and busts of kings and queens. The house is said to contain two paintings by Rubens, The Marriage of St. Catherine and The Martyrdom of St. Sebastian. There are also said to be two paintings by Sir Joshua Reynolds, The Infant Hercules Strangling the Serpent and Venus and Cupid. Other artists said to figure in the collections include Titian, Murillo, and John Opie.

The collection of art objects is lavish, though random. Genuinely valuable pieces of art share space with a lot of kitschy art objects of little value. Geoffrey Moorhouse in his book Calcutta says it looks "as if they had been scavenged from job lots on the Portobello Road on a series of damp Saturday afternoons."[2]

Located next to the palace is the Marble Palace Zoo, the first zoo opened in India, also by Raja Rajendra Mullick. It now primarily serves as an aviary, including peacocks, hornbills, pelicans, storks, and cranes. The menagerie also contains monkeys and several species of deer.

Because Marble Palace remains a private residence, photography is prohibited. Entry is free, but a permit must be obtained 24 hours in advance from the West Bengal Tourism Information Bureau at BBD Bag, Kolkata. Inside the house, there are guides who give visitors a tour of the house, although the parts of the house which are still inhabited remain off-limits. Marble Palace is open from 10am to 4pm on all days except Mondays and Thursdays.