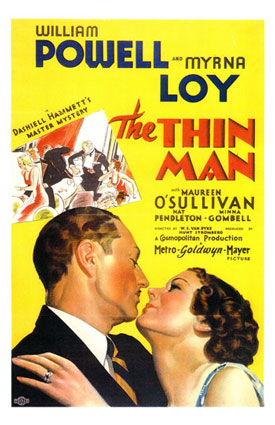 "The Thin Man" was the first of six comic detective s starring and as , a hard-drinking and flirtatious married couple who banter wittily as they solve crimes with ease. Their , the Wire-Haired Fox Terrier , played by Skippy, was also a popular character. Somehow, after drinking a lot of alcohol, Nick never seems to get a headache or even seem seriously drunk, aside from a little wobble every now and then.

Completed in 1934 and nominated for the , the film was directed by from a script by and ; the screenplay was based on the novel "" by , supposedly based on his relationship with playwright . Also appearing in the film were , , , , , , William Henry, and .

The "Thin Man" of the title was actually the lead suspect, but the name was thought by virtually everyone to refer to Nick Charles, and it was used in the titles of the sequels, although no one ever called him that.

In 1997, the film was added to the United States after being deemed "culturally, historically, or aesthetically significant."

Nick Charles, a retired detective, and his wife Nora are attempting to settle down when he's pulled back into service by a friend's disappearance and possible involvement in a murder. The friend, Clyde Wynant (the "thin man" referenced by the film's title), has mysteriously vanished just after his former lover was found dead. Wynant quickly becomes the prime suspect, but his daughter Dorothy can't believe he did it. She convinces Nick to take the case much to the amusement of his socialite wife. With a drink in his hand and a smirk on his face, the detective stumbles off to find clues. The mystery deepens as the empty martini glasses and dead bodies pile up. Between witty exchanges, the couple manages to piece things together. The murderer is finally revealed in an amusing dinner-party scene, featuring all of the suspects.

* as Nicholas 'Nick' Charles
* as Nora Charles
*Skippy as
* as Dorothy Wynant
* as Lt. John Guild
* as Mimi Wynant
* as MacCaulay
* as Tommy
* as Gilbert Wynant
* as Nunheim
* as Chris Jorgenson
* as Julia Wolf
*Edward Ellis as Clyde Wynant
* as Joe Morelli [Brophy would return to the cast in 1944 as Brogan in "".]

Some of the interior scenes were shot inside the Bidwell Mansion in .

*
*
* The Internet Archive [http://www.archive.org/details/Lux14 holds a radio adaptation of the film, originally broadcast on June 8, 1936] by Lux Radio Theater.