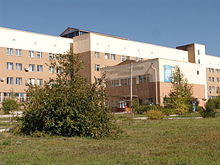 Chita State University (Russian: Читинский Государственный Университет) is an institution of higher education in Chita, Russia. It is the largest educational, scientific and innovative center in Zabaykalsky Krai. Chita State University was established in 1974 on the base of the Technology Department of Irkutsk Technical Institute which was opened earlier in 1966. 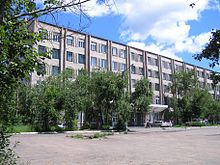 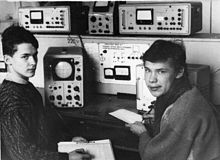 The main fields of scientific research of the School are the following: energy efficiency upgrading of combined heat and power stations machinery, energy saving during the process of its generation and consumption, reduction of heat and power stations' hazardous emissions, drinking water purification and sewage treatment, electronic communication development of economy and education. The School staff has taken an active part in the Chita Power Supply 2001-2002 Program development and realization, as well as in many other regional programs and researches. Their activity is highly valued by city government.

The School comprises two faculties:
1. The Faculty of Power Technology, which includes:

2. The Faculty of Computer Science and Economics, which comprises:

School of Economics and Management

The School of Economics and Management was established in 2003 on the basis of the Faculty of Management of Chita State University.

The School structure comprises two faculties:
1. The Faculty of Economics consists of:

2. The Faculty of Humanities, which consists of:

The School of Economics and Management contributes to the University's international relations development. The students of the School go for practice to China, South Korea, England, Germany, Scotland, and Malta annually. Besides, there is an exchange of students between ChSU and some universities of China. The scientists of the School collaborate with Russian, Chinese, Mongolian, Canadian, French, English, and South Korean researchers and experts.

The School of Mining

The Mining School was established in 1998 on the basis of the Department of Mineral Deposits Exploitation of the Chita Division of Irkutsk Technical Institute. Today the School is one of the biggest centers for training engineers of underground and opencast exploitation of mineral deposits.

2. The Faculty of Geology consisting of:

The School conducts research work in the following fields: improvement of mining technology, exploration of mineral deposits, environmental safety. Significant research work that had been done has led to the formation of the Scientific Research School, which meets the modern requirements of the mining industry and environmental safety of the region. During many years of activity the students and teachers of the School obtained over 100 mechanical patents and inventor's certificates. There is a Specialized Academic Council for Ph.D. Dissertations and Doctoral Dissertations Defending.

School of Construction and Ecology

The School of Construction and Ecology was established in 1999 as result of the reorganization of the Faculty of Civil Engineering, founded in 1972 on the basis of the Chita Branch of Irkutsk Technical Institute.

The school has two faculties:
1. Faculty of Civil Engineering consisting of four departments:

The officials of the Vostok Scientific Research Institute of Complex Water Resources Exploitation and Protection (Vostok SRICWREP) established on the basis of the Water Economy and Engineering Ecology department, solve various actual scientific and technical problems concerning Water Economy. They take part in the realization of such programs as Drinking Water, Protection Against Floods in Chita and Amur Regions, and also in the conception of the state territorial program of Chita region's reservoirs' exploitation, restoration and protection.

School of Technological and Transport Systems

The School of Technological and Transportation Systems of Chita State University was established in June 2000 on the basis of the Mechanical and Machine - Building Faculty of the former Chita State Technical University.
Today the School is one of the biggest educational and scientific centers for training engineers, carrying on research in the field of design and technology development for machine - building and motor transport in Zabaykalsky Krai.

The school has two Faculties:
1. Technological Faculty consisting of:

The school has post-graduate courses to carry on research in the sphere of: - Machine Engineering Technology; - Hoisting and Road-Building Machinery.

Transbaikal Center of International Association of Automobile and Traffic Training, the educational scientific center "Machine-Builder (engineer)", the educational and scientific center of the department of Motor Transport Management, and the laboratory of 3-D objects computer analysis are established at the School.
School scholars carry on research aimed at solving production problems which have occurred at many important city enterprises. Today the results obtained are evaluated not only by Russian scientists, but also by those from Germany, China, and Japan.

The School of Social and Political Systems

2. The Faculty of Social Systems and Regional Forecasting includes:

The School serves as the base for many research centers and workgroups. The School has contracts and collaborates with the universities of such cities as Astrakhan, Birobidzhan, Moscow, Novosibirsk, and Cheboksary.
The School offers a post-graduate course on "Vocational Training Theory and Methodology". A post-graduate course on "Common Psychology" is expected to be established in the nearest future.
Nowadays the School of Social and Political Systems is a center of scientific psychological and sociological research.

The School of Law was established in September of 2003, on the basis of the School of Economy, Management and Law.

The structure of the School comprises two faculties:
1. The Faculty of Law, comprising departments as follows:

2. The faculty of International Law comprising the following departments:

The staff of the School takes an active part in the realization of a number of international legal programs; cooperate with the Human Rights Department of UNESCO. There are several legal and criminalistic laboratories based on the departments of the School.

Post-graduate courses include the following: "Criminal Law and Criminology", "Criminal and Executive Law".

Research Centers, Acting on the basis of ChitGU

Chita Institute of Far Eastern Branch of Russian Academy of Sciences was established in 2005 as a structural unit of ChitSU with the assistance of the Administration of Zabaikalskii Region.

The main goals of Chita branch Institute of Russian Far East Academy of sciences are:

Among the partners of Chita State University are the following Universities and organisations:

The Republic of Belarus: