The A556 is a road in England which extends from the village of Delamere in Cheshire to the village of Bowdon in Greater Manchester. The road contains a mixture of single and dual carriageway sections and forms a large part of the route between Manchester and Chester. The part of the route between the M6 motorway junction 19 and the M56 motorway junction 7 is a major route into Manchester and has been considered for upgrade to Motorway status [1] [2] and was to be known as the A556(M).

The road is frequently very congested, carrying approximately 50,000 vehicles per day, and has a high accident record; between 1998 and 2005, there were around 200 accidents, resulting in 5 fatalities and 39 people being seriously injured[3].

The route begins in the South of Manchester at junction 7 of the M56. It then runs in a Southwesterly direction towards Chester, finishing near Delamere.

At its northern limit, the road ends at a large roundabout with the A56. The A56 continues towards central Manchester via Altrincham. The A556 provides a spur to the M56 at Junction 7. The A556 runs south west as a dual carriageway before changing to a single carriageway with four lanes (that is no physical separation between the traffic flows) and leads to traffic lights at the junction with the A5034 at Bucklow Hill. The route then crosses the A50 at Mere near the Mere Golf and Country Club before continuing to a roundabout at Junction 19 of the M6.

The four-laned single carriageway continues in a south westerly direction to another set of traffic lights. A left (easterly) turn here joins the A5033 towards Knutsford. The road continues curving more towards a westerly direction and undulates on its way towards Northwich with only minor junctions until traffic lights for the junction with Plumley Moor Road (leading towards Plumley) by The Smoker pub. 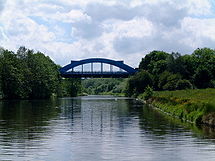 Hartford Bridge (or Blue Bridge as the A556 crosses the Weaver Navigation.

At the junction with the A559 just outside the village of Lostock Gralam the road becomes dual carriageway again (it gains a central reservation) and turns south to bypass the town of Northwich. As the road skirts the south of Northwich, there is a roundabout with the A530 (south towards Middlewich); traffic lights for the Gadbrook Park industrial estate and another roundabout (the 'Davenham' roundabout) for the A533. The road then crosses the River Weaver by an iron bridge, Hartford Bridge, known locally as the Blue Bridge, before heading in a westerly direction to the village of Sandiway near Cuddington.

The road through the village is limited to 40 miles per hour (64 km/h) and has traffic light junctions with Dalefords Lane/School Lane and the A49. Through Sandiway the road also becomes a two lane carriageway and continues as such to its end. As the road enters Sandiway, the Round Tower Lodge can be seen stranded in the central reservation of the road.

After the A49 junction the road road becomes delimited and turns to a south westerly route past Oakmere and into a 50 miles per hour (80 km/h) limit for the junction with the B5152 that leads north to Delamere and Delamere Forest. The road rises up to finish at a junction with the A54 that continues towards Kelsall and Chester. This junction does not obviously mark the end of the A556 since traffic on the A556 has right of way and traffic on the A54 has to give way to join.

There are proposals under the Highways Agency's Route Management Strategy (RMS) to gradual upgrading to dual carriageway standard with a 50 mph speed limit, rather than a full upgrade to motorway.[4]

The section of the A556 between the M6 and M56 is a main route into Manchester. In March 2010, the proposed plan was to divert the A556 along this section to avoid Mere and Bucklow Hill at a budgetary cost of £107 million.[5]