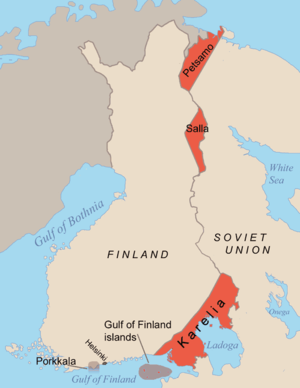 The areas ceded by Finland to the Soviet Union after the Continuation War. Porkkala was returned to Finland in 1956.

The Moscow Armistice was signed between Finland on one side and the Soviet Union and United Kingdom on the other side on September 19, 1944, ending the Continuation War. The Armistice restored the Moscow Peace Treaty of 1940, with a number of modifications.

The final peace treaty between Finland and many of the Allies was signed in Paris in 1947.

The conditions for peace were similar to what had been agreed in the Moscow Peace Treaty of 1940: Finland was obliged to cede parts of Karelia and Salla, as well as certain islands in the Gulf of Finland. The new armistice also handed all of Petsamo to the Soviet Union, and Finland was further compelled to lease Porkkala to the Soviet Union for a period of fifty years (the area was returned to Finnish control in 1956).

Harsher conditions included Finnish payment of $300,000,000 in the form of various commodities over six years to the Soviet Union as war reparations.[1] Finland also agreed to legalise the Communist Party of Finland (after it had made some changes to the party rules) and ban the ones the Soviet Union considered fascist.[2] Further, the individuals that the Soviets considered responsible for the war had to be arrested and put on trial, the most known case being the one of Risto Ryti.[3] The armistice compelled Finland to drive German troops from its territory, leading to the Lapland War 1944-1945.