Fractography is the study of fracture surfaces of materials. Fractographic methods are routinely used to determine the cause of failure in engineering structures, especially in product failure and the practice of forensic engineering or failure analysis. In material science research, fractography is used to develop and evaluate theoretical models of crack growth behavior.

One of the aims of fractographic examination is to determine the cause of failure by studying the characteristics of a fracture surface. Different types of crack growth (e.g. fatigue, stress corrosion cracking, hydrogen embrittlement) produce characteristic features on the surface, which can be used to help identify the failure mode. The overall pattern of cracking can be more important than a single crack, however, especially in the case of brittle materials like ceramics and glasses. 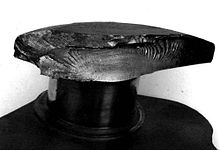 An important aim of fractography is to establish and examine the origin of cracking, as examination at the origin may reveal the cause of crack initiation. Initial fractographic examination is commonly carried out on a macro scale utilising low power optical microscopy and oblique lighting techniques to identify the extent of cracking, possible modes and likely origins. Optical microscopy or macrophotography are often enough to pinpoint the nature of the failure and the causes of crack initiation and growth if the loading pattern is known.

Common features that may cause crack initiation are inclusions, voids or empty holes in the material, contamination, and stress concentrations. "Hachures", are the lines on fracture surfaces which show crack direction. The broken crankshaft shown at right failed from a surface defect near the bulb at lower centre, the single brittle crack growing up into the bulk material by small steps, a problem known as fatigue. The crankshaft also shows hachures which point back to the origin of the fracture. Some modes of crack growth can leave characteristic marks on the surface that identify the mode of crack growth and origin on a macro scale e.g. beachmarks or striations on fatigue cracks. The areas of the product can also be very revealing, especially if there are traces of sub-critical cracks, or cracks which have not grown to completion. They can indicate that the material was faulty when loaded, or alternatively, that the sample was overloaded at the time of failure. 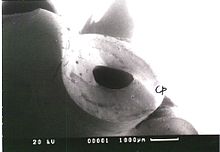 A Cusp (singularity) is formed where brittle cracks meet, as shown on the picture of a failed catheter (Cp). The cusp was formed by brittle failure of the catheter on a breast implant in silicone rubber. The origin of the cracks is at the shoulder at the left-hand side. Identifying such features will allow a fracture surface map to be made of the surface being studied. The implant failed because of overload, all the imposed loads being concentrated at the connection between the catheter and the bag holding salt solution. As a result, the patient reported loss of fluid from the implant, and it was extracted surgically and replaced.

A schematic fracture surface map is a valuable result of visual or microscopic examination. It seeks to isolate and identify the features on the surface which show how the product failed. Such a map can be a valuable way of presenting information which shows clearly how a crack was initiated and grew with time. In the case of the failed breast implant, the crack path was very simple, but the cause more subtle. Further scanning electron microscopy showed numerous microcracks between the bag and the catheter, indicating that the adhesive bond between the two components had failed prematurely, perhaps through faulty manufacture. The material of construction of both bag and catheter, silicone rubber is a physically weak elastomer, and product design must allow for the low tear or shear strength of the material.

In many cases, fractography requires examination at a finer scale, which is usually carried out in a Scanning electron microscope or SEM. The resolution is much higher than the optical microscope, although samples are examined in a partial vacuum and colour is absent. Improved SEM's now allow examination at near atmospheric pressures, so allowing examination of sensitive materials such as those of biological origin. The SEM is especially useful when combined with Energy dispersive X-ray spectroscopy or EDX, which can be performed in the microscope, so very small areas of the sample can be analysed for their elemental composition. 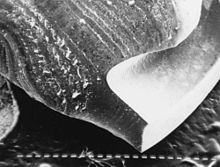 The fracture surface photograph shows a brittle fracture in a car brake seal. Crack growth can be seen from the fine lines or striations in the surface, indicative of fatigue. The problem led to an accident when the crack suddenly grew to completion, hydraulic fluid was lost, the driver lost braking power, and the vehicle crashed. The crack grew from cuts at the edge of the seal, probably caused by sharp particles trapped in the brake cylinder.

Fractography is a widely used technique in forensic engineering, forensic materials engineering and fracture mechanics to understand the causes of failures and also to verify theoretical failure predictions with real life failures. It is of use in forensic science for analysing broken products which have been used as weapons, such as broken bottles for example. Thus a defendant might claim that a bottle was faulty and broke accidentally when it impacted a victim of an assault. Fractography could show the allegation to be false, and that considerable force was needed to smash the bottle before using the broken end as a weapon to deliberately attack the victim. Bullet holes in glass windscreens or windows can also indicate the direction of impact and the energy of the projectile. In these cases, the overall pattern of cracking is vital to reconstructing the sequence of events, rather than the specific characteristics of a single crack. Fractography can determine whether a cause of train derailment was a faulty rail, or if a wing of a plane had fatigue cracks before a crash.