A River Made to Drown In

A River Made to Drown In

Infobox Film
name = A River made to Drown In 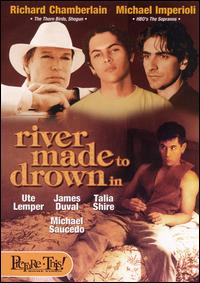 Allen (Imperioli) is a struggling artist who had formerly worked as a street hustler. He has left that life behind and is involved with Eva (Lemper) his art dealer. His life is upset by the arrival of Thaddeus (Chamberlain), a wealthy lawyer near death from . Allen had for a time been Thaddeus's "kept boy" and Thaddeus has come to Allen to die. Before he dies, however, he wants Allen to help him find Jaime (Duval), another young hustler who had taken Allen's place with Thaddeus. Thaddeus is worried that he's infected Jaime with and says he wants to care for him financially.

The film follows Allen's efforts to fulfil Thaddeus's final wishes while struggling to maintain his relationship with Eva and avoid the temptation of being drawn back into his former life on the streets.