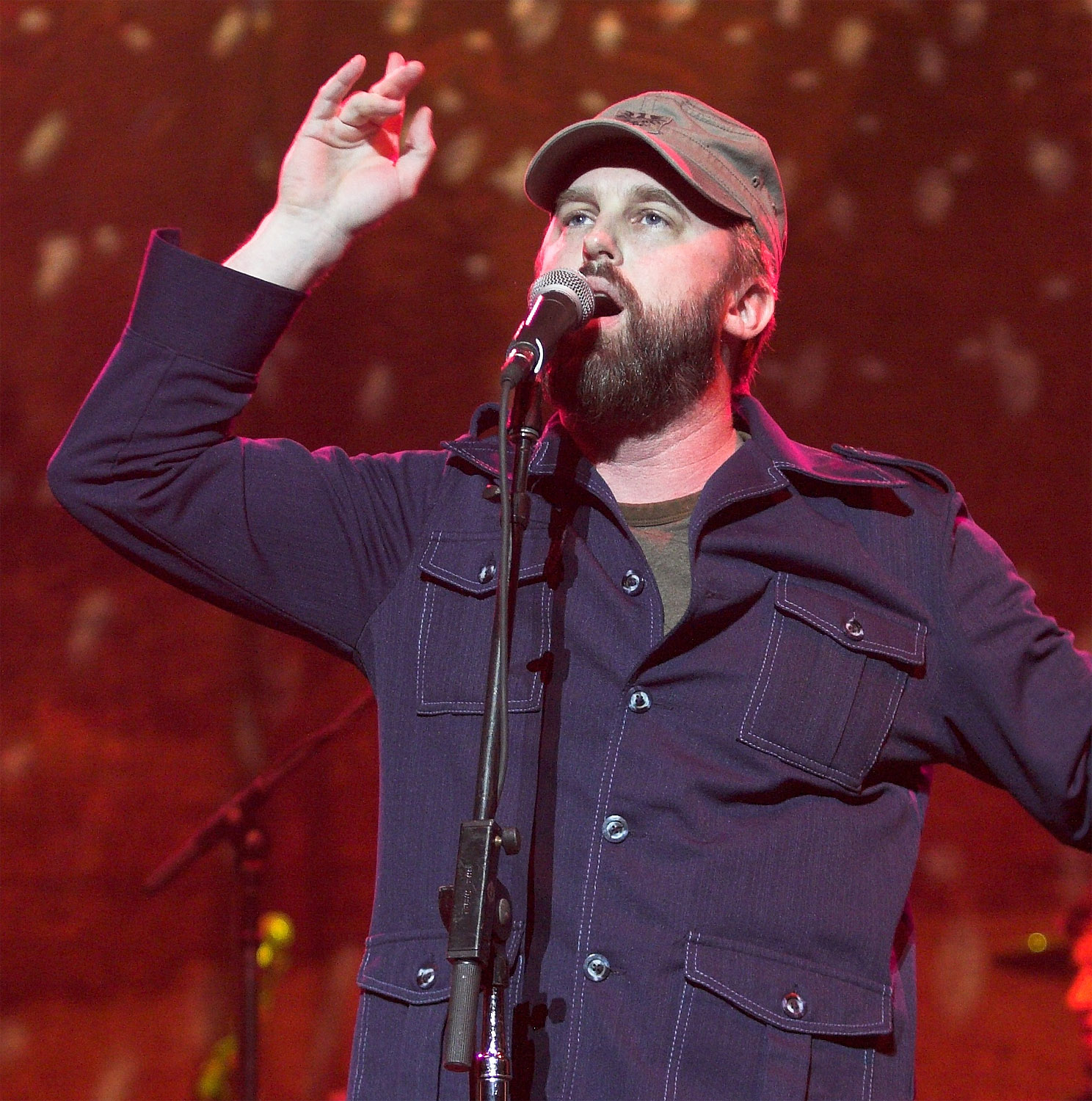 Cake (officially capitalized "CAKE" [cite web|url=http://www.cakemusic.com/news.html|title=CAKE's official web site|accessdate=2007-06-10] ) is an American band from Sacramento, which has had several hits throughout the 1990s and 2000s from six albums.

Cake was formed in 1991 by vocalist/songwriter John McCrea, guitarist Greg Brown, , bassist and drummer . Shon Meckfessel soon left and was replaced by . In 1993, the band released its debut single, "." Although self-released, the single managed to hit number 31 on the US Modern Rock Tracks. After the moderate radio success of their first single, Cake released their debut album entitled "". Eventually, Cake signed a deal with Capricorn records, who in turn released the album nationally. Some time after this deal Gabe Nelson and Frank French left the band.

In 1996, Cake released their second album, "". The album produced the radio gem "The Distance," which "dominated alternative radio that fall". [cite web|url=http://music.yahoo.com/ar-294061-bio--Cake |title=Cake Biography|accessdate=2007-08-24] The next single released from "Fashion Nugget" was a cover of 's "".

Later Victor Damiani was replaced by Gabe Nelson when he rejoined the band.

Cake released their third studio album, "", in 1998. This album contained the hit single "" which reached number 1 on the U.S. Modern Rock Tracks.

In 2001 Cake released their fourth full-length album entitled "". This was Cake's first release under Columbia records. The lead single "" was a major hit on alternative radio stations, climbing to number 7 on the U.S. Modern Rock Tracks.

Cake's fifth album, "", was released on , . It contained the moderately successful singles "" and a cover of the Bread song "." John McCrea [http://www.npr.org/templates/story/story.php?storyId=4482730 discussed the album] with on NPR's in February 2005.

Cake released a compilation, "B-Sides and Rarities", in October 2007. It features covers of 's "War Pigs," 's "Never, Never Gonna Give You Up," and 's "Strangers in the Night," as well as live versions of Cake songs "" and "". "Rarities" is the band's first album on its own label, Upbeat Records.

The band has announced that two new albums are in the works: "", the band's first ; and a new studio album, originally due in fall 2008, but later announced to be early 2009 at the band's Earthfest 2008 performance. John McCrea describes the studio album's sound as "very different" from previous Cake records, also indicating that he will be playing piano much more than usual. [http://jam.canoe.ca/Music/Artists/C/Cake/2008/05/16/5585221-sun.html] Both will be released on Upbeat Records. [ [http://myspace.com/cake CAKE] . "MySpace." Retrieved 10 March 2008.]

Damiani left the band in 1997, replaced by Gabe Nelson. Greg Brown left in 1998, replaced by Xan McCurdy. Brown and Damiani continued to work together when they formed the band . Todd Roper left the band to focus on parenthood after recording "", and has also joined Deathray. Drummer Paulo Baldi joined the band in 2003 during the second "Unlimited Sunshine Tour". (See "Band Lineup" for more)

Although Cake's music is often classified as or , it combines multiple musical genres, such as , , pop, , rap, and country. Cake's music features droll lyrics rife with and (laconically voiced in a rap-like style by lead vocalist/guitarist John McCrea), catchy distorted guitar riffs (courtesy of guitarist Greg Brown until 1998, and bass player until 1997), and a solo trumpet (played by ). Cake's approach to arrangement, composition, and instrumentation has been compared to , , , , , and .

Cake headlined the festival in the summer of 2002 among an eclectic ensemble of bands including , , , Latin fusion band Kinky and bluegrass group . Cake brought back the tour in 2003 with , country singer , garage rockers and a return performance from The Hackensaw Boys. The tour returned in 2007 with the on the East Coast dates, return of for the West Coast dates, and Oakley Hall, Agent Ribbons and King City for all the shows.

In June 2008, lead singer John McCrea told music publication REVUE that he is thinking seriously of quitting touring to become a farmer. [http://www.revuewm.com/?p=228 Interview with John McCrea of CAKE]

Association with other acts

*McCrea contributed backup vocals to the track "Fred Jones Part 2" on ' album "", and made a surprise appearance to do the same during the recording of Folds' "" album.
*McCrea contributes vocals to the track "The Headphonist" on the album Atlas by Mexican electro-pop band Kinky.
* is a band that features former Cake members Greg Brown, Victor Damiani, and Todd Roper.

* A parody instrumental version of "The Distance" from "" is played during the episode of "" when Bart's racehorse, Furious-D, exits the turnstile with his new fashion image.
* The theme song to show "Chuck" is parts of Cake's ''.
*The song "Shadow Stabbing" from "" appears in the opening credits of the movies "Orange County" and "Wordplay". It also appears in the movie "".
* The "" episode "The Road Worrier" featured the song "Frank Sinatra" and used "Rock 'n' Roll Lifestyle" for its closing credits. The song "Daria" was used as closing credits for "The New Kid", "Never There" was used in "Depth Takes a Holiday", "Sheep go to Heaven" was in "The Lost Girls", and "Friend Is a Four-Letter Word" was the closing credit theme of episode 13 of season 4 : "Dye! Dye! My Darling".
*The song "Frank Sinatra" was also featured at the close of "" episode "The Legend of Tennessee Moltisanti."
*Cake's cover of "I Will Survive" was featured in the 2004 Japanese movie "", the 2003 film "Secretary", and the 2003 Canadian comedy, "Mambo Italiano".
*The song "Comfort Eagle" was featured in the 2001 movie "."
*"When You Sleep," "Sheep Go to Heaven," "You Turn the Screws," "Open Book" and "Never There" were featured on the soundtrack to the 2001 film "Sidewalks of New York."
*"Never There" was in the "" episode "" during her surprise party.
*"Hem of Your Garment" was in the movie "."
*"Stickshifts and Safetybelts" is featured in the film .
*"Short Skirt, Long Jacket" was featured in the movies "" and "Waitress", as well as in the "ER" episode "Blood, Sugar, Sex, Magic".
* For two years, "The Distance" was used in the TV advert for the , which takes place in , every Easter Monday.
* The song "Love You Madly" was used in Episode 2 of Season 1 of "Smallville". It was also featured in the opening of the film .
*The beginning of "You Turn The Screws" is featured occasionally as a buffer segment on , along with the song "When You Sleep". Also, excerpts of "Stickshifts and Safetybelts" are often used as buffer segments on "", which is produced by and airs on public radio stations nationwide.
*Cake's cover of "Mahna Mahna" appears on the charity CD "For the Kids" whose proceeds benefit the "VH1 SAVE THE MUSIC" organization.
*The video of "Rock 'n' Roll Lifestyle" aired on an episode of "".
* "Never Gonna Give You Up" featured in the movie American Werewolf in Paris 1997.
*Cake's cover of "Perhaps, Perhaps, Perhaps" was featured in the opening credit sequence of the 1997 Australian movie "Welcome to Woop Woop", the movie "Dream for an Insomniac", the 2001 Mexican film "El Segundo Aire", a Heinz ketchup commercial, a snapple commercial, and the first episode of the television show "Opposite Sex".
* Cake's cover of appears on the PC video game soundtrack
*The cover of "" and other songs from the record "Fashion Nugget" are used in the German film .
*An and version of the song "Italian Leather Sofa" plays over the of the "" (1999-2002)
*Cake's "The Distance" was often used by 's campaign for the during the . The song was frequently played at his rallies and as a buffer before and after his speeches.
*A video mashup of Cake's "" ("We Are Building a Religion") with scenes of Barack Obama, Obama rallies, Obama keychains, etc. was widely distributed on the Internet during the 2008 presidential election.

The theme song to the cartoon series Mission Hill is a faster, instrumental version of "Italian Leather Sofa."reflist