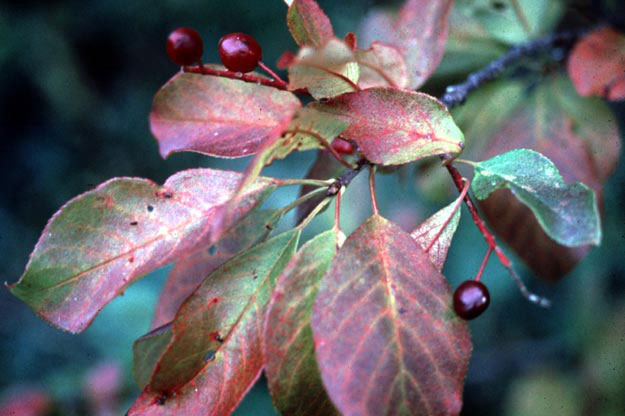 The Chokecherry ("Prunus virginiana") is a species of bird cherry ("Prunus" subgenus "Padus") native to , where it is found almost throughout the continent except for the deep south and the far north. It is a suckering or small growing to 5 m tall. The leaves are oval, 3-10 cm long, with a coarsely serrated margin. The s are produced in s of 15-30 in late spring (well after leaf emergence). The are about 1 cm diameter, bright red, with a very , sour taste. Like chokeberries, chokecherries are very high in antioxidant pigment compounds, like anthocyanins.

The wild Chokecherry is often considered a pest, as it is a host for the , a threat to other fruit plants. However, there are more appreciated s of the chokecherry, such as 'Goertz', which has a non-astringent, and therefore palatable, fruit. Research is being done at the to find and create new cultivars to increase production and processing [http://www.agr.gov.sk.ca/afif/Projects/19960373.pdf] .Chokecherry is closely related to the ("Prunus serotina") of eastern North America; it is most readily distinguished from that by its smaller size (Black Cherry can reach 30 m tall), smaller leaves, and sometimes red ripe fruit. The Chokecherry leaf has a finely serrated margin and is dark green above with a paler underside, while the Black Cherry leaf has numerous blunt edges along its margin and is dark green and smooth. [Citation
last = Elias
first = Thomas S
author-link =
last2 = Dykeman
first2 =Peter A.
author2-link =
title = Edible Wild Plants A North American Field Guide
place =New York NY
publisher = Sterling Publishing Company Inc.
year = 1990
volume =
isbn=0-8069-7488-5
edition =
url =
doi =
id = ] , [http://www.cnr.vt.edu/dendro/dendrology/syllabus/factsheet.cfm?ID=238]

The name chokecherry has also been used (as 'Amur Chokecherry') for the related or Amur Cherry ("Prunus maackii").

Chokecherry is toxic to s, especially after the leaves have wilted (such as after a frost or after branches have been broken) because wilting releases and makes the plant sweet. About 5-10 kg of foliage can be fatal. Symptoms of a horse that has been poisoned include heavy breathing, agitation, and weakness. The leaves of the chokecherry serve as food for s of various . See List of Lepidoptera which feed on "Prunus".

In 2007, Governor John Hoeven signed a bill naming the chokecherry the official fruit of the State of North Dakota.