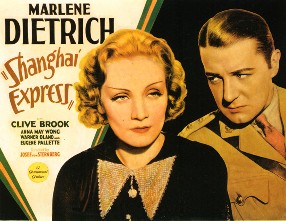 "Shanghai Express" is an American 1932 film directed by . The pre-Code picture stars , , , and . It was written by , based on a story by Harry Hervey. It was the fourth of seven teamings of Sternberg and Dietrich.

The film is memorable for its stylistic black-and-white cinematography. Even though was awarded the , according to Dietrich, it was Sternberg who was responsible for most of it.

In 1931, is embroiled in a . Friends of British Captain Donald 'Doc' Harvey (Clive Brook) envy him because the fabulously notorious Shanghai Lily is also a passenger on the express train from Peiping to . When the name means nothing to him, they inform him that she is a "coaster" or "woman who lives by her wits along the China coast", in other words a .

On the journey, Harvey encounters his former lover, Magdalen (Marlene Dietrich). Five years earlier, she had played a trick on him to gauge his love for her, but it backfired and he left her. She frankly informs him that, in the interim, "It took more than one man to change my name to Shanghai Lily." As time goes on, she makes it clear that she still cares deeply for him. It soon becomes apparent that his feelings also have not changed.

Government soldiers search the train and arrest an enemy agent. Immediately afterwards, Chang sends a coded telegram. Later, the train is taken over by a powerful rebel warlord, who turns out to be Chang. Chang questions the passengers, looking for someone important enough to exchange for his valued aide, the man who was taken earlier. He finds what he wants in Harvey, who is on his way to perform brain surgery on the Governor-General of Shanghai.

While waiting, Chang offers to take Shanghai Lily to his palace, but she claims she has reformed. Overhearing from the next room, Harvey breaks in and knocks Chang down. Because he needs Harvey alive, Chang swallows (but does not forget) the insult and leaves them alone. He then has Hui Fei forcibly brought to him to spend the night.

The government releases Chang's man, but Chang decides to blind Harvey for his insolence. Out of love, Lily offers herself in return for Harvey's safe release. Harvey remains unaware of the danger he is in and Lily's reason for going with Chang. Then, Chang is stabbed to death by Hui Fei. When she informs Harvey, he finds Lily. They board the train and depart before the body is discovered.

Carmichael, trusting his instincts, gets Lily to tell him the truth about her self-sacrifice. However, she insists that he not enlighten Harvey, because love must go hand in hand with faith. In the end, at the Shanghai train station, Harvey finally acknowledges his love for her.

* as Shanghai Lily, aka Magdalen
* as Captain Donald 'Doc' Harvey
* as Hui Fei
* as Mr. Henry Chang
* as Sam Salt
* as Reverend Mr. Carmichael
* as Mrs. Haggerty
* as Eric Baum
* as Major Lenard