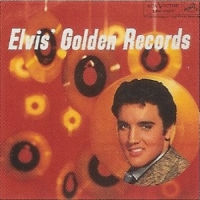 "Elvis' Golden Records" is the fifth album by issued on , LPM 1707, in March 1958, recorded mostly at in , with one session at in New York on January 30, one at Stage One in on August 24, and three at in January and April 1956 at RCA Studios in Nashville. It is a compilation of hit singles released in 1956 and 1957, and is widely believed to be the first album in history. It is the first of five "Elvis' Golden/Gold Records" compilatons, four of which would be released during Presley's lifetime. It peaked at #3 on the Billboard Top Pop Albums chart.

"Golden Records" comprises eight #1 s along with five b-sides, "," "Loving You" "," ", "," and one album track, "Love Me," originally issued on the 1956 LP "Elvis". Every flip-side also hit the chart separately from its parent hit side, with four making the and "Hound Dog" also topping the chart; chart positions noted for those tracks individually.

In the 1950s, a gold record awarded for a single referred to sales of one million units, different from the definition in use by the late 1970s for albums, where a gold record came to mean sales of 500,000 units. Exact figures from the are difficult to confirm, but in the from , , originally released on the EP "" in 1958 and included on disc four of the , the interviewer asks Presley for a tally of his gold records. Presley responds, saying "I have 25 million sellers, and two albums that have sold a million each."

The , reissue added six tracks, with "" an unusual release in that it was issued simultaneously in conjunction with every track from Elvis' debut LP "Elvis Presley" in singles form, more than five months after the release of the album on . Two more charting RCA b-sides, "" and "," and three tracks rounded out the . RCA had purchased the rights to reissue Sun material when buying Elvis' contract from in 1955, using Sun recordings to fill out album tracks throughout the decade.

Although RCA executive was the in-house man for Presley, and nominally in charge of his recording sessions at RCA, accounts by Presley historian and Presley discographer indicate that Presley himself acted as the producer for his RCA sessions in the 1950s.

The unified singles chart was not created until August, 1958, after the release of this compilation, and of course after the release of all of these singles. Chart positions referenced would be taken from the Best Sellers In Stores chart, although early measurement of records also came from the Most Played In Jukeboxes chart.

"Chart positions for singles taken from Billboard Pop Singles chart except as indicated."