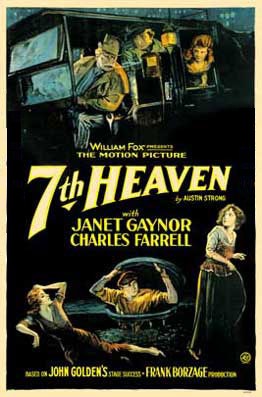 "Seventh Heaven" (1927) is a and one of the first films to be nominated for the (then called "Best Picture, Production"). The film was written by (titles), , (titles) and (play), and directed by .

The movie is a romance starring and . Gaynor won the Academy Award for Best Actress in a Leading Role, Borzage won for Best Director and Glazer won for Best Writing, Adaptation.

"Seventh Heaven" is the 13th highest grossing silent film in cinema history, taking in more than $2.5 million at the box office in 1927.

In 1995, the film was selected for preservation in the United States by the as being "culturally, historically, or aesthetically significant".

Diane is a song by and originally written as a theme song for the movie Seventh Heaven.

A comparatively unknown remake of "Seventh Heaven" was produced as a sound film in 1937, starring , James Stewart, , and , with directing.