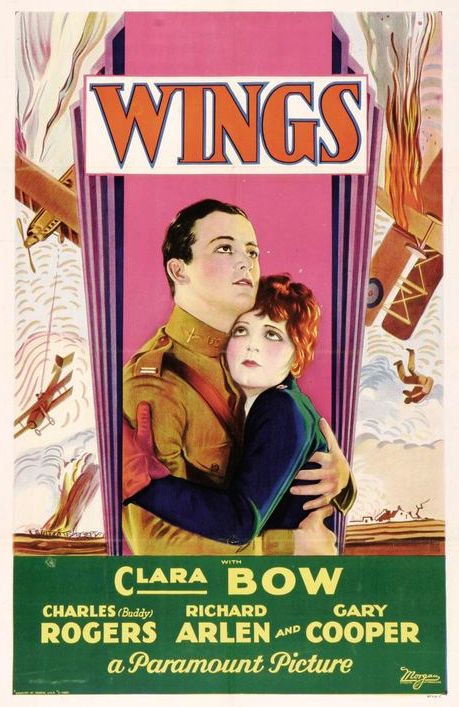 "Wings" (fy|1927) is a silent movie about fighter pilots, directed by and released by . It was the first film to win the -- and the only silent film ever to win Best Picture -- and stars , and , with in a scene which helped launch his star in , and also marked the beginning of his affair with Clara Bow. [TCM [http://www.tcm.com/tcmdb/title.jsp?stid=504086&category=Notes Notes] ]

Jack Powell () and David Armstrong () are rivals in the same small American town, both vying for the attentions of pretty Sylvia Lewis (). Jack fails to realize that "the girl next door", Mary Preston (), is secretly in love with him. The two young men both enlist to become combat pilots. When they leave for training camp, Jack mistakenly believes Sylvia prefers him; she is too kindhearted to disillusion him, but lets David know that she loves him.

Jack and David are billeted together. Their tentmate is Cadet White (), but their acquaintance is all too brief; White is killed in an air crash the same day. Undaunted, the two men endure a rigorous training period, where they go from being enemies to best friends. Upon graduating, they are shipped off to France to fight the Germans.

Mary joins the war effort by becoming an ambulance driver. When she is in Paris, she learns that Jack is on leave there. She finds him, but he is too drunk to recognize her. She puts him to bed, but when two soldiers barge in while she is innocently changing out of a borrowed dress back into her uniform in the same room, she is forced to resign and return to America.

The climax of the story comes with the epic . David is shot down and presumed dead. However, he survives the crash landing, steals a German biplane, and heads for the Allied lines. By a tragic stroke of bad luck, he is spotted by Jack, who is bent on avenging his friend. Jack shoots David down. When Jack lands to pick up a souvenir, he becomes distraught when he learns what he has done, but before David dies, he forgives his comrade.

With the end of the war, Jack returns home to a hero's welcome. When he returns David's effects to his grieving parents, David's mother blames the war, not Jack, for her son's death. Then, Jack is reunited with Mary and realizes he loves her.

* as Mary Preston
* as Jack Powell
* as David Armstrong. Arlen met co-star Ralston on the set and married her in 1927.
* as Sylvia Lewis
* as Herman Schwimpf, a cadet who washes out and becomes an air force mechanic
*Richard Tucker as Air commander
* as Cadet White
* as Sergeant
* as David's father
* as Lieutenant Cameron
* as David's mother
* as Celeste

The film, completed with a then unheard-of budget of $2 million, was the first film to win the (then called "Best Picture, Production") for the film year 1927/28 (and was the only silent film to win), and won a second . The film was written by (story), and , and was directed by , with an original orchestral score by John Stepan Zamecnik (J S Zamecnik), which was uncredited.

It is one of the first films to feature a male-on-male kiss – a fraternal one – in the death scene near the end. It is also one of the first widely released films to show nudity. Clara Bow's breasts can be seen for a quick second during the Paris bedroom scene when army men barge in as she is changing her clothes.

and had served in World War I as military aviators.

The original Paramount release was color tinted and had some sequences in an early process known as . Some prints had synchronized sound effects and music, using the Kinegraphone (later ) process. [ [http://www.silentera.com/PSFL/data/W/Wings1927.html Silent Era : PSFL : Wings (1927) ] ]

"Wings" was an immediate success, premiering on at the Critereo Theatre in New York and playing 63 weeks before being moved to second-run theaters. One of the reasons for its resounding popularity was the public infatuation with aviation in the wake of 's transatlantic flight. [ Farmer 2006, p. 14.]

For many years, "Wings" was considered a "lost" film until a surviving print was found in the Cinémathèque Française film archive and quickly copied to safety film stock. [ [http://www.silentera.com/PSFL/data/W/Wings1927.html Silent Era : PSFL : Wings (1927) ] ] It was again shown in theaters, including some with pipe organs. ["San Francisco Chronicle" "Datebook" magazine] The print used by in the 1990s had a recorded Wurlitzer pipe organ accompaniment. [American Movies Classics] The film has also been shown on . [Turner Classic Movies]

In 1997, "Wings" was selected for preservation in the United States by the as being "culturally, historically, or aesthetically significant".

In , director William A. Wellman's son, William Wellman Jr., authored a book about the film and his father's participation in the making of it, titled "The Man and His Wings: William A. Wellman and the Making of the First Best Picture."

Along with "Cavalcade", "Wings" is one of only two Best Picture winners that is not available on in Region 1.