/ˈɒksəlɨs/)[1] is by far the largest genus in the wood-sorrel family Oxalidaceae: of the approximately 900 known species in the Oxalidaceae, 800 belong here. The genus occurs throughout most of the world, except for the polar areas; species diversity is particularly rich in tropical Brazil, Mexico and South Africa.

Many of the species are known as wood-sorrels (in American English typically written "woodsorrels" or "wood sorrels") as they have an acidic taste reminiscent of the unrelated sorrel (Rumex acetosa) proper. Some species are called yellow-sorrels or pink-sorrels after the color of their flowers instead. Other species are colloquially known as false shamrocks, and some are rather misleadingly called "sourgrasses". For the genus as a whole, the term oxalises is also used. 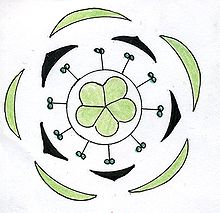 These plants are annual or perennial. The leaves are divided into three to ten or more obovate and top notched leaflets, arranged palmately with all the leaflets of roughly equal size. The majority of species have three leaflets; in these species, the leaves are superficially similar to those of some clovers. Some species exhibit rapid changes in leaf angle in response to temporarily high light intensity to decrease photoinhibition.

The flowers have five petals, which are usually fused at the base, and ten stamens. The petal color varies from white to pink, red or yellow; anthocyanins and xanthophylls may be present or absent but are generally not both present together in significant quantities, meaning that few wood-sorrels have bright orange flowers. The fruit is a small capsule containing several seeds. The roots are often tuberous and succulent, and several species also reproduce vegetatively by production of bulbils, which detach to produce new plants. 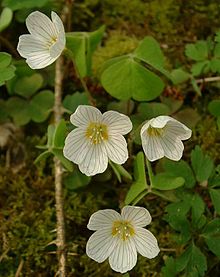 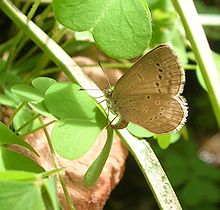 Tuberous woodsorrels provide food for certain small herbivores – such as the Montezuma Quail (Cyrtonyx montezumae). The foliage is eaten by some Lepidoptera, such as the Polyommatini Pale Grass Blue (Pseudozizeeria maha) – which feeds on creeping wood sorrel and others – and Dark Grass Blue (Zizeeria lysimon).

The edible tubers of the oca (O. tuberosa), somewhat similar to a small potato, have long been cultivated for food in Colombia and elsewhere in the northern Andes mountains of South America. The leaves of scurvy-grass sorrel (O. enneaphylla) were eaten by sailors travelling around Patagonia as a source of vitamin C to avoid scurvy. In India, creeping wood sorrel (O. corniculata) is only eaten seasonally, starting December/January. The leaves of common wood sorrel (O. acetosella) may be used to make a lemony-tasting tea when dried. 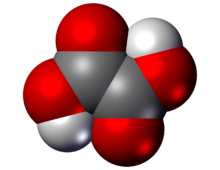 Oxalic acid, the toxin found in many wood-sorrels and other edible plants

A characteristic of members of this genus is that they contain oxalic acid (whose name references the genus), giving the leaves and flowers a sour taste which can make them refreshing to chew.[4] In very large amounts, oxalic acid may be considered slightly toxic, interfering with proper digestion and kidney function. It should be noted, however, that oxalic acid is also present in more commonly consumed foods such as spinach, broccoli, brussel sprouts, grapefruit, chives, and rhubarb, among many others.[5] General scientific consensus seems to be that the risk of sheer toxicity, actual poisoning from oxalic acid, in persons with normal kidney function is "wildly unlikely".[6] The U.S. National Institutes of Health note that oxalic acid is present in many foodstuffs found in the supermarket and its toxicity is generally of little or no consequence for people who eat a variety of foods.[7]

In the past, it was a practice to extract crystals of calcium oxalate for use in treating diseases and as a salt called sal acetosella or "sorrel salt" (also known as "salt of lemon"). Growing oca tuber root caps are covered in a fluorescent slush rich in harmaline and harmine which apparently suppresses pests; this phenomenon has been studied to some extent at the Colorado State University.[8] Creeping wood sorrel and perhaps other species are apparently hyperaccumulators of copper. The Ming Dynasty text Precious Secrets of the Realm of the King of Xin from 1421 describes how O. corniculata can be used to locate copper deposits as well as for geobotanical prospecting. It thus ought to have some potential for phytoremediation of contaminated soils. 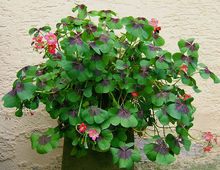 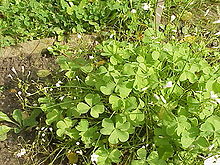 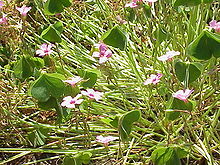 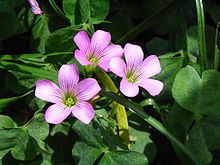 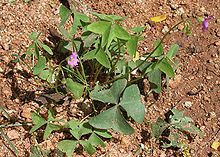 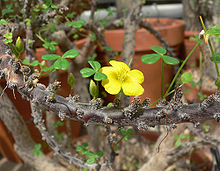 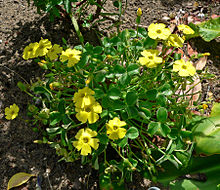 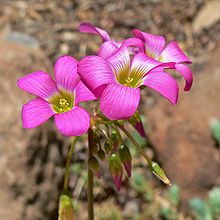 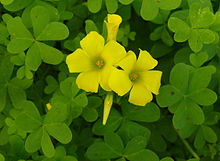 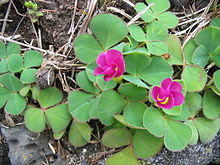 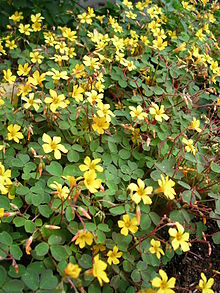