The 1999 season set a record by having five storms reach Category 4 strength, which was later tied by the 2005 season. was the deadliest United States hurricane since in 1972, killing 57 people and causing billions in damage as it moved northward along the Atlantic coast. killed 17 as it tracked eastward across the , the first hurricane known to do so for an extended time period. Lenny, reaching peak winds of convert|155|mi/h|km/h|abbr=on just 13 days before the end of the season, was the strongest Atlantic hurricane in the month of November. 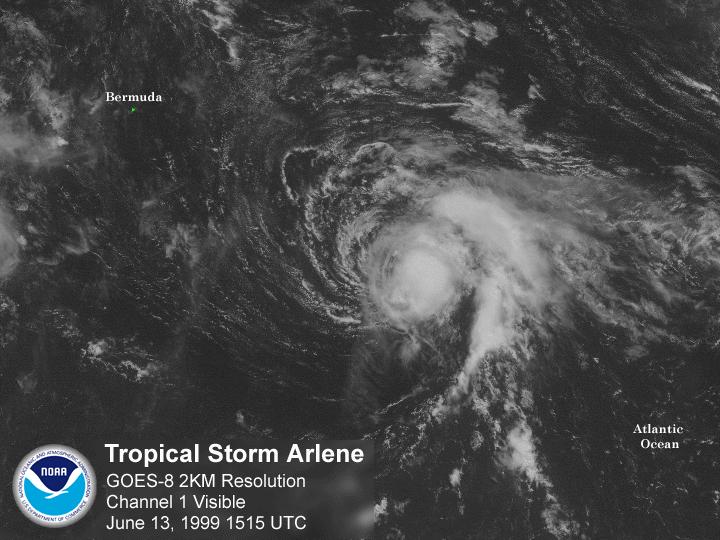 A mid- to upper-level low developed along the tail end of a diffuse front in the central Atlantic Ocean in early June. While moving northward, it generated convection, and developed a small low-level circulation. Based on increased outflow and organization, it was classified as Tropical Depression One on June 11, and under generally favorable conditions it strengthened into Tropical Storm Arlene on the 12th while several hundred miles southeast of . The storm moved roughly northwestward, reaching peak winds of convert|60|mi/h|km/h|abbr=on before coming within convert|115|mi|km of Bermuda on the 17th. It turned north and away from the island where upper level shear caused Arlene to dissipate on June 18. No damages were reported. Arlene was only notable because it developed in the deep tropics in the Atlantic in June, the first such storm since 1979's Ana.

Tropical Depression Two formed in the western Gulf of Mexico from a tropical wave on July 2. It made landfall convert|75|mi|km south-southeast of , on the 3rd, and dissipated shortly thereafter. The system dropped heavy rain to the area amounting to a maximum of 20.37 inches/517 mm at Tanzabaca/Tamasopo in . [Hydrometeorological Prediction Center. [http://www.hpc.ncep.noaa.gov/tropical/rain/td2a1999.html Tropical Depression #2.] Retrieved on .] The system caused no reported deaths or damages.clear 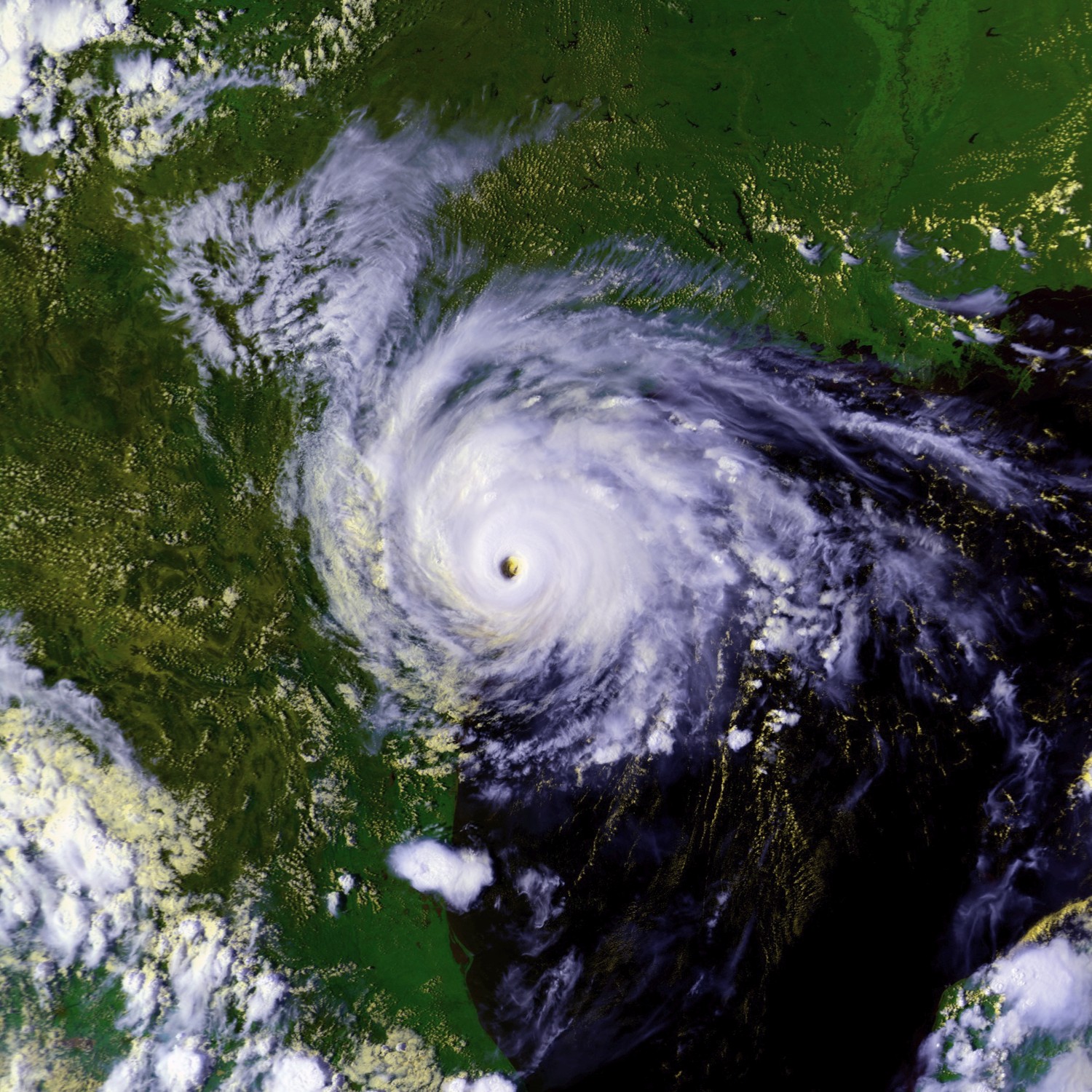 A tropical depression that formed in the on August 18 reached tropical storm strength late on August 19. Bret moved north, and strengthened into a convert|145|mi/h|km/h|abbr=on Category 4 hurricane on August 22. As it approached , Bret turned to the northwest, and made landfall as a Category 3 hurricane at on August 23, becoming the first major hurricane to hit Texas since in 1983. The storm continued inland and dissipated over northern Mexico on August 25. Damage is estimated at $60 million, which is rather low for a hurricane of this intensity. Hurricane Bret made landfall in the sparsely populated , missing to its south and to its north. The hurricane dissipated quickly after its last advisory for the city of .

Track=Cindy 1999 track.pngA tropical wave moved off the coast of on August 18, and quickly developed into Tropical Depression Four on the 19th while around convert|300|mi|km east-southeast of the Islands. Persistent westerly shear initially inhibited development, but a decrease in the shear allowed the depression to strengthen into a tropical storm on the 20th. Cindy quickly attained hurricane status, and weakened back to a tropical storm due to an increase in the shear. The unfavorable conditions abated, and Cindy quickly strengthened into a convert|140|mi/h|km/h|abbr=on Category 4 hurricane while convert|430|mi|km east-southeast of . Shear increased as Cindy turned to the northeast, and the storm dissipated on August 31 as it merged with an extratropical cyclone about convert|1000|mi|km west of the . 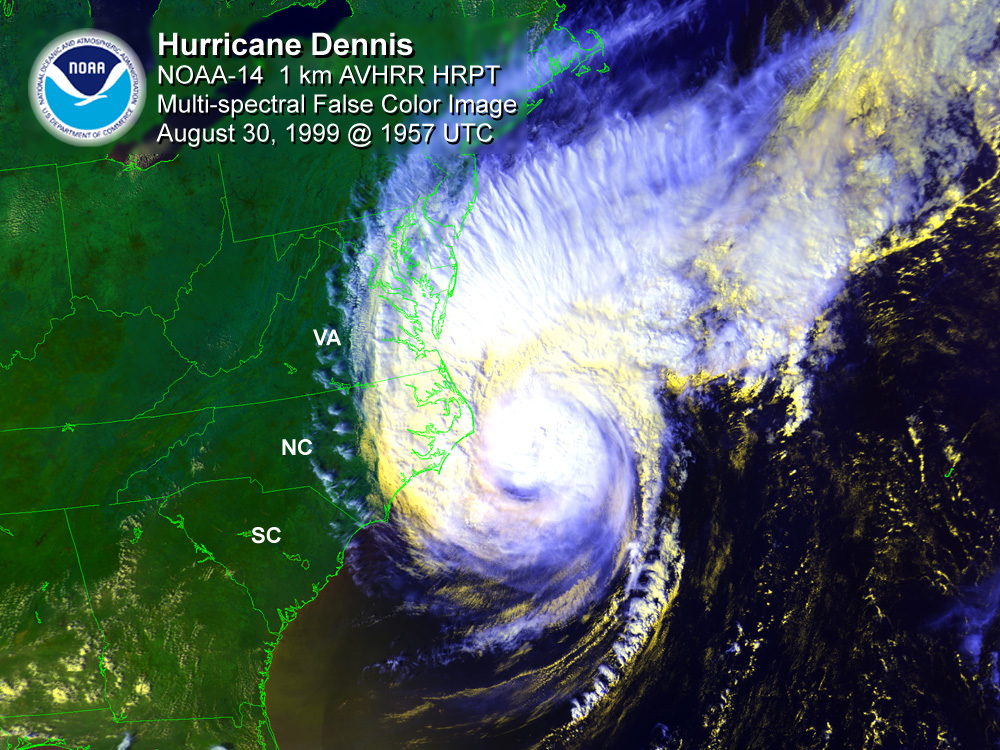 Track=Dennis 1999 track.pngDennis was a Category 2 hurricane that was erratic in both track and intensity. Although it never made landfall as a hurricane, the storm was responsible for producing hurricane-force winds along the coast along with beach . The hurricane caused $157 million in damage, and killed 4 people. The heavy rains from Dennis also set the stage for destructive ing from about 2 weeks later.

Emily formed on August 24 from the same cluster of tropical waves that spawned Hurricane Cindy and Hurricane Dennis. The storm moved roughly north until the 28th when it was absorbed by Hurricane Cindy. Emily never directly affected land and there is no damage reported in association with it.

Tropical Depression Seven began from a tropical wave in the western Gulf of Mexico on September 5. It became better organized as it moved north-northwestward, and hit the town of , , on the 6th before intensifying further. The storm caused heavy rainfall, though damage and death totals are unknown. In , its remnants produced light rainfall, peaking at 3.35 inches in . [Hydrometeorological Prediction Center. [http://www.hpc.ncep.noaa.gov/tropical/rain/td7of1999.html Tropical Depression #7.] Retrieved on .] clear 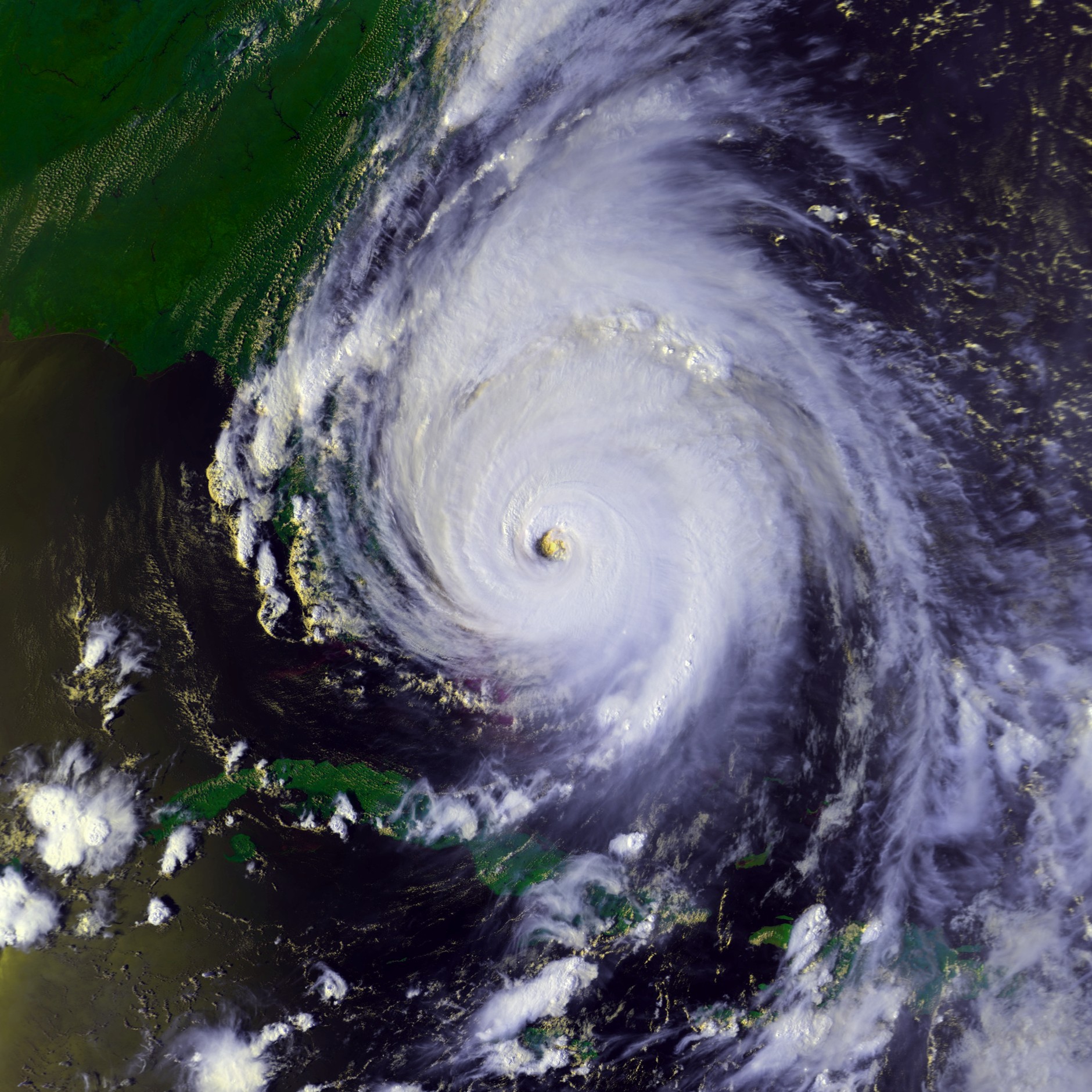 Hurricane Floyd was a large and powerful that was first named on September 8 while about 750 n mi east of the Leeward Islands. Floyd slowly intensified and headed west-northwest, staying well north of the . On September 11, Floyd turned and began moving almost due west and began to strengthen. On the 13th, Floyd was a strong Category 4 hurricane with winds of convert|155|mi/h|km/h|abbr=on, just short of reaching Category 5.

At this point, Hurricane Floyd was just east of the . Floyd weakened slightly as it moved into the islands, striking and later making landfall on Abaco Island on the 14th while at the low end of the Category 4 range. Floyd turned north and paralleled the coast of Florida until making landfall near as a Category 2 storm on September 16. It returned to the ocean near and traveled up the coasts of the and as a tropical storm. It passed over and into .

Floyd caused record rainfall across the east coast, with and setting 24-hour rainfall records of 15.06 in. and 6.63 in. respectively. Portions of New England had rainfall totals nearing 11 in. Floyd generated 9-10 foot storm surges across North Carolina. There are 57 deaths directly blamed on Floyd, 56 in the United States and one on . Most of the deaths were due to freshwater flooding in North Carolina. Floyd was one of the costliest hurricanes on record, with an estimated $4.5 billion in damage. 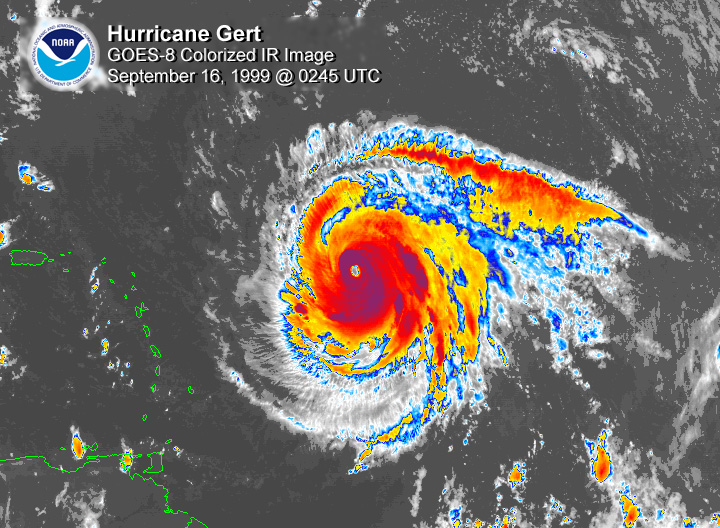 Gert formed from an African tropical wave several hundred miles west of Cape Verde on September 12. Gert's track arced across the Atlantic, and it became a strong Category 4 storm on the 16th. Gert threatened Bermuda as a weakening Category 2 storm, but turned away to the north-northeast. On the 23rd Gert became extratropical and merged with another low pressure system off the coast of Newfoundland.

Gert caused isolated instances of hurricane force winds on Bermuda, but damage there was limited to coastal erosion. No deaths are directly attributable to Gert, although two people drowned in when a large wave swept them into the ocean. This wave may have been generated by Gert, which was over 1000 n mi away from Maine at the time.

Tropical Storm Harvey formed in the eastern Gulf of Mexico about 300 n mi west-southwest of on September 20. Shortly after, Harvey made landfall at on the 21st with peak winds of convert|55|mi/h|km/h|abbr=on and a pressure of 999 mb. After passing over Florida, Harvey merged with an extratropical cyclone over the northern Bahamas on September 22.

Harvey was responsible for no deaths. Molasses Reef, FL had a peak gust of convert|70|mi/h|km/h|abbr=on. Two tornadoes were associated with Harvey, one of which uproofed a house in Collier County. Damage was estimated at 15 million.

A tropical wave organized into Tropical Depression Eleven in the Bay of Campeche on October 4. Under weak steering currents, it drifted southward, then westward, remaining weak due to a broad surface trough over the eastern Gulf of Mexico. The depression merged with the trough on the 6th, though tropical storm force winds remained over coastal waters. The depression's large, unorganized circulation, in combination with previous rainfall along the Mexican coastline, resulted in the worst flooding in at least 40 years for the region with at least 384 casualties attributed to the resulting flood. [ [http://www.hpc.ncep.noaa.gov/tropical/rain/td11of1999.html Tropical Depression 11A Rainfall Page.] Retrieved on .] clear

Tropical Depression Twelve developed from a tropical wave on October 6 between the and the . It moved erratically the west-northwest without developing. While this was going on, the low-level circulation was mostly of the west side of the convection, due to a lower-level trough to the depression's north. Convection diminished and dissipated on September 8 as the low level circulation became less well-defined. However the remnant low-level cloud swirl could be tracked going west-northwest for several days afterwards, until dissipating completely north of the .clear 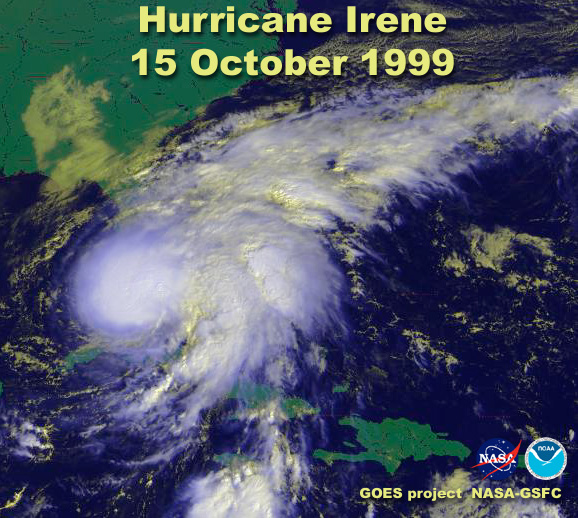 Irene formed on October 12 from a broad trough of low pressure while south of the . It headed north and passed over the Isle of Youth and western on the 14th. While over the , Irene reached hurricane strength. The next day, it made landfall at , and again near , . Half a day later, Irene moved back over water near as a minimal hurricane. It slowly strengthened as it paralleled the Florida through North Carolina. When Irene interacted with a trough from the west while over the warm Gulf Stream waters, the hurricane rapidly intensified to a peak of convert|110|mi/h|km/h|abbr=on, but it accelerated to the northeast, weakening over the cooler waters of the North Atlantic. On the 19th, Irene became extratropical near Newfoundland, and was absorbed by an extratropical low shortly thereafter.

Total damage in Florida is around $900 million (2005 USD). There were no direct deaths in the United States that are attributed to Irene, though there were eight indirect deaths. Damage in Cuba is not known. Irene also contributed slightly to ongoing flood problems in in the aftermath of .

Jose formed on October 8 while convert|400|mi|km east of the Windward Islands. The storm quickly strengthened into a hurricane and over 2,000 people were evacuated from islands in its path. It moved northwest, and as the hurricane passed over Antigua, and St. Martin on the 20th and 21st. Over a foot of rain fell on St. Martin. It weakened to a tropical storm as it approached the and as it neared , Jose turned to the north-northeast. Jose remained on a near-straight line track into the north Atlantic until it lost its tropical characteristics on October 25. It then merged with a non-tropical system.

Jose caused one death in Antigua and one in St. Martin. Extensive damage was reported in St. Martin from flooding and mud slides, but no dollar value is attached to this. Damage to the affected US areas was minimal.

It made landfall at , , during the time it was a tropical storm. The storm only made things a little harder for the people of Nicaragua who were still recovering from . That storm hit Nicaragua almost exactly one year earlier. The storm died over the Yucatan Peninsula on November 1 as it was absorbed by a cold front.

As far as the NHC can tell, Katrina claimed no lives in Nicaragua, and only minor damage was reported. 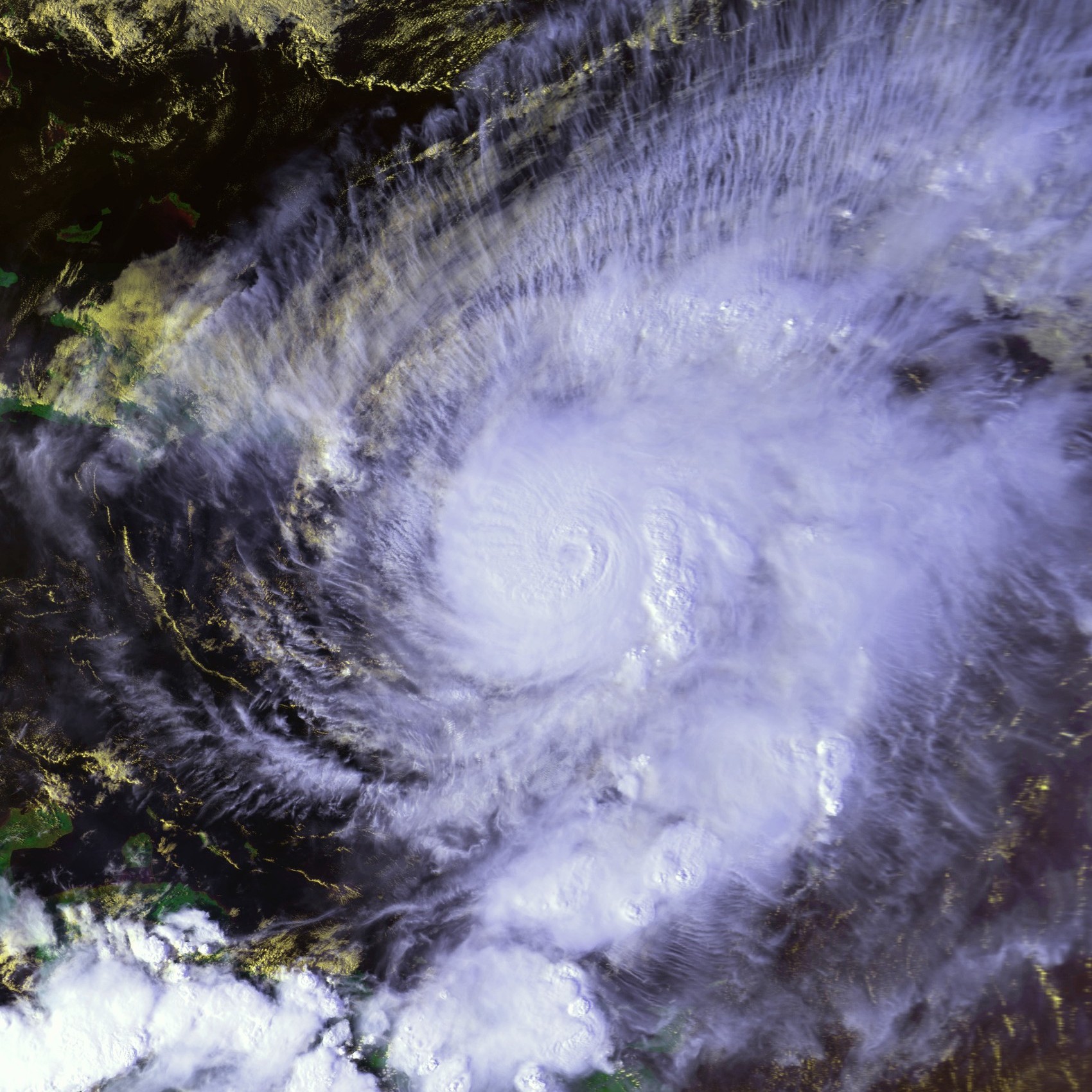 Track=Lenny 1999 track.pngHurricane Lenny was a damaging late season hurricane first named on November 13 while in the western . Lenny tracked generally east over the Caribbean, and is the only storm recorded to have done so for an extended period of time. Lenny was a Category 4 hurricane when it approached the Puerto Rico and the U.S. Virgin Islands on the 17th. Its motion slowed and began weakening as it passed over the , and Lenny made its final landfall in Antigua on the 19th. Lenny continued eastward on an erratic course into the Atlantic where it dissipated on November 23.

There are seventeen deaths directly attributed to Lenny, including two in . Damage to the islands was considerable, but no specific dollar value is attached to it. Damage to the US possessions is estimated at $330 million.

The table on the right shows the for each storm in the season. The ACE is, broadly speaking, a measure of the power of the hurricane multiplied by the length of time it existed for, so hurricanes that lasted a long time have higher ACEs.

The following names were used for named storms that formed in the north Atlantic in 1999. The names not retired from this list were used again in the 2005 season. It is the same list used for the 1993 season. A storm was named Lenny for the first (and only) time in 1999. Names that were not assigned are marked in tcname unused.

The retired two names in the spring of 2000: Floyd and Lenny. They were replaced in the 2005 season by Franklin and Lee.