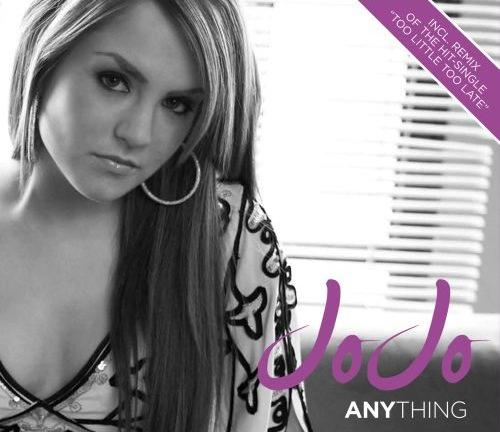 "Anything" is a pop–R&B song written by Beau Dozier, Mischke Butler, and Justin Trugman for American singer-songwriter JoJo's second studio album, "" (2006). Released as the album's third single in May 2007, the track contains a sample from Toto's 1982 song "Africa"—a former number-one single on the "Billboard" Hot 100—, written by and . The song premiered on March 19, 2006 on "The Second JammX Kids All Star Dance Special".

The single was the second official single from "The High Road" in an countries and was released in the on May 7, 2007; it began gaining airplay there on March 24, 2007, eventually debuting on 's playlist under the B-list section. JoJo was in the UK during the first two weeks of May to promote the single; she performed at 's on May 12, and appeared on "" on May 8 as part of a series of radio and television interviews. "Anything" remained in the top forty of the for three weeks.

The for "Anything" was expected to premiere on May 2, amidst fan speculation about whether there would be a video and if it would have a surprise premiere.Fact|date=May 2007 The JoJo UK street team had launched a competition for fans to make their own video for "Anything" that would appear on the when the single was released. The competition was won by Joao Vasconcelos. After this, fans believed it would be a budget video.weasel-inline On May 5, JoJo posted on her page that the video was not completed and that she had asked to facilitate the production process with her and her management. On May 9 it was announced via e-mail that member "TheHighRoad" won the video mission and his video would be placed on the official website, but fans who wanted to watch it would have to buy the CD because it "unlocks" the video.

;UK CD single
#"Anything"
#"Anything" (WaWa Club Mix)Also includes the winning fan videos for "Anything". Insert the CD into your computer and visit jojoonline.co.uk to access the exclusive content.