The periapical cyst (also termed Radicular cyst, and to a lesser extent Dental cyst) is the most common odontogenic cyst. It is caused by pulpal necrosis secondary to dental caries or trauma. The cyst lining is derived from the cell rests of Malassez. Usually, the periapical cyst is asymptomatic, but a secondary infection can cause pain. On radiographs, it appears a radiolucency (dark area) around the apex of a tooth's root.

Radicular Cyst is the most common odontogenic cystic lesion of inflammatory origin. It is also known as Periapical Cyst, Apical Periodontal Cyst, Root End Cyst or Dental Cyst. It arises from epithelial residues in periodontal ligament as a result of inflammation. The inflammation usually follows death of dental pulp. Radicular cysts are found at root apices of involved teeth. These cysts may persists even after extraction of offending tooth, such cysts are called Residual Cysts.

It is defined as an odontogenic cyst of Inflammatory origin that is preceded by a chronic periapical granuloma and stimulation of cell rests of malaseez present in the periodontal membrane.

It is classified as follows:

1) Periapical Cyst: These are the radicular cysts which are present at root apex.

2) Lateral Radicular Cyst:- These are the radicular cysts which are present at the opening of lateral accessory root canals of offending tooth.

3) Residual Cyst:- These are the radicular cysts which remains even after extraction of offending tooth. 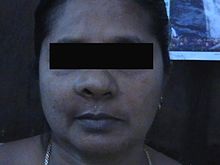 Patient of CT scan shown above

Dental cysts are usually caused due to root infection involving the tooth affected greatly by carious decay . The resulting pulpal necrosis causes release of toxins at the apex of the tooth leading to periapical inflammation. This inflammation leads to the formation of reactive inflammatory (scar) tissue called periapical granuloma further necrosis and damage stimulates the Malassez epithelial rests, which are found in the periodontal ligament, resulting in the formation of a cyst that may be infected or sterile (The epithelium undergoes necrosis and the granuloma becomes a cyst). These lesions can grow into large lesions because they apply pressure over the bone causing resorption . The toxins released by the breakdown of granulation tissue is one of the common causes of bone resorption.

These cysts are not true neoplasms

A Radicular Cyst presupposes physical, chemical or bacterial injury resulting in death of pulp followed by stimulation of epithelial cell rests of malaseez which are present normally in periodontal ligament.

Pathogenesis of Radicular Cyst is conveniently considered in 3 Phases, which are as follows

a) Respiratory epithelium of Maxillary sinus when periapical lesion communicates with sinus wall.

b) Oral epithelium from fistulous tract.

2) Phase of Cyst Formation:- It is a process by which cavity becomes lined by proliferating epithelium.

There are two theories regarding it which are as follows:-

a) Most widely accepted theory suggests that initial reaction leading to cyst formation is a proliferation of epithelial rests in periapical area involved by granuloma. As this proliferation continues with the epithelial mass increasing in size by division of the cells on periphery corresponding to basal layer of surface epithelium. The cells of central portion of mass become separated further & further from nutrition in comparison with basal layer due to which they fail to obtain sufficient nutrition, they eventually degenerate, become necrotic & liqify. This creates an epithelium lined cavity filled with fluid.

3) Phase of Cyst Enlargement:- Experimental work provided evidence that osmosis makes contribution to increase in size of cyst. Investigators found that fluids of Radicular cysts have Gamma Globulin level High by almost more than half to patient’s own serum. Plasma protein exudate & Hyaluronic acid as well as products of cell breakdown contribute to high osmotic pressure of cystic fluid on cyst walls which causes resorption of bone & enlargement of cyst.

Cyst may or may not be infected. Whenever infection is present Actinomyces organism have been isolated from radicular cyst commonly.

In Periapical lesions like Radicular cysts Obligate anaerobes are found.

Additionally in long-standing cases of periapical pathology a- hemolytic & non hemolytic streptococci are found along with obligate anaerobes.

Expansion of the cyst causes erosion of the floor of the maxillary sinus. As soon as it enters the maxillary antrum the expansion starts to occur a little faster because there is space available for expansion. Tapping the affected teeth will cause shooting pain. This is virtually diagnostic of pulpal infection.

A) Frequency:- It is most common cystic lesion of jaw comprising about approximately 52.3% of jaw cystic lesions

B) Age:- Large no. of cases are found in 4th & 5th decades of life after which there is gradual decline.

D) Race:-White patients are involved with a frequency of about twice that of Black patients.

E) Site:- It occurs with frequency of 60% in Maxilla. Though it may occur in all tooth bearing areas of both the jaws but preferably it occurs in maxillary anterior region. Upper lateral Incisors and Dense in Dente are usually the offending teeth. It occurs most commonly at apices of involved teeth. They may however be found at lateral accessory root canals.

Gross Specimen may be spheroidal or ovoid intact cystic masses, but often they are irregular & collapsed. The walls vary from extremely thin to a thickness of about 5mm. The inner surface may be smooth or corrugated yellow mural nodules of cholesterol may project into the cavity. The fluid contents are usually brown from breakdown of blood and when cholesterol crystals are present they impart a shimmering gold or straw colour.

Smaller radicular cysts are usually symptomless and are discovered when IOPAs are taken with non-vital teeth.

Larger lesions shows slowly enlarging swelling. At first the enlargement is bony hard but as cyst increases in size, the covering bone becomes very thin, despite subperiosteal deposition & swelling exhibits springiness, only when cyst has become completely eroded, the bone will show fluctuation.

In Maxilla, there may be buccal and palatal enlargement Whereas in mandible it is usually labial or buccal & only rarely lingual.

Pain & infection are other clinical features of some radicular cysts. These cysts are painless unless infected. However, complain of pain is also observed in patient without any evidence of infection.

Occasionally, a sinus may lead from cyst cavity to the oral mucosa

Quite often there may be more than one radicular cyst. Scientists believe that there are cyst prone individuals who show particular susceptibility to develop radicular cysts.

Radicular cysts arising from deciduous tooth are very rare.Deciduous tooth which had been treated endodontically with materials containing Formecresol which in combination with tissue protein is antigenic & may elicit a humoral or cell-mediated response like rapid buccal expansion of cyst.

On rare occasion, there may be occurrence of parasthesia or there may be pathologic fracture of jaw bone take place.

Radiographically it is virtually impossible to differentiate granuloma from a cyst. If the lesion is large it is more likely to be a cyst. Radiographically both granuloma and cyst appear radiolucent, associated with the apex of non vital tooth.

Radiographically, Radicular Cysts are round or ovoid radiolucent areas surrounded by a narrow radio-opaque margin, which extends from Lamina Dura of involved tooth. In infected or rapidly enlarging cysts, radio-opaque margins may not be seen. Root resorption is rare but may occur.

It is often difficult to differentiate radiologically between radicular cysts & apical granulomas.

Radiologic presentation of Radicular Cyst is given in detail as follows:

Periphery & Shape--- Periphery usually have a well defined cortical border. If Cyst is secondarily infected, the inflammatory reaction of surrounding bone may result in loss of this cortex or alteration of cortex into more sclerotic border. The outline of radicular cyst usually is curved or circular unless it is influenced by surrounding structures such as cortical boundaries.

Effects on surrounding structures--- If a radicular cyst is large, displacement and resorption of roots of adjacent teeth may occur. The resorption pattern may have a curved outline. In rare cases, the cyst may resorb the roots of related non-vital teeth. The cyst may invaginate the antrum, but there should be evidence of a cortical boundary between contents of cyst and internal structure of antrum. The outer cortical plates of maxilla and mandible may expand in a curved or circular shape. Cyst may displace the mandibular alveolar nerve canal in an inferior direction.

Histopathological Features:- The gross specimen may be spherical or ovoid intact cystic masses, but often they are irregular & collapsed. The walls vary from extremely thin to a thickness of about 5mm. The inner surface may be smooth or corrugated. The histopathological studies shows following features ---

1) Epithelial Lining :- Almost all radicular cysts are wholly or in part lined by stratified Squamous Epithelium & range in thickness from 1 to 50 cell layers. The only exception to this is in those rare cases of periapical lesions of Maxillary Sinus. In such cases, cyst is then lined with a pseudo stratified cilliated columnar epithelium or respiratory type of epithelium. Ortho or para keratinised linings are very rarely seen inradicular cysts. Secretory cells or ciliated cells are frequently found in epithelial lining.

2) Rushton’s Hyaline Bodies:- In approximately 10% of cases of radicular cysts, Rushton's Hyaline bodies are found in epithelial linings. Very rarely they are found in Fibrous capsule. The hyaline bodies are tiny linear or arc shaped bodies which are amorphous in structure, eosinophillic in reaction and Brittle in nature.

3) Cholesterol Clefts:- Deposition of Cholesterol crystals are found in many radicular cysts, slow but considerable amount of cholesterol accumulation could occur through degeneration and disintegration of lymphocytes, plasma cells & macrophages taking part in inflammatory process, with consequent release of Cholesterol from their walls.

The source (i.e., necrotic pulp) should be removed by full pulpectomy (i.e., root canal therapy) or extraction of the offended tooth, and the cyst should be enuclated.

Peripheral lesions including radicular cysts are eliminated by body once the causative agents are removed. Majority of radicular cysts can undergo resolutions following Root Canal Treatment & don't require surgical intervenation. It is suggested that insertion of file or other root canal instrument beyond the apical foramen (for 1-2mm) produces transitory acute inflammation which may destroy epithelial lining of radicular cyst & convert it in to granuloma. Thus, leading to its resolutions.

a) Enucleation- The affected tooth is extracted or preserved by root canal treatment with apicocetomy. A mucoperiosteal flap over cyst is raised & a window is opened in the bone to give adequate access. The cyst is carefully separated from its bony wall. The entire cyst is removed intact. the edges of bony cavity are smoothened off, free bleeding is controlled and cavity is irrigated to remove debris. Mucoperiosteal flap is replaced back and sutured in place.

b) Marsupialisation- The cyst is opened essentially as for enucleation but the epithelial lining is sutured to mucous membrane at margins of opening. The aim is to produce a self-cleansing cavity, which becomes an invagination of oral tissues. The cavity is initially packed with ribbon gauze & after margins are healed a plug or extension of denture is made to close the openings. The cavity usually closes by regrowth of surrounding tissues & restoration of normal contour of that part. However, there are always chances of closing the orifice & reformation of cyst. The main application is for temporary decompression of exceptionally large cyst where fracture of jaw is a risk factor. When enough new bone is formed, cyst can be enucleated.

Prognosis depends on particular tooth, the extent of bone destroyed & accessibility for treatment.

If Cyst have completely eroded the bone specially if it is present in posterior region which is very rare in case of Radicular Cyst it may cause pathologic jaw bone fracture.

Cyst may get secondarily infected and create further complications.