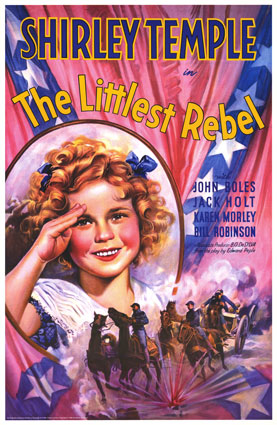 "The Littlest Rebel" is a 1935 comedy drama film directed by David Butler, starring child-actress . It was adapted from a play of the same name, written by . Shirley Temple plays the daughter of a rebel officer, Captain Herbert Cary, played by , who sneaks back to his rundown plantation to see his family, only to be arrested. A yankee takes pity on him and lets him escape. All of them are captured to be executed, when Temple's character, Virgie Cary, goes to president for help.

Film critic Hal Erickson, of the "" wrote "The stereotypical treatment of black characters in "" is more offensive than usual, with "happy darkies" nervously pondering the prospect of being freed from slavery and shivering in their boots when the Yankees arrive." [Erickson, Hal. [http://movies2.nytimes.com/movie/29703/The-Littlest-Rebel/ "The Littlest Rebel"] . ".] Bill Gibron, of the Online Film Critics Society, wrote: "The racism present in "The Littlest Rebel", "" and "Dimples" is enough to warrant a clear critical caveat." However Gibron, echoing most film critics who continue to see value in Temple's work despite the racism that is present in some of it, also wrote: "Thankfully, the talent at the center of these troubling takes is still worthwhile for some, anyway." [Gibron, Bill. [http://www.popmatters.com/film/features/060519-shirleytemple.shtml "Little Girl Lost"] . PopMatters.com. 19 May 2006.]