Short Circuit
This article is about the 1986 movie. For other uses, see Short Circuit (disambiguation).

Number 5 (voiced by Tim Blaney) is one of five prototype robots proposed for Cold War use by the U.S. military, although the scientist mainly responsible for creating them, Newton Graham Crosby, Ph.D. (Steve Guttenberg) and his partner Ben Jabituya (Fisher Stevens), are more interested in peaceful uses of their artificial intelligence, like playing musical instruments. While a demonstration takes place on the grounds of the developer's company, Nova Laboratories in Damon, Washington, a lightning storm forces an end to the presentation. A power surge hits Number 5 while it is recharging and alters its program, causing a malfunction. An associated accident causes it to be taken off company grounds and it wanders away, unable to communicate and not knowing where it is.

Number 5 finds itself at the home of animal-lover Stephanie Speck (Ally Sheedy) in Astoria, Oregon, who initially thinks the robot is an extraterrestrial visitor, but then determines that the robot was built by Nova. After she helps it satisfy its cravings for "input" (due to its malfunction), and explains the nature of life and death to it, Stephanie and the robot realize the power surge has brought the robot to life. The robot subsequently gains a respect for life, rejecting the destructive nature of its military programming, as well as a fear of the disassembly that awaits it back at Nova, believing it to be akin to death.

After several narrow escapes from a troop of soldiers led by Nova's security head Captain Skroeder (G. W. Bailey) — who in his attempt to destroy the wayward robot disobeys orders from Howard Marner (Austin Pendleton), the director of Nova — as well as from Stephanie's unscrupulous ex-boyfriend Frank, Stephanie and the robot finally convince Newton of the robot's sentience, but are cornered by the full weight of Nova's security and the Army, who seemingly destroy the robot. Unbeknownst to the soldiers, the robot they destroyed was a copy built by Number 5 from spare parts, and with the robot's "destruction," the project that spawned it is ruined and Skroeder is fired. Number 5 (who renames himself "Johnny 5" after hearing the song "Who's Johnny?" throughout the movie) leaves for Montana with Stephanie and Newton, who has subsequently quit his job after siding with the robot. 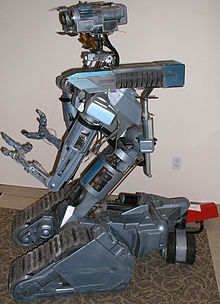 This film was conceived after the producers found success with an educational video about a robot that they created and distributed to local colleges. Studying other films with a prominent robot cast in them (like the Star Wars series) for inspiration, they decided to take a more realistic approach to the standard "living robot" plot, asking how people would truly react if a living robot appeared before them (with the theory that no one would believe for a second the robot was alive). As part of this, they purposely made Captain Skroeder the one taking the most rational action against the robot, having him do the "right" thing despite being a villain.

According to the commentary in the DVD, Johnny 5 was the most expensive part of the movie, requiring several different versions to be made for different sequences. Almost everything else in the movie was relatively inexpensive, allowing them to allocate as much money as they needed for the robot character. Johnny 5 was designed by Syd Mead, the "visual futurist" famous for his work on Blade Runner and Tron.

Most of the arm movements of Johnny 5 were controlled by a "telemetry suit", a metallic skeleton carried on the puppeteer's upper torso. Each joint in the suit had a separate sensor, allowing the puppeteer's arm and hand movements to be transferred directly to the machine. He was also voiced in real-time by his puppeteer, the director believing that it provided for a more realistic interaction between the robot and the other actors than putting in his voice in post-production, although a few of his lines were redubbed later.[citation needed]

Although no soundtrack album was released at the time, El DeBarge had a chart hit with the single "Who's Johnny (Theme from Short Circuit)."[1]

In 2008 Varèse Sarabande issued David Shire's score as part of their CD Club series of limited edition releases. The DeBarge song was not included (or mentioned in the liner notes); the last three tracks are source music. Curiously, the booklet claims the end title song isn't used in the movie, when it clearly is.

A video game developed by Ocean Software for ZX Spectrum,[2] Commodore 64[3] and Amstrad CPC[4] was also made based on the movie. It featured two parts, one arcade adventure where Johnny 5 had to escape from the lab, and one action part where Johnny 5 escapes across the countryside, avoiding soldiers and rabbits.

The movie had mostly positive reviews.[5] Short Circuit debuted at No.1 at the box office.[6]

The sequel, Short Circuit 2, premiered in 1988. There was a script for a possible third movie written in 1989 and rewritten in 1990, but it was found unsatisfactory by the producers, and the project was subsequently scrapped. Johnny 5 also makes an appearance in a commercial for Home and did a half-hour video called Hot Cars, Cold Facts.

In April 2008, Variety reported that Dimension Films had acquired the rights to remake the original film. Dan Milano had been hired to write the script, and David Foster to produce it. Foster said that the robot's visual look would not change.[7]

On October 27, 2009, it was announced that Steve Carr would direct the remake and that the film's plot would involve a boy from a broken family befriending the Number 5 robot.[8][9]

For reasons unknown, Carr left the project and on August 10, 2011, it was announced that Tim Hill would direct the reboot instead.[10]

The ending credit sequence features parts of scenes cut from the final product, a gimmick that predated the advent of director's cuts and optional deleted scenes in later DVDs. The scenes shown in the credits include an extended SAINT demonstration sequence, which would have included the robots flying remote-controlled airplanes, an encounter with a white, commercially-made Omnibot 2000, and a close encounter with "death" at a scrapyard. The latter two were from a cut sequence set between Number 5's theft of the Nova van in which he was being carted back by Ben, and his second arrival at Stephanie's house. In that sequence, the Nova van would have run out of fuel near the scrap yard, forcing Number 5 to abandon it and look for another suitable mode of transportation. The Omnibot in the former of the two scenes would have belonged to the scrap yard owner's children, who were to frighten Number 5 away with their comparisons between him and the Omnibot.