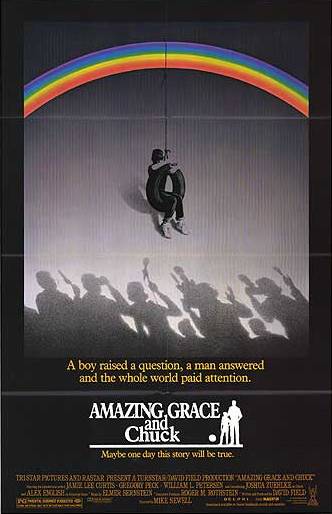 "Amazing Grace and Chuck" is a 1987 film in which Chuck, a 12-year-old boy protests the existence of nuclear weapons by refusing to play baseball, which results in the forfeit of a Little League Baseball game by his team. "Amazing Grace" Smith, a fictional basketball player, played by star , also joins him in his protest by resigning from professional basketball. This gives it nationwide coverage, and causes more athletes to join the protest against nuclear weapons. The film reaches a climax when the President of the United States, played by , is personally meeting with Chuck to admire his resolve in disarming nuclear weapons, but at the same time tell of the extreme difficulties of being vulnerable to the nuclear arsenals of the . The story is set in the U.S.A.