Air Raid was the name of three in the .


voiceby = (English)
(Japanese)Air Raid is the most fearless of the Aerialbots and likes having fun. He caries air-to-air heat-seeking missiles and uses a torque rifle He combines with his fellow Aerialbots to form . [ [http://www.seibertron.com/database/character.php?view=&char_id=64 Air Raid (Autobot Aerialbots, Transformers G1) ] ]

The Aerialbots were created on around the same time as the as a countermeasure to the new Decepticon car team. They are the Autobots' first combiner team, and when merged to form Superion, also considered their strongest combiner. Unlike the Decepticons' combiner team the Constructicons, their configuration is comprised of five transformers instead of six, or also known as Scramble City in Japan.

Their first appearance comes in the two-parter Key to Vector Sigma, pts. 1 & 2. They were created to combat the Stunticons. During the fight, the Autobots were badly overpowered by the Stunticons when the newly-formed Aerialbots arrived and battled them. The Stunticons were no match for the Aerialbots and their aeroplane alternate-modes, but once they merged and formed the Decepticon Menasor, things got out of hand. However, the Aerialbots had their own combination, soon they too formed their own combiner, Superion, to combat Menasor. The two battled, but Menasor began to take the upper hand. Menasor was about to land a fatal blow to the Autobot when arrived, and helped Superion to defeat him, forcing the Stunticons and the Decepticons to retreat.

The Aerialbots and Stunticons squared-off again, later in the episode Cosmic Rust, where Superion defeated Menasor in a Combiner vs. Combiner rivalry.

Later on, in the episode War Dawn, they were sent back in time 9 million years ago by the Decepticons in an attempt to lose the Aerialbots forever in the dawn of time. At first, they question the motives of the Autobots. But after a series of events, and seeing Megatron's cruelty in the past, they witnessed death of a young Autobot named Orion Pax, who was rebuilt by Alpha Trion as their leader, Optimus Prime. They become convinced, and finally accept the ways of the Autobots.

In the episode The Rebirth Part 1, the Aerialbots are put into stasis lock by the Decepticon Sixshot. As the Decepticons arrive and invade Cybertron, they encounter the Aerialbots, who are patrolling the planet. Galvatron orders Sixshot to deal with them, and he easily takes down each of the five Autobots using a different alternate mode. Using the Aerialbots' parts and components, the Decepticons were then able to construct a super engine to move the planet Cybertron.

Air Raid and the other Aerialbots were created on Earth by Wheeljack and given life by Optimus Prime using the Matrix.

, , , , , and were part of an Autobot team on Cybertron in the Earth year 1986. They battled the Decepticons lead by Straxus over the Space Bridge and the Autobots were stranded on Earth (Transformers #18).

They were then captured by Circuit Breaker and her Rapid Anti-Robot Attack Team, She then took them to her laboratory and dismantled them for study. (Transformers #21-22).

When Starscream returns to Earth after absorbing the powers of the Underbase, the Aerialbots were amongst those in New York first to attack... and also amongst the first to fall in battle.

Unlike previous interpretations of the Generation 1 Air Raid, Dreamwave comics had all the Aerialbots being made on Cybertron before the Autobots came to Earth. They were one of several teams that used the combiner technology first used to create Devastator to make their own combined form.

The Aerialbots came to be among the Autobots on Earth in the 1980's and gained the forms of Earth-style jets.

Upon the awakening of Optimus Prime in Dreamwave's first Generation 1 mini-series, the Aerialbots were among the Autobots summoned by Optimus to rescue the remaining Autobots, who had been turned into mind-controlled weapons of mass destruction by a human arms dealer. During a subsequent battle with the Decepticons in San Francisco, the Aerialbots, merged into Superion, sacrificed themselves to stop an incoming nuclear missile, launched by rogue elements in the U.S. military to eradicate both factions of Cybertronians in one fell swoop.

Later, it was revealed that parts of Superion, including his head, were recovered by the faction of the U.S. government that also recovered Scourge. Hinting that they were possibly trying to rebuild him.

*Generation 2 Air Raid (1994):The original toy is repainted as Air Raid again in 1994. He is now mainly blue and white. He retains his original function, motto and bio. Although Air Raid did appear in the Marvel Generation 2 comic, he appeared in his original colors.:In 1995 Hasbro seemed to realize that classic characters sold better than new ones, so they repainted the Decepticon Cyberjet Skyjack slightly making it new for the Autobot Air Raid, giving it nearly the same bio, mottos and function as the original Generation 1 character. This version of Air Raid turned into a stealth bomber. This toy was recolored into Robot Masters .

*Universe Air Raid (2004):In 2004 Air Raid made his way into for the first time, a blue repaint of his form. He came packaged with Universe , a Cyberjet. Although no bio or fiction was ever presented for his Air Raid, most fans assume it's the same as the Generation 2 Cyberjet because he has the same name and mold.

*Universe Classic Series Scout Air Raid (2008/not released yet):Leaked pictures have made it to the internet of a redeco of the "Energon" Aerialbots done in the colors of the "Generation 1" Aerialbots, however their existance has not yet been confirmed by Hasbro. [http://www.seibertron.com/transformers/news/universe-superion-maximus-repaint-/13817/]

Although released under the name by Hasbro, this member of the Energon Aerialbot team was called Air Raider in Japan, and his black colors seemed to make him a clear homage to Generation 1 Air Raid. Treadshot combines with his fellow Aerialbots to form .

Energon Treadshot was repackaged for Universe, with no changes to the toy. 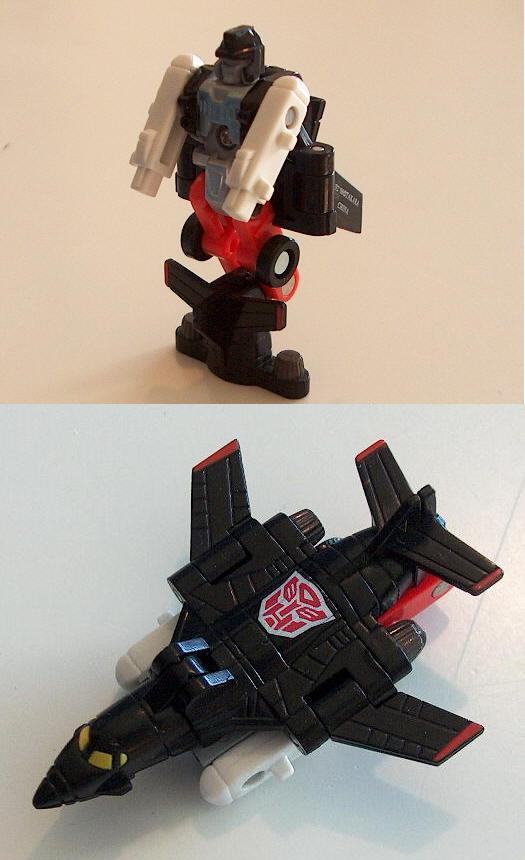 voiceby =The name Air Raid was used on a Micromaster combiner as part of the Aerialbot group. This toy is a repaint of the Japanese exclusive Micromaster Missile Run, and somes with the waist of Superion.

However, because of a lack of a bio on the card packaging or from Hasbro themselves, it is not known whether this Air Raid is a previous character or a new character. The original Air Raid was part of the Aerialbots however there is already an Air Raid in this toyline. Air Raid did not appear in any fiction.

Missile Run's Japanese tech spec says he's a schemer and the team's tactical officer. He has high-performance stealth abilities. With his strategical instructions he can provide more precise orders than the team leader, Chaingun. Harbors a strong rivalry with Diego of the Six-Liner Team.

Air Raid's biography paints him as a criminal hunter who tracks Decepticons.

In the Decepticon barely made it to the Nemesis on Mars before he ran out of power. His return was noted by the Autobot Cosmos, who alerted , , Smokescreen, Camshaft and Air Raid. Aided by on the Nemesis Starscream recovered and sent the information Frenzy had gathered back to Cybertron just as Hardtop spotted the Autobots closing on the Nemesis.

*Movie Air Raid (2007):He is a redeco of "Energon" . Oddly the picture of Air Raid used for promotions for the toy box were of a prototype of the toy with different feet. This toy was a Target store exclusive.