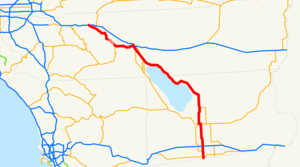 State Route 111 is the main north/south state highway and retail corridor through the , a part of the in the southeastern corner of the state and famous as a resort destination. It runs from Calexico to Palm Springs.

First proposed in the early 1930s due to the area's growth bought on by the , Highway 111 links virtually every desert resort city in the valley. It begins at a junction with Interstate 10 near the foot of east of the . Continuing south, the highway first enters Palm Springs, becoming a surface street. This junction was so busy in the 1950s before the construction of the freeway that visitors returning home to Los Angeles might have waited as long as two hours to make the left turn on the two-lane road that was once multiplexed as US Highways 60, 70 and 99. 111 then continues through Cathedral City, Rancho Mirage, Palm Desert, La Quinta, Indio and finally Coachella where it is co-signed with State Route 86 before exiting the southeast corner of the valley as a two-lane highway. A 1993 rerouting of the highway takes drivers away from the historic center of Palm Springs, but meets with its original alignment as Business Route 111 a few miles further south.

A nearly 40 mile (64 km) length of the highway dotted with date and citrus groves follows both the old Southern Pacific "Sunset Route" (now the main line between Los Angeles and ) and the eastern shore of the . Though some small settlements and a California state park line the shore, the area is eerily empty due to the sea's rapidly declining water quality. The small town of North Shore is all but abandoned.

As Route 111 continues southward into , it passes through the agricultural communities of Niland, Calipatria, Brawley and Holtville before entering El Centro. It rejoins 86 in Heber and terminates in Calexico at the international border where it meets with Mexico 5 in .

As the Coachella Valley's main retail corridor and link to its many resorts, a trip along Route 111 during the height of the tourist season from September to June can be a trying one due to out-of-town traffic, or as the locals fondly refer to them, "snowbirds".

After a two-year delay, signs on Verbenia Avenue at the highway's northern terminus and along Interstate 10 were changed in November 2005 to reflect the street's name change to "Haugen-Lehmann Way", honoring two Riverside County sheriff's deputies gunned down by a sniper on that street in 1997.

In a similar move in December 2005, the stretch of SR111 through La Quinta was named the "Deputy Bruce Lee Memorial Highway". Lee was a Riverside County deputy sheriff in the city for many years and was killed in 2003 during an altercation with a mentally disturbed suspect. The suspect was able to take Lee's baton during the altercation and used it to bludgeon the officer.

In 1995, Caltrans was allowed to relinquish any portion of Route 111 through a city for that city to maintain. The legislature opted to make the act an "urgency statute", effective immediately, so that the local governments could improve traffic bottlenecks along the route as soon as possible. [cite CAstat|year=1995|ch=20] The legislative definition of the route was amended in 1996 to exclude the portions in Rancho Mirage and Cathedral City, which had both been relinquished. [cite CAstat|year=1996|ch=1154] Cathedral City completed a redesign in 1998. [Pedestrian and Bicycle Information Center, [http://www.walkinginfo.org/pedsafe/casestudy.cfm?CS_NUM=21 Pedestrian-Friendly Redesign: Cathedral City, CA] , accessed December 2007]

A 2003 law did not change the route, but clarified that the former highway through those cities could not be taken back by the state, and repealed the section added in 1995 allowing relinquisment to any city. [cite CAstat|year=2003|ch=525] Subsequently, in 2005, the legislature allowed relinquishment within Indian Wells, Indio, and Palm Desert, subject to the same conditions, and to the condition that the cities must maintain signs for the route. [cite CAstat|year=2005|ch=594] La Quinta was added to the list of eligible cities in 2007. [cite CAstat|year=2007|ch=718] As of late 2007, none of these four cities have taken over maintenance of Route 111.Fact|date=December 2007