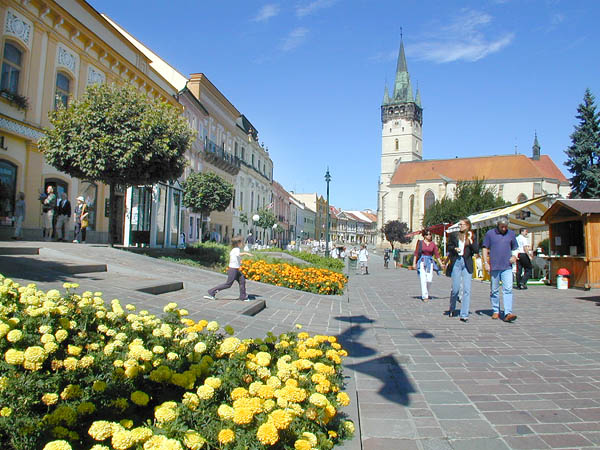 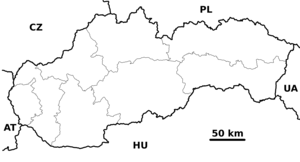 Prešov (Audio|Presov.ogg|pronunciation; known also by alternative names) is a in eastern . It is the seat of the administrative ( _sk. Prešovský kraj). With a population of approximately 91,000, it is the third-largest city in the country.

The city name originates in the Hungarian word "eper"which means .

The city is a showcase of , and . In the historical center, the main street is lined with churches and other buildings built in these styles. In the suburbs, however, the influence is clearly evident through the massive concrete apartment buildings (the y) of the Sídliská (housing estates) and the Sekčov district. More Soviet-style architecture is seen in the government buildings near the city center.

Significant industries in the city include mechanical and electrical engineering companies and the clothing industry. Solivary, the only salt mining and processing company in Slovakia, also operates in the city. The city is a seat of an Orthodox archbishopric.

Many concerts, operas, operettas and stage plays are performed at the new building of the Jonáš Záborský Theatre (Divadlo Jonáša Záborského), as well as at the older theatre premises.

Habitation in the region of Prešov dates as far back as the period. The oldest discovered tools and bones are 28,000 years old. The continuous settlement dates to the 8th century.

By the end of the 11th century the town had become part of the , and Hungarian soldiers settled in the town. According to the legend today's was founded in 1132 by King of Hungary, Blind Béla [cite web | publisher = Protestáns Honlap| url=http://www.lutheran.hu/z/honlapok/protestans/felvidek/eperjes| title = Eperjes (Prešov, Eperies Sk) | date = | accessdate = 13 August | accessyear = 2008 | language = Hungarian, Slovak, German, English] and named after strawberries planted nearby. [Tibor Horváth, "Szlovákia", p. 140 (Hungarian)] In the 13th century many German settlers moved to Prešov from the region, after the Mongol invasions of 1241. The first written record of Prešov dates back to 1247 in a document of the King Béla IV, when it was mentioned as "Epuries". At that time it was a village belonging to the nearby . [cite web | publisher = City of Prešov | url = http://www.presov.sk/article.php?i_id_article=3258 | title = Prešov - Prior to The Grant of The City privileges | date = no date | accessdate = 2008-03-18] In 1299 Prešov received municipal privileges from Andrew III, and in 1374 it was declared a . This led to the development of crafts and trade (especially the export of wine from the region to ). In the 15th century Prešov joined the , an alliance of five towns of eastern Slovakia (, , Košice, Prešov, and ).

The first record of a school dates to 1429. In 1572, salt mining began in Solivar (at that time a nearby town, now part of Prešov). Prešov's increased importance meant that in 1647 it became the seat of the county.

In 1667 the important Evangelic Lutheran College of Prešov was established by Lutherans in the town. In 1687 twenty four prominent citizens and noblemen were executed for supporting the uprising of .

At the beginning of the 18th century, the population was decimated by the and by fires to a mere 2,000 inhabitants. By the second half of the century the town had recovered, crafts and trade improved again, and new factories were built. In 1752 the salt mine in Solivar was flooded. Ever since then salt has been produced from salt brine through boiling.

In 1870 the first railway was built to the town from . At the end of the 19th century, the town introduced electricity, telephone, telegraph, and a sewage system. In 1887 fire destroyed a large part of the town. In 1918 Prešov became part of the newly created . During , the nearby town of Košice became again part of Hungary by the . As a result, many institutions moved from Košice to Prešov, thus increasing its importance. In 1944, a professional Slovak Theatre was established in Prešov.

Before Prešov had a large ish population, and housed a major Jewish museum. Plaques in the town hall and a memorial in the surviving record that 6,400 Jews were deported from the town under the government of the to the s run by the regime of Germany.

Institutions of tertiary education in the city are the with 12,549 students, including 867 doctoral students.

Prešov is twinned with: