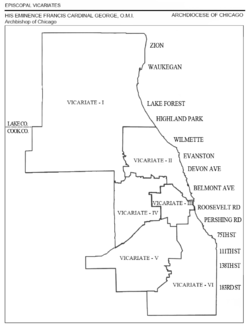 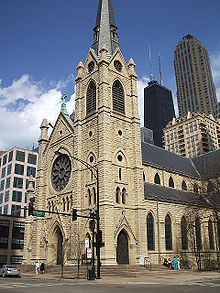 The Archdiocese of Chicago was established as a diocese in 1843 and as an Archdiocese in 1880. It serves more than 2.3 million Catholics in Cook and Lake counties in Northeastern Illinois, a geographic area of 1,411 square miles. The Archdiocese is divided into six vicariates and 31 deaneries. This local church is shepherded by Francis Cardinal George, OMI, assisted by six Episcopal Vicars, each responsible for a vicariate (region).

Cardinal George is the first Chicago native to become Archbishop of Chicago. Installed in May 1997, he became the thirteenth Ordinary for Chicago since its establishment as a diocese. Cardinal George is a member of the Missionary Oblates of Mary Immaculate and is the sixth Cardinal to lead the Archdiocese of Chicago. 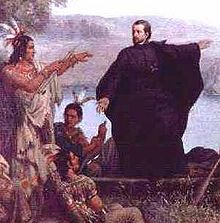 French Jesuit missionary Rev. Jacques Marquette, SJ first explored the area that is now Chicago in the mid-17th century. On December 4, 1674, Father Marquette arrived at the mouth of the Chicago River where he built a cabin to recuperate from his travels. His cabin became the first European settlement in the area now known as Chicago. Marquette published his survey of the new territories, and soon, more French missionaries and settlers arrived.[1]

In 1795, the Potawatomi tribe signed the Treaty of Greenville that ceded to the United States a tract of land at the mouth of the Chicago River. There in 1804, Fort Dearborn was erected and protected newly arrived Catholic pioneers. In 1822, Alexander Beaubien became the first person to be baptized in Chicago. In 1833, Jesuit missionaries wrote a letter to Most Rev. Joseph Rosati, Bishop of Saint Louis and Vicar General of Bardstown, pleading for the appointment of a resident pastor to serve over one hundred professing Roman Catholics living in Chicago. Rosati appointed a diocesan priest, Rev. John Mary Irenaeus Saint Cyr. Fr. Saint Cyr celebrated his first mass in a log cabin owned by the Beaubien family on Lake Street, near Market Street, in 1833.[2]

At the cost of four hundred dollars, Father Saint Cyr purchased a plot of land on what is now the intersection of Lake and State Street s and constructed a church building of 25 by 35 feet (7.6 by 11 m). It was dedicated in October 1833. The following year, the Bishop of Vincennes visited Chicago, where he found over 400 Catholics with only one priest to serve them all. The bishop asked permission from Bishop Rosati to send Fathers Fischer, Shaefer, Saint Palais, Dupontavice, and Joliet from Vincennes to tend to the needs of the Chicago region. In 1837, Fr. Saint Cyr was allowed to retire and was replaced by Chicago's first English-speaking priest, Rev. James Timothy O'Meara. Father O'Meara moved the church built by Fr. Saint Cyr to what is now the intersection of Wabash Avenue and Madison Street. When Fr. O'Meara left Chicago, Saint Palais tore down the church and replaced it with a new brick structure.[3] 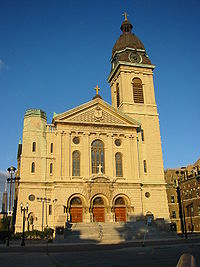 The First Plenary Council of Baltimore concluded that the Roman Catholic population of Chicago was growing exponentially and was in dire need of an episcopal see of its own. With the consent of Pope Gregory XVI, the Diocese of Chicago was canonically erected on November 28, 1843. In 1844, William Quarter of Ireland was appointed as the first Bishop of Chicago. Upon his arrival, Quarter summoned a synod of thirty-two Chicago priests to begin the organization of the diocese.[2] One of Quarter's most important achievements was his successful petitioning for the passage of an Illinois state law in 1845 that declared the Bishop of Chicago an incorporated entity, a corporation sole, with power to hold real and other property in trust for religious purposes.[4] This allowed the bishop to pursue mass construction of new churches, colleges and universities to serve the needs of Chicago's Roman Catholic faithful.[5] After four years of service as Bishop of Chicago, Bishop Quarter died on April 10, 1848.[5]

The church lost nearly a million dollars in church property in the Chicago fire of 1871, leading to administrative instability for decades to come.[6]

Our Lady of the Angels fire 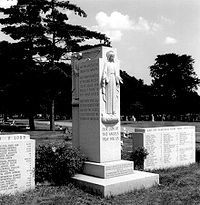 The Our Lady of the Angels School Fire occurred at the Our Lady of Angels School on December 1, 1958 in the Humboldt Park area of western Chicago. The school, which was operated by the Archdiocese, lost 92 students and three nuns in five classrooms on the second floor.

Before the establishment of the Archbishop's Residence, the Bishops of Chicago were in residence at a home on LaSalle Street and North Avenue.

Coadjutor bishops (who did not become diocesan bishop) 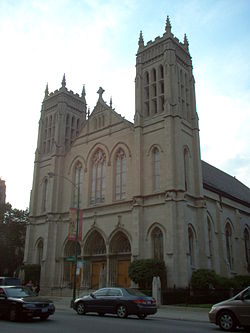 Our Lady of Mount Carmel in Lake View East is mother church of a Chicago vicariate, residence of the auxiliary bishop.

Bishops who once were priests of the Archdiocese of Chicago

The following men began their service as priests in Chicago before being appointed bishops elsewhere:

Structure of the Archdiocese

Administrative Council to the Archbishop

Departments, agencies and offices include: 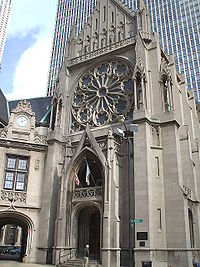 The school construction boom ended when Cardinal John Cody, the archbishop at the time, decided to limit construction of Catholic schools in Lake County and suburban areas in Cook County. Due to changes in demographics, the archdiocese has since closed more than half of its urban schools since 1966.[9]

See: List of the Roman Catholic bishops of the United States#Province of Chicago