State Route 92 (SR 92) is an east-west highway in the San Francisco Bay area between Half Moon Bay near the coast (and State Route 1) in the west and downtown Hayward at its junction with State Route 238 and State Route 185. It is most notable for being the route that traverses the San Mateo Bridge. It has interchanges with three freeways: Interstate 280 (the Junipero Serra Freeway), U.S. Route 101 (the Bayshore Freeway) in or near San Mateo, and Interstate 880 (the Nimitz Freeway). It also connects indirectly to Interstates 238 and 580 by way of Hayward's Foothill Boulevard, which carries Route 238 and flows directly into Route 92.

This route is part of the California Freeway and Expressway System[3] and is eligible for the State Scenic Highway System.[4] However, it is not a scenic highway as defined by Caltrans.[5]

SR 92 traversing over the Coast Range

Between Half Moon Bay and Interstate 280, Route 92 winds through the Coast Range as a narrow, mainly undivided two and three lane highway with a switchback turn. The east-bound uphill portion was upgraded with a long passing lane. Between Interstate 280 and Interstate 880 it is entirely a divided multilane highway, including the toll San Mateo-Hayward Bridge, the longest span across the San Francisco Bay. East of Interstate 880 the route becomes a divided surface street in Hayward, locally known as Jackson Street.

All of Route 92 that is not already a freeway or a toll bridge has been proposed as a freeway, none of which has been built. An upgrade of the intersection with Main Street in Half Moon Bay is in the late planning stage. The old cloverleaf interchange with Interstate 880 was rebuilt with direct ramp replacements for two of the tight "cloverleaf" ramps, and a new wider and taller overpass to carry Route 92 over Interstate 880. The project took four years, and was completed in October 2011.[6] 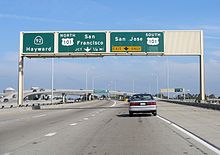 The freeway segment of SR 92 in San Mateo

State Route 92 traverses through significant habitat areas including wetland, California oak woodland, chaparral and grassland. In one serpentine soil location near Crystal Springs Reservoir, it passes near one of the only known colonies of the endangered wildflower Pentachaeta bellidiflora and near one of the limited number of colonies of the endangered Eriophyllum latilobum.

The San Mateo section was once referred to as the 19th Avenue Freeway which was the street name where the freeway now exits. Parts of the street remain. This section is also known as the J. Arthur Younger Freeway. [1]