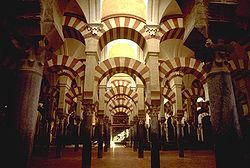 Interior of the Mezquita, Cordoba

Moorish architecture is the western term used to describe the articulated Berber-Islamic architecture of North Africa and Al-Andalus.

Among the surviving examples are the Mezquita in Cordoba (784-987, in four phases); the Alhambra (mainly 1338-1390[1]) and Generalife (1302–9 and 1313–24) in Granada and the Giralda in Seville in 1184;[2] Paderne Castle in the Algarve, Portugal; the mosque of Koutoubia and University of Al-Karaouine in Morocco; the Great Mosque of Algiers and the Great Mosque of Tlemcen in Algeria; and the Mosque of Uqba in Kairouan, Tunisia.

Other notable examples include the ruined palace city of Medina Azahara (936-1010), the church (former mosque) San Cristo de la Luz in Toledo, the Aljafería in Zaragoza and baths at for example Ronda and Alhama de Granada.

The term is sometimes used to include the products of the Islamic civilisation of Southern Italy.[3] The Palazzo dei Normanni in Sicily was begun in the 9th century by the Emir of Palermo.

There is archeological evidence of an eighth century mosque in Narbonne, France.[4] 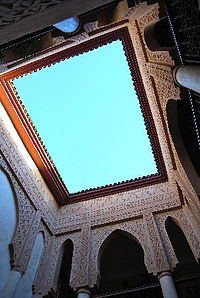 The Cooling effect of the Riad Laksiba Courtyard is no accident. Design: A water feature at the base of a Riad courtyard serves two purposes. Firstly, the obvious focal point but more importantly, the courtyards oper-air aperture channels warm air entering into the Riad which inturn passes over the water feature, cools down, thus assisting in the convection of heat to exit back through the Riad's open-air aperture. This style of natural air-conditioning has been prevelent in Morocco for millenia and is remarkably sucessful

Riads are inward focused, which allowed for family privacy and protection from the weather in Morocco. This inward focus was expressed in the central location of most of the interior gardens and courtyards and the lack of large windows on the exterior clay or mud brick walls. This design principle found support in Islamic notions of privacy, and hijab for women. Entrance to these houses is a major transitional experience and encourages reflection because all of the rooms open into the central atrium space. In the central garden of traditional riads there are often four orange or lemon trees and possibly a fountain. The walls of the riads are adorned with tadelakt plaster and zellige tiles, usually with Arabic calligraphy, with quotes from the Quran.

The style of these riads has changed over the years, but the basic form is still used in designs today. Recently there has been a surge in interest in this form of house after a new vogue of renovation in towns such as Marrakech, Fez and Essaouira where many of these often-crumbling buildings have been restored to their former glory. Many riads are now used as hotels or restaurants.