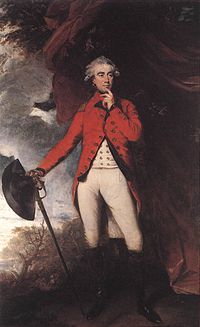 Marquess of Hastings was a title in the Peerage of the United Kingdom. It was created on 6 December 1816 for Francis Rawdon-Hastings, 2nd Earl of Moira. The Rawdon family descended from Francis Rawdon (d. 1668), of Rawdon, Yorkshire. His son George Rawdon settled in the village of Moira in Downshire, and thus became part of the Protestant Ascendancy. On 20 May 1665 he was created a Baronet, of Moira, in the County of Down, in the Baronetage of England. His son, the second Baronet, and grandson, the thired Baronet, both represented County Down in the Irish House of Commons. The latter was succeeded by his son, Sir John Rawdon, 4th Baronet. He was created Baron Rawdon, of Moira in the County of Down, in 1750, and Earl of Moira in 1762. Both titles were in the Peerage of Ireland. Lord Moira married as his third wife Elizabeth Hastings, 12th Baroness Hastings, 16th Baroness Botreaux, 11th Baroness Hungerford and 10th Baroness de Moleyns, daughter of Theophilus Hastings, 9th Earl of Huntingdon. Their son Francis Rawdon was a prominent soldier and colonial administrator. He was created Baron Rawdon, of Rawdon, in the County of York, in his own right in the Peerage of Great Britain in 1783, ten years before inheriting the earldom from his father.[1] He assumed the additional surname of Hastings in 1789 in accordance with the will of his uncle Francis Hastings, 10th Earl of Huntingdon. In 1808 he succeeded his mother in the baronies of Hastings, Botreaux, Hungerford and de Moleyns. In 1816 he was created Viscount Loudoun, Earl of Rawdon and Marquess of Hastings in the Peerage of the United Kingdom.[2] Lord Hastings married Flora Mure-Campbell, 6th Countess of Loudoun.