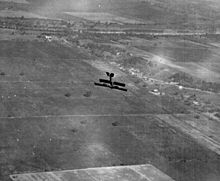 A Curtiss Jenny on a training flight

The Wright brothers took keen interest in the competition, sending the lesser known Lorin Wright to spy and take photographs at the New York facility for a 1914 lawsuit.[1]

Students would work toward completing the Aero Club of America pilot's license. The initial cost was one dollar a minute for the four hundred-minute course. In 1917 the U.S. Army took over operations during WWI. After the war, control went back to Curtiss, who closed Newport operations in 1922.[2]

A large variety of aircraft were used for training, mostly designed and built by Curtiss, and still undergoing flight testing. Among the fleet included the first aircraft to take off from water.[3]

By 1929, the Aeronautical Chamber of Commerce took over licensing of aviation schools. Curtiss schools were registered and required to give two weeks of ground school instruction to new pilots.[4]