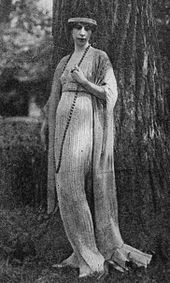 Mrs Condé Nast wearing one of the Fortuny tea gowns. This one has no tunic but is finely pleated, in the Fortuny manner, and falls in long lines, closely following the figure, to the floor.

Fortuny was born to an artistic family in Granada, Spain. His father, a genre painter, died when Fortuny was three years old and his mother, daughter of another famous painter, Raimundo de Madrazo y Garreta, moved the family to Paris, France. It became apparent at a young age that Fortuny was a talented artist, as he, too, showed a talent for painting. The family moved again in 1889 to Venice, Italy. As a young man, Fortuny traveled throughout Europe seeking out artists he admired, among them the German composer Richard Wagner. Fortuny became quite varied in his talents, some of them including painting, photography, sculpting, architecture, etching and even theatrical stage lighting. In 1897, he met the woman he would marry, Henriette Negrin, in Paris.

He died in his home in Venice and was buried in the Campo Verano in Rome. His work was a source of inspiration to the French novelist Marcel Proust.[1]

The life of the Fortuny saga has been depicted in Pere Gimferrer's novel "Fortuny".[citation needed]

Fortuny as a lighting engineer

In 1892, after seeing some of Richard Wagner’s work in Paris, Fortuny traveled to Bayreuth, Germany where Wagner had built a theater specifically designed to put on his operas. He was mesmerized by Wagner’s work and began to paint scenes for his operas when he returned to Venice. In Wagnerian drama, painting, architecture, song, dance, and poetry all worked together towards a common goal. This affected Fortuny’s outlook and was the inspiration for a brand new type of theater design where the designer and the technician would work together on a project from idea to realization. Fortuny and other followers of this concept believed that one can only improve the quality of a product by having a good knowledge of something’s raw materials and the process of its construction. He also thought that the best type of design was created when the artist knew how to realize the design and controlled all of the steps in the creative process.

Through his experiences with Wagner and the theatre, Fortuny became a lighting engineer, architect, inventor, director, and set designer. As a set designer, he wanted to create a more seamless way of transitioning from one scene to another other than flying out a backdrop and bringing in a new one. He began experimenting with light and different ways to do this in the attic of his palazzo in Italy. With his experimentation, he found that reflecting light off of different surfaces could change the color, intensity and other properties of light. He used indirect lighting techniques in his new invention, the Fortuny cyclorama dome, a quarter dome shaped structure of plaster or cloth. The shape created the look of a more extensive sky and Fortuny could create any type of sky he wanted by reflecting light onto it in a certain way. He could even reflect clouds on the backdrop by painting different things on the mirrors that reflected light onto the dome. Fortuny stated that, “Theatrical scenery will be able to transform itself in tune with music, within the latter’s domain, that is to say in ‘time’, whereas hitherto it has only been able to develop in ‘space’”. All that had to be done to change the scenery was that a stagehand had to change the controls for different effects and color mixing. From the same concept of the dome, Fortuny created a lamp that could be used to recreate indoor lighting onstage. The Fortuny cyclorama dome and the Fortuny lamp are Fortuny’s greatest contributions to theatre.

Fortuny as a fashion designer

The achievements that Fortuny is most well known for were made in the field of fashion design. His wife, Henrietta, was an experienced dressmaker who helped to construct many of his designs. They lived in a palazzo in Venice that Fortuny filled with the artwork of his father, art that his father collected, and other art and artifacts that inspired him. He called the palazzo his “think tank” where he had many rooms set up for experiments and inventions as well as rooms for inspiration. Fortuny drew from styles of the past for his fashion design as well, inspired by the light, airy clothing of Greek women that clung to the body and accentuated the natural curves and shape of a woman’s body.

Fortuny rebelled against the style lines that were popular during his time period and created the Delphos dress, a shift dress made of finely pleated silk weighed down by glass beads that held its shape and flowed on the body. The pleating that he used was all done by hand and no one has been able to recreate pleating that is as fine as his or has held its shape like his dresses have for many years. He also manufactured his own dyes and pigments for his fabrics using ancient methods. With these dyes he began printing on velvets and silks and dyed them using a press that he invented with wooden blocks that he engraved the pattern onto. His dresses are seen as fine works of art today and many survive, still pleated, in museums and many people’s personal collections. 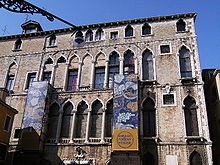 Nowadays the Fortuny Museum is housed in the Venetian Gothic palazzo in Venice, the former home, studio, showroom and "Think-Tank" of Mariano Fortuny, who acquired it at the beginning of the 20th century. Fortuny invented in his Palazzo the Delphos gown, a gown based on the ancient Grecian style; and the Knossos Scarf, a silk scarf also inspired by this civilization. Fortuny also created new methods of dying textiles and well as ways of printing on fabrics. He created the Fortuny cyclorama dome, a stage lighting innovation that could be used to create lighting effects such as a bright sky or a faint dusk; and the Fortuny lamp, for indoor lighting.

Fortuny also is remembered for his brightly coloured pleated gowns. He was an eclectic art-collector of everyday objects and works of art derived from every phase of artistic evolution and an organizer of lectures, concerts and discussions. The museum and the city of Venice organized in 2007 the exhibition Artempo, following the spirit from Fortuny and the palazzo as a "Laboratory of Ideas". In 2009, the museum organized a second exhibition entitled In-Finitum.[citation needed]